"I am very disappointed"

✅ Trip Verified | My original flight that was supposed to arrive in Eugene at 4pm was cancelled and they put me on a new set of flights that added 4+ hours to my travels and has me arriving at 9pm. By the time they put me on the new flight, all the free seats were taken so I had to pay $100+ extra just to secure seats on both these flights for the cheapest available seats. I arrive with my carry on that I have used as a carry on over 4 times with United and at the gate they tell me it is too late and make me pay an additional $45 for it to be checked. I am very disappointed that I have to pay all this extra money when United messed up and cancelled my flight to begin with. At the very least I should have been offered free seats since I had free seats on my previous cancelled flight.
1/10

"stuck me way in the back"

✅ Trip Verified | Bought tickets with my wife from Denver to Lihue Hawaii returning home. When checking in they put my wife in the middle with some random guy and stuck me way in the back! Didn’t care when asked for a move. Work bought the ticket. Hopefully they will not use this airline anymore.
1/10

"Worst airline I ever been on"

Not Verified | Worst airline I ever been on. They cancelled my flight after I checked my bags and paid for airport parking and they are now refusing to give me a refund. They cancelled the flight due to having no pilots. 10 minutes before the flight.
10/10

✅ Trip Verified | I appreciate Angel Chavez so kind to us during the flight UA2391 from Chicago to New York, in July 18 2022. He helped us out of the way. His fabulous job is really appreciated. Everybody was so good, they are doing remarkable job. Our flight was late, but pilot was sharing all information to passengers about the flight. This flight was very comfortable and I will always remember how Angel Chavez helped me and my wife.
3/10

Not Verified | Pathetic people handling. My first flight was delayed from the origin, ended up late at the second airport, with all the security checks and passport verification, missed my connection flight. Their help desk denied their fault but promised to help me book another flight. I had booked a travel itinerary of 12hrs approximately from origin to destination. Due to their poor coordination and weak flight schedule, they helped me by increasing it to 17 hrs! As a cherry on the top of the cake, the made me walk between counters, them and Air Canada, until 10.30 am after landing at the second airport at 7.45 am. Also their idiotic staff boards the air plane in FIFO method (First In First Out) instead of the sensible LIFO practiced by most airlines, thereby chocking the aisle and filling up the overhead storage. Would not recommend this airline to anyone. 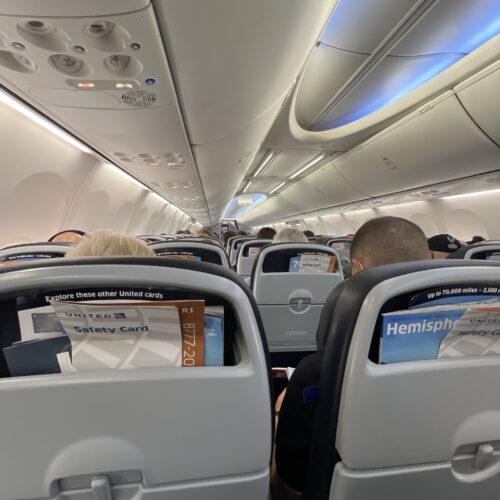 "Unbelievable mannerisms from that flight attendant"

Not Verified | One of the staff members told me to put my backpack underneath the chair which I was complying to, but she then started to rush me and even went as far as kicking my backpack that had a laptop inside. She even had an angry look on her face because she seemed annoyed with me and then with the person in front of me, when she was correcting them about putting their bags under their seat she seemed much nicer to them. I am really upset by how she kicked my bag that had electronics inside and now my laptop is a little different than before. Unbelievable mannerisms from that flight attendant.
1/10

✅ Trip Verified | Honolulu to Washington via Los Angeles. I had to find a place to write a review, which aught to provide some indication of how poorly I thought of the service. Before even boarding the flights my problems began. I have had multiple flight cancelations resulting on rebooting for both my outgoing and returning flights. What United provides complimentary is a joke. On some flights there are outlets for charging, but they were not working on mine. On no flights was there in-seat entertainment screens. Meals must be purchased if flying anything other than first class. Even flying first class doesn't provide access to lounges. Absolutely abysmal. Leg room is non existent, even when I paid to upgrade to economy plus. Between the cancelations and the lack of service benefits and extra fees, I will do everything I can to avoid flying with United in the future. Please find other options for yourself.
1/10

✅ Trip Verified | I have been recently injured in a motorcycle accident, which broke a few of my bones. My first issue is that the United personnel refused to help me lift a bag into the overhead compartment, despite my disabilities, which violates federal disability regulations. Then, a delayed flight caused a missed connection, which is not a huge deal in itself, but caused a lot of other issues. I was automatically rebooked from a first class seat (which i need due to current disabilities/ injuries) to a middle seat, so I lost the in-flight meal i was depending on for both lunch and dinner after a hectic day of issues caused by United. I also had just a few minutes to run across the Denver airport with multiple broken bones, my arm in a sling, and 2 bags because they refused to hold the 2nd plane. I was certainly not at fault for the first plane being late. This cross-airport run caused me severe pain and suffering throughout the entire flight from Denver to Newark.
5/10

"could do a better job regarding food and drinks"

Not Verified | It was an okay flight and just barely okay service. Food is terrible. The flight attendant gave me the wrong meal (out of two options) and was nowhere around by the time I realized. All the passengers were made to discard their water before boarding, but during the flight drink was offered only twice, for 11 hours flight. To get more water I had to go to the flight attendants. They could do a better job regarding food and drinks.
1/10

"The staff were just chatting and laughing with each other"

✅ Trip Verified | Horrible! Slow to board passengers. Then sat in the plane at the gate before taxi out for an entire hour past take off time. Then sat on the runway for another 20 minutes only to be told there was a problem and had to go back to the gate. The employees of United seemed to take all of this in stride, don’t seem to care that we are well over an hour behind schedule and people are missing connections. The staff were just chatting and laughing with each other and don’t care at all about the situation or passengers. This all seems common place for them.
41 to 50 of 4201 Reviews