✅ Trip Verified | Bangkok to Cairo via Muscat with Oman Air. Very good service and departed on time every time. Very good food. Staff were good. On the other hand, it was hard to find the check-in kiosk at Bangkok Airport. Price was a bit high.
9/10

"I was very impressed"

✅ Trip Verified | Just flew Oman Air Business class from Casablanca to Kuala Lumpur via Muscat and I was very impressed. Everything went absolutely smoothly, no delay, nothing ! Had a 13 hours transit lay-over in MCT and was offered a hotel room but prefered to stay in the wonderful lounge; the attendants mostly Filipinos were extremely courteous and service friendly and even recognized me on my return flight and the place is so clean ! Great flights with very comfortable and private seating; appreciated the old style Biz class on their A330 on the MCT-KUL route, not so private as on the 787 but very confy. Great choice and variety of food and drinks, the best soups I had ever had on a plane. Very friendly attendants. It was definitely a bargain and will try to repeat the experience in the very near future! Thank you Oman Air. 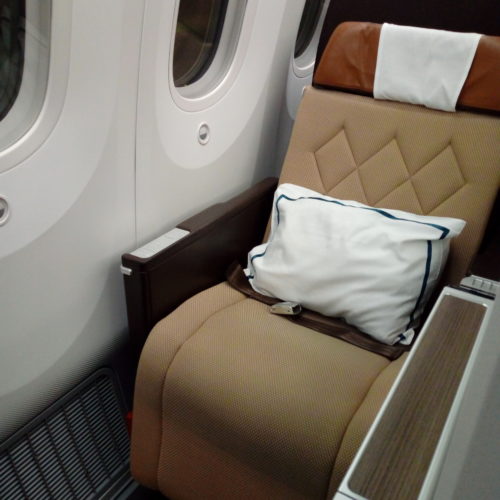 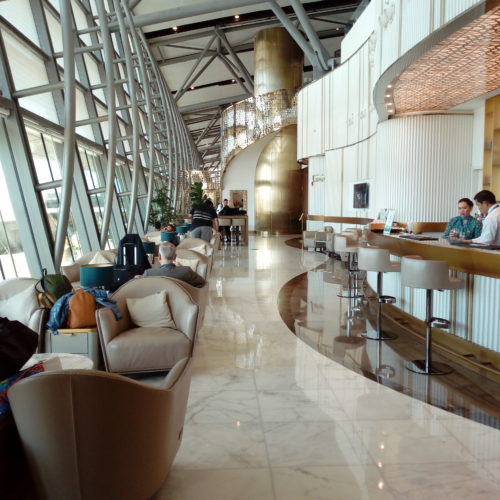 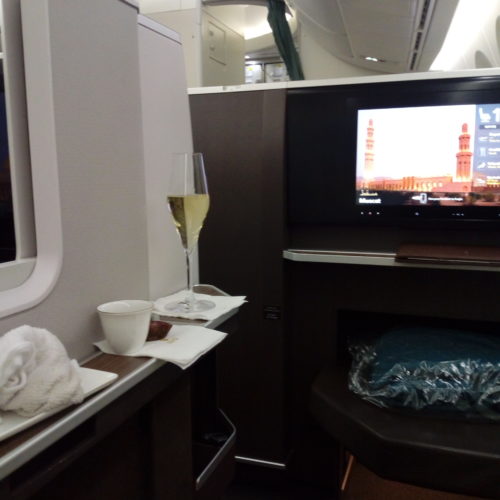 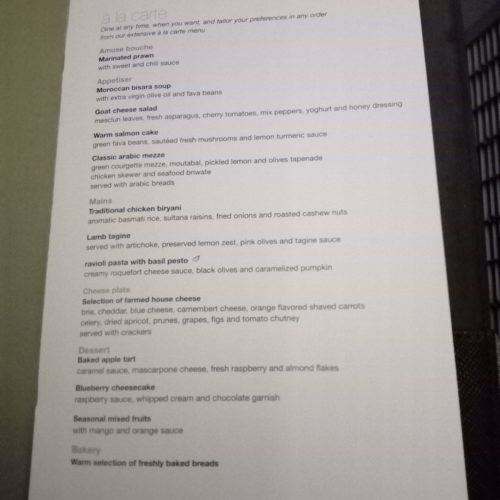 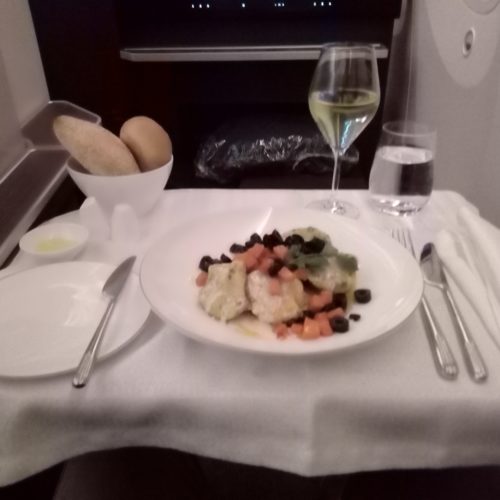 ✅ Trip Verified | Casablanca to Kuala Lumpur via Muscat. One of the worst airlines on the planet! Unreliable! They cancelled our flight and delayed it 2 days, no apology no nothing, they didn't even inform us, we had to check to see the change! Very bad service, it's nearly impossible to contact them, and when you do, they are extremely unprofessional, they can't help with anything but waste your time on the phone. The flight experience is very basic! All on all I don't recommend! Their prices are not that different from similar airlines like Qatar or Etihad so it's better to fly with them! You have to pay for WiFi! Even some budget airlines have free WiFi!
9/10

✅ Trip Verified | Bangkok to Cairo via Muscat with Oman Air. Very good service and departed on time every time. Very good food. Staffs were good. On the other hand, it was hard to find out check-in kiosk at Bangkok airport. Price was a bit high. 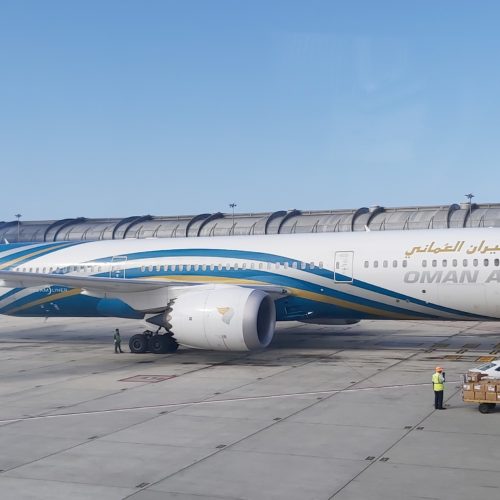 ✅ Trip Verified | Appalling treatment following cancelled flights and no customer service response. We travelled from London to Colombo over the Christmas period. We booked our tickets earlier in the year and paid a premium to fly back on Saturday 4 January and ensured the flights had one short stopover as we were travelling with 2 small children and 2 elderly grandparents. Oman cancelled part of our flight on the way over and put us on a 2 stopover flight which added an extra 6 hour delay to arrival time and inconvenience at the additional stopover in the Maldives. Oman cancelled the entire return journey on 4 January and the next available flight provided was on 7 January but did not inform us that was a 2 stopover flight! Despite paying a premium for a Saturday one stop flight and getting transferred onto a Tuesday 2 stop flight, no compensation has been accepted. The complaints service are non responsive and simply do no respond to a complaint. We will never be flying with Oman again!
4/10

"bags a week after my arrival"

✅ Trip Verified | Melbourne to Tehran via Muscat/Abu Dhabi. I received my bags a week after my arrival in Tehran because they engaged another airline (Etihad) to do the first part of the journey, my bags were held in Abu Dhabi the staff in Tehran were rude and unhelpful trying to avoid accepting the responsibility. I think this company is far from being an international professional airline, they are known for missing bags. The second issue was the extremely expensive cost of rebooking a flight once you miss one flight it cost me $1300 Australian dollars to rebook my flight from Abu Dhabi to Melbourne
8/10

"Service was pleasant throughout"

✅ Trip Verified | Hyderabad to Muscat. Check in was simple, lounge pass was pre-prepared and staff was assigned to escort me through security. She told me she would return later to collect me at the lounge. Lounge at Hyderabad is common to all airlines and a pretty uninspiring place but on this occasion a young man was extremely attentive, serving me all I could ask for at my seat. I was among the last to board and was pleased that despite the full economy cabin the business class storage had not been encroached. On the 737-900 seating was 2+2 in a 12 seater cabin that was half full. We pushed back 3 minutes early and between then and the point of take off I was offered a hot or cold towel, a choice of lemon or melon juice (alcohol is not served on the ground in India), an Arabic coffee and fresh dates. Once in the air a menu was quickly presented. Slightly disappointing unless you happen to be a passionate fan of Hyderabadi food which the majority of passengers were and only one starter and dessert (see menu card). From the three mains I opted for the fish but requested it after one hour of the three hour journey. The menu listed only soft drinks but after I clarified a bar was available, I requested a gin (brand not evident) and tonic (served with no lemon or lime and little ice). This came with a small half full bowl of nuts that seemed flavoured with salt and vinegar. Before dinner I enquired about the wine selection. Two uninspiring mini bottles of red and white that I have had on economy in the past in other routes were offered, so I asked about Champaign and took this option. When it was poured out of my sight a stewardess came to apologise it was not chilled and offered ice - an unlikely combination. I was assured a second bottle was being chilled and this later transpired to be so. Dinner comprised a simple salad without dressing and fish which was cooked perfectly but came with accompaniments that were not hugely to my taste, and an Indian desert which, as is usually so, too sweet for my liking. Service was pleasant throughout and the IFE, criticised in some reviews as lacking choice, more than met my expectation. 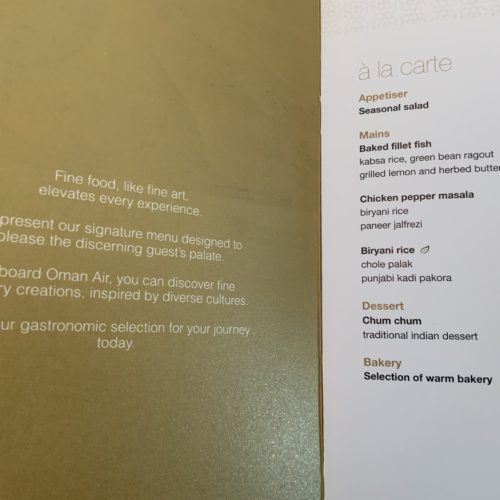 "2nd time my luggage is delayd"

✅ Trip Verified | Bahrain to Kuala Lumpur via Muscat, this is the 2nd time my luggage is delayed, really causing a lot of lost time. Overall the flight is good, but the connection is very tight, no much for passenger to choose.
10/10

✅ Trip Verified | Casablanca to Muscat. I was impressed with everything about Oman Air. This was our third flight after our two legs going to Europe and this the first returning home to Australia. The service was excellent on all legs and the food was some of the best airline food I have had. The business class seat is all you could want and I managed 5 hours sleep. There was a great selection of wine and other beverages.
7/10

✅ Trip Verified | Manchester to Colombo via Muscat. I was not impressed with the on-line checkin experience. I was given error messages suggesting I try later, and this was the only advice given when I telephoned them. Eventually I tried with Chrome instead of Firefox and everything worked: however, you cannot check in online unless you choose and pay for a seat (and if you are willing to pay to reserve a seat you can do that as soon as you have bought your ticket). So I checked in at a desk at the airport: I was not asked to pay anything but was not given a choice of seat. (I was given a window seat for the first sector; an aisle seat for the second leg, but both of these were towards the rear of the aircraft.) The lounge provided for premium class passengers at Manchester is only the Aspire lounge, which is OK but pretty basic. Food for the Manchester to Muscat sector was generous and acceptable (apart from a horrible sausage roll for breakfast!), but somewhat lacking in flavour. Service was incredibly slow: I think I began eating my supper at around 11 at night (departure time scheduled for 20.05). One poor woman was desperate for the toilet but the food trolley would not let her get past for a prolonged period. On the Muscat to Colombo sector we were served a spicy and delicious fish curry, but the woman next to me could not tolerate the spices and there was no alternative (we were near the rear and all the vegetarian lunches had been given out already). The real star was the infight entertainment: a broad selection of intelligent films from Europe; Iran and other cultures, many of which were recent releases. There were also TV series and Hollywood or Bollywood rubbish for those so inclined, as well as a wide range of interesting music. (Unfortunately the listening conditions with the roar of the engines made musical appreciation impossible, even using my own noise-cancelling headphones. The earphones provided in economy were of good quality but obviously not noise-cancelling.) Oh: the coffee was very sad. Maybe it is time that some Middle Eastern airlines shared this aspect of their culture with all their passengers. My seat on the Boeing 787 was comfortable, with just enough space. On the 737 I was rather cramped, even in an aisle seat (and I am not particularly large).
1 to 10 of 389 Reviews