✅ Trip Verified | Worst airline I have ever flown with. They made me, my fiancée and 9 year old fly from London to Zurich knowing that we would have missed our connecting flights and that there were no others to Brazil the next day. We tried speaking to everyone, including over the phone only to be told that it couldn’t be sorted in the UK. No flights were arranged when we arrived in Zurich and we were put in a hotel and told to share a double bed! Nobody called us to advise and I accidentally found out we had been put in a flight by logging on the APP. After calling twice and being told I was not on that flight but on one later in the day (which did not exist) the advisor said I should go to the airport to ask there as he was not sure. Indeed we were going via Milan and I almost missed it because of their incompetence. We had no bags as we were told it was safer for them to keep them. After 3 different employees checking the bags were on the flight to Milan and following to Brazil, we arrived without them. They arrived 38 hours later. No compensation given and I was told by them they are not liable. Terrible service. Tight flight. Food not great. Worth paying more and flying with another airline.
1/10

✅ Trip Verified | I called up for an upgrade to business class and was hung up on about 6 times, when I was finally able to reach someone, I was put on hold and then hung up on about 3 more times when finally I reached someone they told me that an upgrade was not possible even though I was willing to pay. I then asked for a seat reservation as I was unable to do it online as it was blocked for some reason, their website is a mess, I was hung up on another 2 times until I again was able to call and reach some who was able to reserve the seats with extra leg room in economy, I asked to be to the front of the plane as possible and they did the reservation for me and they charged my card more by $75 dollars than what was stated on their disaster of a website. I asked them to send me the new seat reservation and questioned them on why they charged me more than what was stated they said this is the way it is, and they refused to send me the new seat assignment on email saying they can only say it on the phone, what a mess, I must have spent two days on this story. I then called again to ask about how much an extra bag would be and they told me $120 dollars and I said no I will think about it and the next day I find a charge for $170 dollars on my credit card, what a scam of a company and I called again and was hung up on another 3 times until again I was able to reach someone and they said that if I cancel all is non refundable. I gave up and I can tell you I will never ever in my life use Swiss Air or Expedia both are disgusting and have zero notion on Customer Excellence. I do not recommend anyone to use both companies they are a disaster!
5/10

✅ Trip Verified | Very run down and outdated Business Class. Board personell actively hid from passengers to avoid requests or questions. Every single order I placed came back widely incorrect but instead of just fixing it, the stewardess decided to blame me for the error. The catering from DEL is a major disaster. 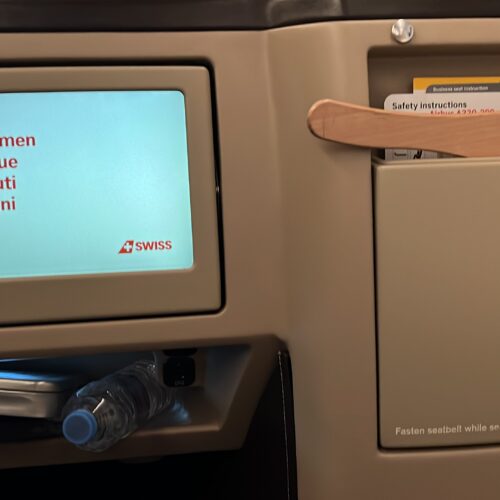 "no better than any low cost flight"

✅ Trip Verified | Flight lx 256 from Zurich to Tel Aviv. The plane is very old. Thin and uncomfortable seats. The food was horrible and it would be better if it wasn't served at all. A flight no better than any low cost flight. A big disappointment from a company with a good name without a decent value for the price of the ticket.
1/10

"seats were shifted on the day of boarding"

Not Verified | I would not recommend anyone to take this unless you have 0 options. I wanted to change my return ticket from Zurich and they forfeited my air ticket instead. I called to demand a refund since it’s their own system error and I shouldn’t be paying for it. They replied that there’s nothing they can do about the system Nor the refund at all. I called 3 different times and all 3 agents gave me mixed answers about my ticket status. Not only, I was told to send an email to rectify only to be five. A wrong email. So you’ll be spending time to dig the correct email. When I finally got there, they didn’t respond but attached a totally different booking reference to it. It’s as if you’re talking to the wall. I thought that’s the end of my drama to find out that my seats were shifted on the day of boarding. I think this is one of the worst airline ever.
1/10

"I had terrible experience"

✅ Trip Verified | I had terrible experience with my flight from Valencia to Zagreb. At first Swiss sent me SMS when I was already on my way to airport, offering me to move flight as they overbooked. I did not opted for this as my family already waited for me for planned family trip. First they denied me check in at the airport and then they sent me to Swiss office where they issued me ticket for flight 6 hours later. No voucher of any kind offered and then when I contacted them, after one month they said that basically everything was my own fault (!) and that they are not willing to compensate me. I would never ever recommend such terrible service to anyone.
1/10

"not the Swiss Air I used to know"

Not Verified | A trip to hell. From the crew to the ground staff very contemptuous in dealing with the traveler. The ground staff in Buenos Aires did not even speak English. Horrible food, the plane with broken seat upholstery. My seat was broken (it would not recline) and the cabin crew refused to give me another seat. The little time I was able to sleep I was constantly bothered by staff who kept hitting me as she passed. This is not the Swiss Air I used to know.
8/10

Not Verified | I was surprised by the quality of the service on this flight. London City usually means cramped aircraft and limited service, but this was fully in line with flights into Heathrow. The service was attentive, the seat was comfortable and there was a decent choice of drinks, including Champagne.
3/10

"This to me was the final straw"

✅ Trip Verified | I was denied boarding because the flight was overbooked. This to me was the final straw. I use the airline often to travel and I was not very happy with the services especially for long haul flights however today the services were below acceptable. We were offered the minimum compensation and the inconvenience is just too much. Never again. I truly believe that Swiss is probably the worst European airline that is not low budget.
10/10

"It was a nice experience"

Not Verified | Very nice! I want to thank to the company for a such good service. We travelled from Oslo to Milan, tur-retour, in both cases with stop in Zurich. We bought tickets from ticket.no (not right from Swiss). We didn't chose the seats, but the company gave us seats to be together. We could take care about our child together. We got water and chocolate and our child got toys (they tried also to give to him sweets but we refused). The plane was clean and the staff showed us respect. In Milan we had to wait like 5min close to the plane to get our baby trolley. The shuttle bus was waiting for us. The crew got out from the plane and they tried to help to find it. They felt frustrated because we had to wait so much (and the bus full with passengers was waiting for us) and they apologized. Back in Oslo, I found out that my luggage got a little damage. In the airport, I spoke with them from customer service (baggage service) and they apologized and gave me the chance to chose (from a website) a new suitcase for free. In my opinion, their focus is on the customer. It was a nice experience and for sure we will travel again with them.
1 to 10 of 929 Reviews