"Absolute shambles from start to finish"

Not Verified | Absolute shambles from start to finish. Dreadful experience at Manchester Airport. Staff were rude. Check in staff checked all of our bags under one travellers names, which has caused complications. One bag did not arrive at Orlando. Subsequently tried to get help from Aer Lingus, which is non existent. Case reported as missing but no updates provided. Call centre staff don't understand when you phone them. No one replies to e-mails. The plane itself was scruffy.
1/10

"Nobody is there to support"

Not Verified | Frankfurt to Dublin. I lost my luggage, I travelled on July 6th 22. Till now I have not received it. Very bad experience with Aer Lingus. Nobody is there to support.
1/10

✅ Trip Verified | I received an email several hours before the flight saying the flight would be delayed an that if I had a connecting flight before a certain time, to call the airline for rescheduling. After 15 minutes on hold I was told to come to the airport and they would assess the situation at that time. Upon arrival at the airport, I was told that there was no way I could make my connecting flight. After considerable research, they told me the best way to get to my Paris that day would be to go to London and take the train to Paris, I would then submit the train and any related expenses for reimbursement, Well I submitted the expenses 7 weeks ago and have not had a formal response, I call customer service repeatedly, usually with 30 minute hold times, and am consistently told to wait as there are a long line of claims ahead of me. I am never given any way to escalate the issue or any idea of when the case will actually be heard. I opened a case with small claims court this week. The issue of the missed connection is understandable. I perhaps should have avoided that, or at least picked one with more room for error. But the problems with customer service, both at the airport and in the claims handling, are unforgiveable. Aer Lingus used to be a premier airline back in the day. Now they are a poorly run budget airline. Avoid at all costs!
1/10

✅ Trip Verified | I flew with Aer Lingus with 2 different flights. Both flights were an hour delayed, but that happens. However my baggage was lost on 6/12 going from LHR to DUB (it is now 7/28) and I have still not received it nor heard back from a single employee even though I’ve left many messages. Not only was my luggage lost but I was treated very poorly by the baggage claim staff at the DUB airport. I asked questions on the process of getting my bag back and the employee responded “this is what’s wrong and annoying with Americans, they always want to control things and are always so mad about their missing luggage” Obviously anyone who’s luggage goes missing wants it back? Basically this man brought me to tears and couldn’t care less about how rude he was being and denied my request to personally pick up my luggage, where if he let me, I'd have my luggage by now. It’s been 6.5 weeks.
1/10

Not Verified | Aer Lingus cancelled my original flight on Sunday, which included a layover of 1.75 hours at Dublin from London. They booked us on a replacement flight for 16.40 on July 26. They clearly rented a budget airline’s plane. It’s extremely sub standard compared to the ones normally used for this flight. Obviously need to catch up from stranding customers from Sunday so they’re piling everyone on top of each other. The usual configuration for this flight has 31 inches of legroom. In these seats my 5’9” slim frame barely fits. I did not pay $1,100 per seat (7 of us) for this. Boarding process was another piece of utter chaos. Almost no announcements to tell us they couldn’t work out how to open a couple of doors. I was expecting flight entertainment in the seat back but there isn’t any. No Wi-Fi either.
1/10

"this airline is not worth the frustration"

✅ Trip Verified | After having to cancel our trip due to Covid, we are finally going this year. Because I had a voucher from AerLingus I had to call to arrange my flight. It was a nightmare. It took at least 4 phone calls (Avg wait time was 60 min) to finally get it scheduled. On one memorable phone call, after waiting an hour to speak to someone, the Rep hung up on me. Now that the day has arrived, when I try to check-in online (because they didn’t give me a seat assignment), the website said I can’t check in until 7/28 - which is two days after my flight leaves. During an online chat with Support (another 45 min wait), the rep said “that’s when you can check in, sorry for the inconvenience” and the disconnected from the chat. Trust me, this airline is not worth the frustration, pay a little more if you have to, choose another airline 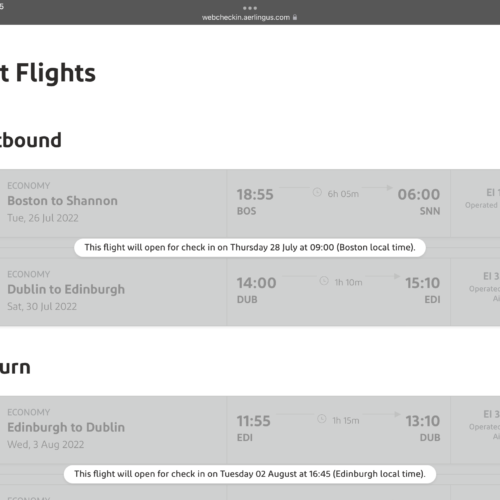 "no free alcohol on board"

Not Verified | Probably the worst airline in Europe. JFK to Dublin was uneventful, the food was lackluster but edible, and the IFE worked well. Dublin to Vienna and back was no frills. Dublin to JFK was a nightmare: The flight was 2.5 hours late. The food was disgusting, no free alcohol on board, not even beer/wine. Only 1 six-ounce soda per passenger, no refills, not even water. No TVs on a 7 hour transatlantic flight. The seats were tiny (9 abreast instead of the usual 8), and rock hard. And the broke a wheel off my luggage. I will never fly EI again.
2/10

Not Verified | Terrible flightS with Aer Lingus. Traveling from Lyon to Dublin : 2 flights canceled on short notice (20h) two days in a row. Coming back to France, flight canceled (on short notice 24h) and postponed 2 days later. I had paid for direct flights but was forced to do a layover in Nantes. Not a big deal for me, but arriving in Nantes from Dublin on my way back home, Aer Lingus had not purchased the 2nd ticket. I had to call them (in Ireland) to make them buy the ticket. I made a complaint on their website, to receive a compensation for the 2 hotel nights I had to pay + food. They said I'd get an answer within 14 business days. 30 days later I'm still waiting. Called the Customer Service, and they laughed at me for expecting quick answers!
9/10

"One of the very best transatlantic experiences"

Not Verified | One of the very best transatlantic experiences I have had in many years of travel. The staff, on the ground and in the air, were pleasant, efficient and courteous. We were met at Dublin airport after the overnight flight, escorted to our new gate, and politely told when we needed to return to board our connection (ninety minutes). We were also told where we could find a bureau de change. The clincher was that about three hours into the Toronto to Dublin leg, the young couple just ahead of us had to deal with a new and very upset baby; nothing seemed to work. Along came a senior lady staff member who took up the baby (obviously much experienced!) and within a minute the baby was quiet (and reluctant to be given back). In May 2023 we shall take Aer Lingus again to Dublin and back from Gatwick, with much pleasure. It is our Number One airline for Europe.
1/10

"I'll stick to Ryanair in future"

Not Verified | 2 months ago we decided to go to Lanzarote and we decided to pay extra to choose Aer Lingus and also extra for the early flight, got an email 24 hours ago saying the flight is rescheduled by 7 hours and just 10 minutes ago another e-mail saying Privilege airlines are taking over our flight. Obviously decided to read reviews online and they're shocking. They have 4 aging airplanes to boot too. I'll stick to Ryanair in future.
1 to 10 of 867 Reviews