"too many business class seats"

Not Verified | A350 from Melbourne to Singapore was in regional configuration and unsuitable for a nearly 8 hour flight. My seat was hard and there are too many in the business class section. Food served to me was in microscopic proportions and there was no drink on boarding. I waited 90 mins for first refreshment. A380 upper deck has many business class seats, some of the windows are obscured, my seat was rock hard though it was bigger and with more storage than previous flight. Long delay to my getting refreshments. Long delay to serving food. I got the impression that there are too many business class seats on the A380 for good service to be possible. In transit at Changi the Krisflyer lounge was packed with nowhere to sit and overheated.
2/10

"no inflight entertainment or even music"

✅ Trip Verified | Singapore to Male, no inflight entertainment or even music. No towels, no appetiser and no choice of meal. Coffee/tea was not offered to me. After takeoff 1 toilet was locked for the entire flight until before landing. That usable toilet was filthy after an hour. When booking this route there are 2 flights a day both the same price but the night flight is operated by the A350 which has inflight entertainment. The day flight i took did not. Why the difference when the ticket price is the same? The website should prompt the user that this flight has no entertainment. No smiles no friendliness. Whatever happened to the Singapore Girl and A Great Way To Fly?
9/10

"Meal was excellent by any standard"

✅ Trip Verified | First time on SQ business for a very long time so we were excited to see what it was like especially during COVID. Compared to the Qatar the hard product is not as good especially the Q suite. The book the cook worked well with course by course service with the chicken satay as amuse bush. Meal was excellent by any standard as was the service. Where they went above and beyond was when my 2 year old son was feeling unwell, they assisted more than I would ever have hoped for. Flight was a bit more turbulent than normal due to the different route to avoid Russia and the Ukraine. The flight landed late due to a headwind. Luggage was out by the time we cleared immigration. Only downside was the lack of a touchscreen and selection of shows was not as good as I remembered.
6/10

"happy with a Continental breakfast"

✅ Trip Verified | I flew from Bangkok to Melbourne via Singapore. Singapore to Melbourne flight, SQ237. Seated in 63H, towards the back. The flight was full, the first day the Australian border was open. The boarding procedure at Changi Airport Terminal 3. Users of Changi will know the security for flights at Changi is typically at the individual Departure Gate. Unlike at other airports where it tends to be before entering the Terminal. At Terminal 3 they've decided to do all the security for 4 gates, you are then in this little pig pen with 3 other flights, potentially 1500 people, it's not big enough. The lines for the different flights cross each other, and there is little by way of organisation. No one seemed to be in charge, when I politely mentioned it didn't seem very organised I was met with a blank stare. I didn't expect this at Changi Airport. A cheerful and informative crew, attentive to people's needs, even in Economy. The plane interior is pleasant, it was clean. The inflight entertainment was all right. OK, the food. Flight was at 00:30 hours, so there was no dinner, shortly after takeoff we went to lights out, with breakfast to be served 3 hours out of Melbourne. Meanwhile the hostesses came round on a regular basis with glasses of water. Breakfast arrived, lightly cooked sausages, scrambled egg, beans, and some nasty pasta tomato sauce, that smells of capsicum. The egg seemed to consist of only yoke, a small spoonful was enough to confirm it wasn't fit for consumption. I'm a keen airline food eater, I enjoy the tray format, and I'm not too fussy, but this was inedible. I complained and asked for the alternative, vermicelli noodles with some stir fried chicken. It wasn't great, too much vermicelli and not enough sauce, but it was adequate. An hour or so later, a senior hostess came and chatted with me, and asked me what was wrong, I described the egg, she said someone else had also complained, I thanked her for asking me. I had an extremely good Nasi Lemak going up to Bangkok from Singapore on January 8th with Scoot, so the Changi kitchens can produce good food, and needless to say Singapore is famous for its food. Please SQ, don't serve food which doesn't pass muster. At 5am Singapore Time most of us would be quite happy with a Continental breakfast. A roll, a croissant, jam and butter, a bit of pineapple, a yoghurt. Early days, we are all finding our feet. Like a lot of SQ travellers I am fond of the airline, and look forward to them hitting their stride soon.t 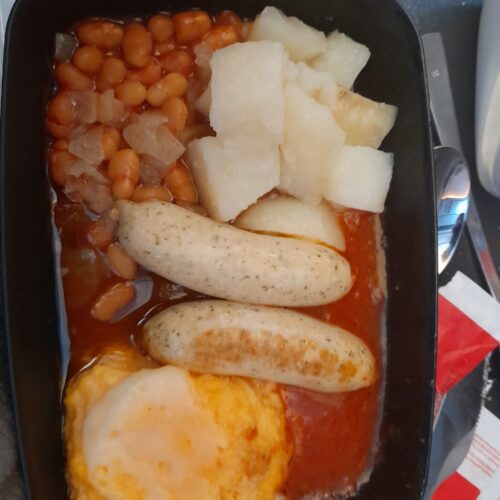 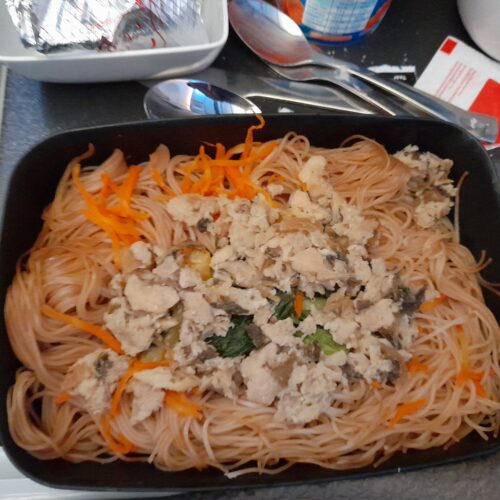 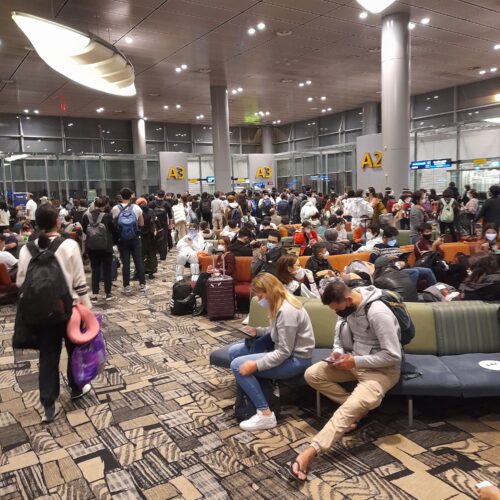 "No salad or cheese"

✅ Trip Verified | The check in was excellent given the fact it was during the pandemic. Took off on time. The movies need to be updated more frequently. My food was a let down and portions are very small. From Singapore to Sydney ( 8+ hours) we were given one meal which included a rice noodles with seafood, ice cream and a bread roll. No salad or cheese and crackers. No pre arrival meal was given. No hot towels on both flights and my wifi never worked. However the staff were very polite and courteous.
1/10

"trying to get in touch with Singapore Airlines"

✅ Trip Verified | I booked to go to Thailand on the 16/12/21 From Manchester but my wife had a positive covid test so we couldn't fly. I have been trying to get in touch with Singapore Airlines but I am just being ignored. Tried phoning the help line but gave up after 1 3/4 hours. I booked directly with the airline in case something like this happened but it hasn't made any difference.
3/10

"all they would refund were the taxes"

✅ Trip Verified | We flew coach class from SFO to Bangkok in November 2021. We found that Singapore Airlines was not the airline of old. It used to be the best airline in Asia. No more. The seating was cramped, not on par with other competitor airlines such as ANA, and certainly no better than EVA or Cathay Pacific. They canceled our connecting flight on their subsidiary airline, Scoot, booked through Singapore Air, from Phuket to Singapore on the return leg. We were notified by email just 16 days before the scheduled flight. We were informed that we had to now fly out of Bangkok to Singapore, not Phuket, and we had to re-book through Singapore Air, not Scoot, and had to telephone a customer service agent to do so. This meant a total revision of our itinerary and losing the non-refundable tickets we had already purchased for flights in Thailand. We spent a total of 4 hours on hold attempting, without success, to reach an agent. We called both the Bangkok and Singapore offices to no avail. We even had a travel agent call for us on the agent's line. She gave up after 1/2 hour on hold. We tried email. They told us they would get back to us in 7-14 days. We had gone to both the Phuket and Bangkok airport Singapore Air offices but both were closed. We gave up and flew ANA home. They answer their phones. When we returned we found that all they would refund were the taxes. Sent a letter by post to the corporate headquarters. One month later no response, not even an acknowledgment of receipt.
3/10

"seats are a step back in quality"

✅ Trip Verified | I've got to say that my experience flying Melbourne – Singapore and Singapore – Melbourne have completely turned me off Singapore Airlines. Their new fit outs of their A350s have reduced the seat pitch and the seats are a step back in quality. The cushioning is very thin and hard which is uncomfortable and the seats themselves are poorly constructed. The seat in front of me would buckle and bend every time the average size person in it moved which meant my knees copped a pounding given they were crammed up against the seat because of the reduction in space. These new seats negate SIA from being a feasible selection as an airline for me. Thankfully the plane from Singapore to Manchester had not suffered the same upgrade and was a reminder of how bad the Melbourne – Singapore update is. The meals were also underwhelming compared to pre-pandemic with very basic options and accompaniments. It took them 3 hours after take off to provide food and remove the trays due to having only one trolley cart servicing each aisle in the economy cabin. The whole experience very much smacked of an airline that has been taken over by bean-counters and they are cutting costs at every turn possible with cramming more people on the plane and providing less food and staff, and ultimately an experience that is a shade of SIA's glory days pre-pandemic. 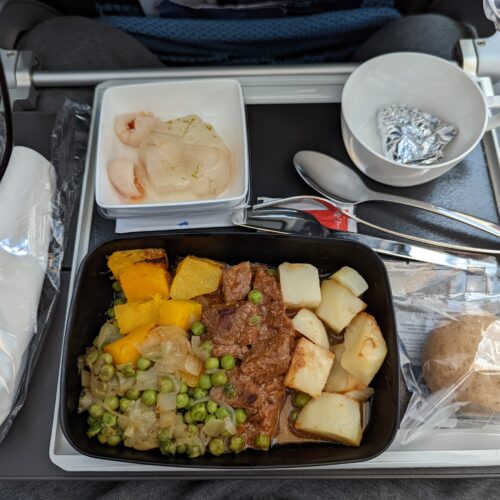 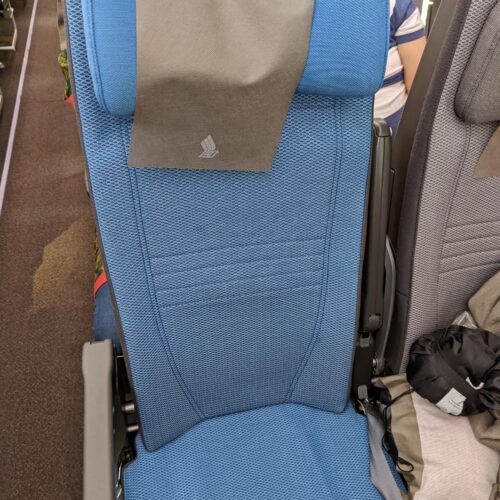 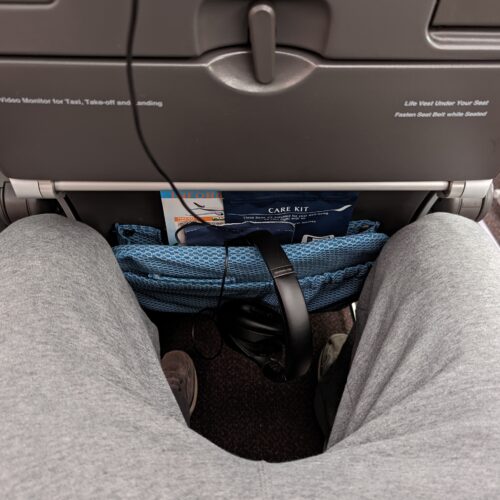 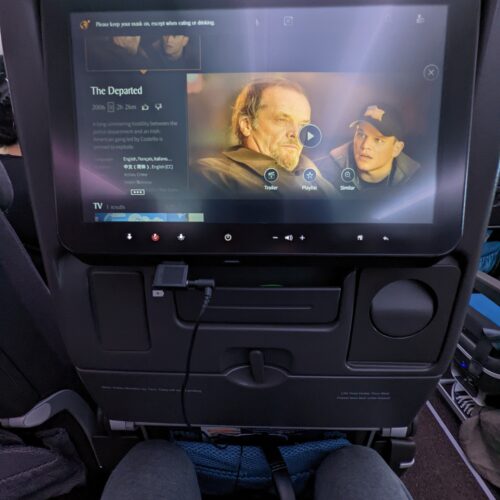 "Only 1 meal was served on the flight"

Not Verified | Quality of food and beverage has dropped off significantly compared to usual business class offering. Only 1 meal was served on the flight and we were asked to choose whether to have it as dinner upon departure or breakfast prior to arrival. The meal was very average. In the morning they didn't even have yoghurt or cereal to offer to the kids. Both children, age 3 and 5, were in BC also. Very disappointing for an airline of such calibre.
4/10

"the food was an utter disaster"

✅ Trip Verified | Trying to contact them by the call center is a nightmare with a lack of customer service and inefficient. The seats on this aircraft were the new regional business class seats which are not bad. The IFE is also good and we had 100MB free wifi which was nice. The crew were good. However, the food was an utter disaster. For a 7 hour flight, we were given 1 miserable meal which was rubbery eggs and mashed-up vegetables. Book the cook was not functioning on this sector so we had no other choice. No welcome drink either. Standards have gone down drastically from many aspects.
21 to 30 of 1321 Reviews