"offer me the Business Class entrée"

✅ Trip Verified | SQ171 DAD-SIN. Terrible flight. Boarding started late and was chaos, with no real explanation about the delay. Upon boarding could not use the overhead above my seat, and was not allowed to have any personal items. There was a Headphone shortage. Took off, and inflight service started rather late. Cabin attendants speaking extremely fast, and I was unable to comprehend what they were saying. Multiple times, Had to ask them to slow down. They ran out of food. Offered Entrée was disgusting, and I refused. They came back, and tried to offer me the Business Class entrée, but there was only 1 choice. I passed, but they hounded me with endless questions. Landed, and couldn’t get access to my luggage. Singapore Airlines is only good on Ultra Long Haul flights. With Asian connections not anymore, since they got rid of the A330.
10/10

✅ Trip Verified | Boarding was prompt and the flight landed early. Very hard-working cabin crew. They tried their best to fulfil requests. They were less proactive with coming around with drinks during the flight compared to my previous flights, but responded to individual requests made to them directly. The aircraft was very clean but cupholder on my seat was broken. Overall I feel comfortable flying with this airline and would choose to do so again, knowing I will get a certain standard of service.
10/10

"lived up to high expectations"

✅ Trip Verified | My first flight post-pandemic and Singapore Airlines lived up to high expectations. The cabin crew were excellent and made regular drinks runs throughout the flight with trays of water, juice and sometimes beer. I was impressed by their professionalism, politeness and friendliness throughout the journey, despite having to serve almost a full flight. Flood (including snacks in between meals at the galley) was plentiful, even for economy class. Two free hours of wifi for economy class passengers was a welcome addition to the service. Everything went smoothly, from boarding to disembarking. Prior to the flight I had called the call centre to make a booking amendment and the service from the call centre was also efficient.
9/10

✅ Trip Verified | Singapore Airlines ranged from excellent to good. Syd-Sin-Cph (Oct 6, 2022) was excellent. Of course in Economy we were packed like sardines, but the tin was large enough (and neighbours small enough) that we weren't particularly uncomfortable. This is the third time we've flown post-Covid. The first time on Thai it seemed that Covid was the excuse to give no service at all but Singapore Airlines both at Xmas 2021 and last month provides excellent service. Food was very good and alcohol plentiful. The entertainment system provided enough to occupy us for this long haul. Flight attendants were very attentive. We stopped over in Singapore on our way home. Unfortunately Sin-Syd leaves shortly after midnight. The flight was delayed and it was after 1am before we left. This is a long time between meals and we were uncertain whether we'd be given a snack and night cap before going to sleep but no announcement was made and we stayed in limbo between sleeping and waking for most of this leg. Of the four legs of our journey this is our only complaint.
10/10

✅ Trip Verified | SQ23 in Premium Economy Solo Seat. 1730 Arrived at The counter. Instantly was approached, and greeted by a extremely professional gentleman, Asking which flight I was on. When I told him SQ23, he asked “could you please wait?”. Well I went to get water, came back, and instantly he reengaged me, stating the counter was ready for me, and took me straight to the head of the line. Check in fast, with agent verifying information. Boarding was quick. Upon boarding a Red Uniformed Cabin Attendant welcomed me aboard, and directed me to my seat. As I passed others they acknowledged me and welcomed me aboard. One even said “Happy Thanksgiving”. Aircraft seemed extremely cold, and rather uncomfortable. We seemed to be late pushing back, and The Red Uniformed staff was going around talking to passengers. She approached me, and began to engage in conversation. She thanked me for flying SQ for 14 years. Finally we Took off. I had to use the provided blanket. Champagne is back on the menu. When they arrived with Dinner, they ran out of food, so the Steward said he had to go to Business to get entrees. He came back and said what he had. I ordered the Beef. He kept checking in, with estimated time of completion. Constant Champagne rounds followed through the flight. After dinner I slept. Standalone seat extremely comfortable, and excellent value. Second meal came out. I had the Stir Fry Shrimp which was Delicious. Constant Champagne refills continued. On approach to Changi, I switched to Coffee, which also continued with multiple rounds. Arriving in SIN on Thanksgiving morning, crew wished us well as we debarked. I have been flying with Singapore Airlines since 2008. This flight maybe the best experience I have ever had with them!!! 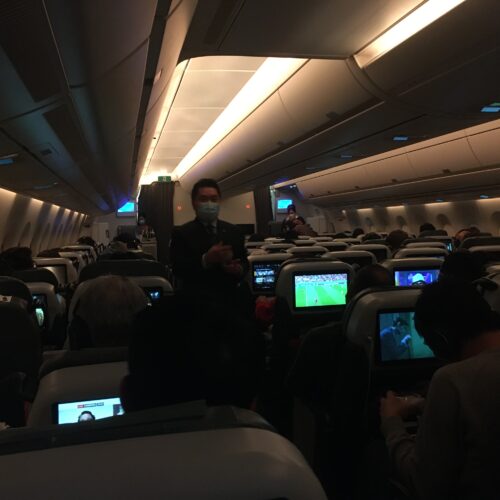 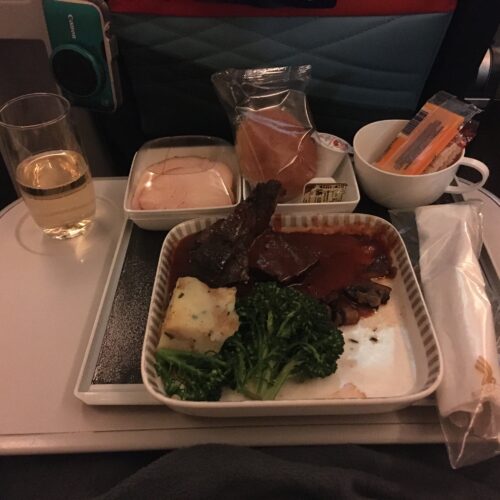 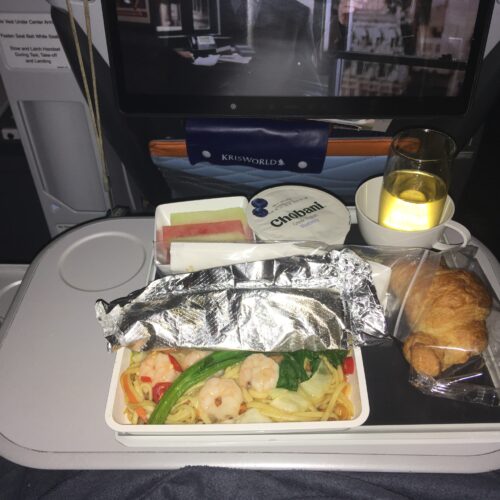 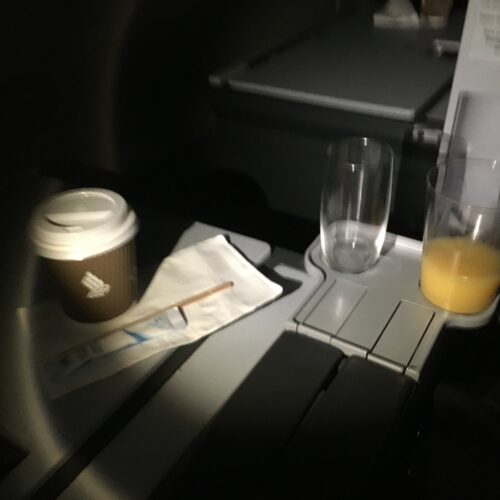 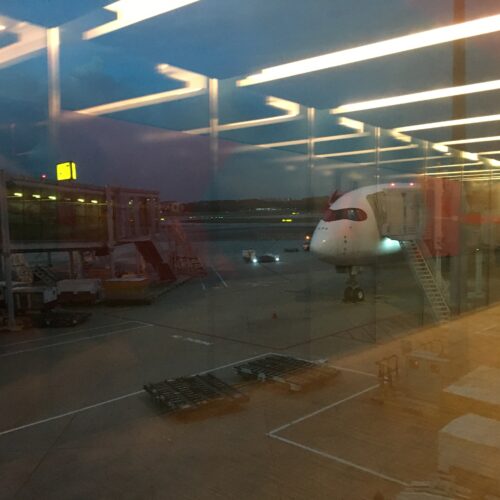 ✅ Trip Verified | I'm a vegetarian, the food was tasty but I have some thoughts: a bun served with butter without any addition in one of the main meals? I had to ask for a drink because the service walked by multiple times ignoring me. I flew with them 4 times, two flights of 14.5 hours plus 2 shorter flights on 1 out of 4 flights, I can say that the service was at a high level. The seats were super uncomfortable. The number of drinks served for 14.5 hours is really poor. The last drink I asked for was water, and the staff brought me a tap water. 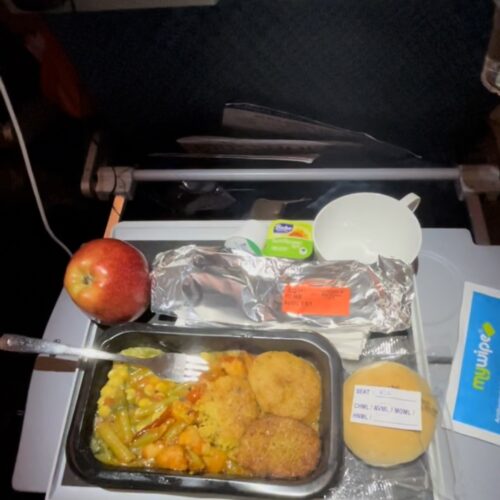 "the cabin crew were excellent"

✅ Trip Verified | Late evening check in was surprisingly busy, but with all counters open there was not much delay. Similarly the lounge was busy. There was a decent selection of food, but the wine on offer was disappointing. Boarding was prompt with a friendly welcome, and champagne and fruit juice on offer before take off. Drinks were served immediately after take off, and it seemed that most passengers opted for sleep rather than food. The seats are very comfortable for sitting and relaxing, but in the lie flat position the recess for the feet is restricting. There were four breakfast type food options available, to be served immediately or before landing, which made a lot of sense, but the Continental breakfast was very basic and disappointing. Brisbane airport was very quiet early morning, and immigration and luggage delivery very quick. Overall it was a good flight, and the cabin crew were excellent, as expected on Singapore Airlines.
1/10

✅ Trip Verified | I wanted to change my flight ticket on 20th of April and was rushed to send a confirmation for a flight change before 21st April which involved a payment of 300 SGD which I agreed to. Upon calling back a few days later after checking that my flight has not been booked over the website, the agent over the phone tried to salvage the situation by insisting that my original flight change booking flight was cancelled and instead, I now would have to pay SGD 1700 to rebook the flight change. There was no such cancellation of flights as the flight number of the "cancelled" flight was the exact same flight as the one that he proposed. I tried calling on multiple occasions and even though Singapore Airlines admitted their fault for messing up my booking, they would not change my flight at the original price that was agreed upon. As a result, I had to miss my other travel plans to London. My main issues are these: 1) After rushing me to confirm the flight changes before 21st April, which I did on 20th April, why was the flight not booked at the original agreed price of SGD 300. Is it a lack of competence that your staff can't operate a computer?
6/10

"I have no words for the hospitality"

✅ Trip Verified | I have no words for the hospitality the Singapore Airlines staff on the flight has shown me I have taken more then 20 flights this year but undoubtedly this airline is the best. I will surely and only try to fly Singapore. I am just amazed by the love and care they showed to my 7 year old from Mumbai to Sydney and coming back to India from Sydney. Thank you so much.
1 to 10 of 1393 Reviews