✅ Trip Verified | Mumbai to Delhi. Worst experience! Always flights are delayed. Worst airline operating in India. No time management. Many people are facing same issues. I am also waiting at Mumbai Domestic Airport and flight is delayed by 1 hour. . All in all GoAir airline one should never opt and should go for another better options available. 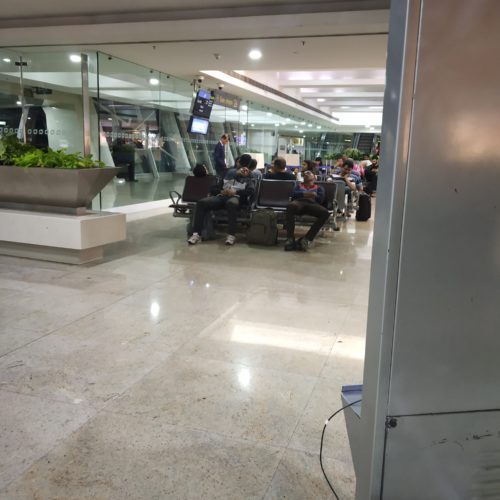 "They cant take my luggage"

✅ Trip Verified | Kolkata to Delhi. I came to airport at 6.30 pm for check in, my flight is at 11pm but I want to go privilage lounge. They cant take my luggage at this time and they didn't give boarding pass to me. How can I enjoy airport shopping and lounges - I am always enjoy lounge regularly but GoAir is not thinking for this
1/10

"worst experience I have had"

Not Verified | Delhi to Lucknow. Horrible airline. The flight landed late, and on top of that all the passengers were made to stand in the shuttle for half an hour. When passengers refused to keep standing inside the flight any longer, the ground staff started wasting more time loitering about the airline paying absolutely no attention or them. This was the worst experience I have had with any airline.
6/10

"staff on board polite and professional"

✅ Trip Verified | Delhi to Ranchi, it was my first ever flight experience. I had to book at the eleventh hour, so the tickets were a bit costly. Pros: GoAir has its own check-in counter at the Terminal-2 of Indira Gandhi International Airport. The check-in was very smooth and quick. At the security check also, I had an excellent experience. The staff on board were very polite and professional and were readily available. I am thankful to them for making this first flight of mine wonderful. Cons: Uncomfortable seats: I rather find the AC chair car of a train / seats of an air conditioned bus better. Overpriced food: I find the food both inside the terminal and the aircraft very much overpriced vis-a-vis it's quality.
1/10

"experience was awful and pathetic"

✅ Trip Verified | Delhi to Hyderabad. I had booked 3 tickets to fly to Hyderabad from Delhi for myself, my wife and my younger brother. My flight was supposed to depart at 8.55pm on 21st June. We three reached airport 70 mins prior to the boarding time against the minimum stipulated time of 45 minutes prior to the flight to take off. After the security checkup at 7:45 we were standing in the queue for boarding passes. As our turn arrived at around 7:50, I requested the lady on the counter to allow three of us to sit together and allot seats accordingly. After some 5 minutes of ambiguity, she told us that there was some issue and we have to wait. She told us to stand off the counter and wait for the issue to be resolved. It was now 7:55 and 60 mins were left for my flight to take off. At 8:02, after 7 minutes of delay, as the lady on the assistance desk checked her system a "duty manager" steps in and asks for the issue. The lady tells him that they are supposed to fly to Hyderabad and the counters are closed. I told the manager that we were waiting for quite long and its 8 minutes to go for the gates to be closed. He told us that you are late now and I can only allow two of you to go and the other one's flight will be rescheduled for the next morning. After a long heated argument, he issued 3 boarding passes to us after confirming the same to other duty manager at gate no 31. When we finally reached the gate he told that I have been instructed by the duty manager at the counter to allow only two of you to go. The third one may stay. He took my wife's boarding pass and told her to wait in the waiting area. When she asked her pass back this man told her to listen to him and do as he said otherwise all will have to stay here only. He was so rude and told me that it's my wish and I won't let you three fly today anyhow. After requesting for quite long at around 8:45 he allowed us to go and issue seats. It was my first flight with go air. The experience was awful and pathetic.
1/10

✅ Trip Verified | Abu Dhabi to Kannur. I Booked a business class ticket and worst terrible service. No Special Q for business class passengers. Up on my request only they put a " Priority tag" on my bag. They will change your seat as per their wish. They put Aisle Seat instead of my selected seat and when I notified, they changed. No priority boarding to flight. You may board on last just like entire economy passengers. Poor sandwiches and so called some poor quality dishes they serve. Baggage we received on destination last. Due to economy charges, may be you can opt this airline if charge is considerably lower. Otherwise don't opt for such a poor service.
1/10

✅ Trip Verified | I had booked my tickets for 14th of Apr'19 from Kolkata to Delhi and the flight departure time was 5.45 am in the morning. I received a message from the airlines at 4 am, when i had already reached the Kolkata airport and was about to get my boarding pass printed, saying the flight has been delayed by 3 hrs and the new departure time is 8.30 am. Then i saw a bunch of worried hassled passengers clustered against the Go Air desk raising concerns for the delay as this was very a big in operations causing huge inconvenience to 100s of them. Few had already booked a new earliest flight so that their plans doesn't get spoiled, bearing the loss of paying big amount from the live counter. I also did the same thing by booking a new flight ticket and headed to the counter for Go Air cancellation (as the attendants were not guaranteeing if the rescheduled flights will again be rescheduled). The same flight was again reschedule to 2 pm from 8.30 am. This whole scenario harassed a chunk of travelers, who ended up wasting time and ended paying huge amount for new flights. Who is to be blamed? Why is the value of time and money of the passengers are always ignored?
1/10

✅ Trip Verified | Bangalore to Mumbai . Very poor and nonsense service. On boarding service staff don't know which gate no flight is coming. After complete boarding, flight stop 20 minutes at same place. Cabin crew don't follow proper regulations. After landing cabin crew announcement please collect your luggage from counter no 1, when everyone reached this there is no luggage. After 10 minutes 1 person come to counter no 1, and told please collect your luggage from counter no 4. Very disappointed.
3/10

Not Verified | Pune to Bangalore. Worst web check in system. Tried to web check in but payment was not successful on repetitive attempts. Since payment was not successful and no confirmation on check in. Hence rushed to airport. Reached two hours before flight schedule to counter. Person on counter surprised me asking INR 200 for web check in. I said when it was not done, then why should pay. She was adament or I would say Robot and insisted for payment , else leave the counter without boarding pass. Very frustrating situation.
1/10

✅ Trip Verified | Kolkata to New Delhi. My friend booked this airline for me and turned out to be a real loss as they mishandled my baggage. Their customer care executive guided me to write an email along with pics attached instead of contacting their airport staff. After doing so their employees straightaway denied to take any action by replying back that I should have contacted their ground staff. What the heck! Even though I told them that their staff didn't guide me well, still no action is taken. I would recommend to go for Vistara or Air India instead of cheap airline like GoAir. They don't really accept their mistakes (even when enough proof is given) may be because they do realise that the mishandled baggage of customer is far more expensive than their domestic round trip. And yeah, the people responding to emails can't really understand what are you trying to say.
101 to 110 of 201 Reviews