✅ Trip Verified | Very impolite and rude cabin crew from ticketing counter to inside the plane. No just they don’t want help but also ignore you. And you try to catch the attention they literally yell and pass sarcastic comments. I was traveling with my 1 year old. They made our flight a horrible experience and on purpose they did not offer baby food in a 7 hour flight. All crew looked unhappy and were unpleasant to talk with mostly female crews. My flight from Dubai to Algeria was a nightmare because of crew negative behavior and lack of empathy for a mother who’s was traveling with a 1 year old.
1/10

"attendants should have stopped serving this pair"

✅ Trip Verified | It wasn’t a good experience at all. Young newly married couple who were clearly already pretty tipsy on boarding starting boozing hard as soon as it took off and kept a steady pace of drinking solidly for the entire 8hr flight. Cabin attendants kept giving them can after can even though they were getting very drunk. No consideration for others seated anywhere near them and it was really quite uncomfortable given the volume of their constant loud drunken chatter. After we landed at Dubai as I was standing in the aisle waiting on someone lifting something down from the overhead bins the male passenger staggered to his feet wobbled towards me and aggressively barked “where do you think you’re going eh?” Thankfully he was drunk enough I could sidestep him and leave him swaying around but come on Emirates you’re better than this. The cabin attendants should have stopped serving this pair long before landing as they were clearly intoxicated. Not good at all.
1/10

Not Verified | The first time travelling Emirates Business class and the last. They lost my luggage in Dubai and have now been without it for nearly 3 weeks. They have not contacted me once. I have phoned 3 times and have been promised $50 per day compensation, money back for all the clothes I have had to buy and calls back to advise on the progress of tracing my lost luggage. When I ask about how I claim this compensation they refuse to answer. They also refuse to answer timelines for tracing my luggage. They have been utterly useless and disinterested. I have called them, used Twitter and Facebook and they have delivered only generic responses. I have lodged two complaints through their complaints portal. No response. Please pick another airline.
1/10

✅ Trip Verified | Firstly, canceled flights departing Athens to Perth leaving us stranded in Athens for a night so we had to get accomodation. Then you had my booked with a 14 hour stop over in Dubai which is unacceptable. I requested this to be changed and it was to a later flight which worked better. I was reassured my partners flight had been linked (we had separate bookings) and that we were both on the new flight together (this was via virtual chat). We arrive at the airport to check in and even though he had received flight confirmation we were told he didn’t have tickets so we had to go get this sorted at the emirates desk. We’re both finally on the same flight only to be told we cannot be seated together on either of the flights even though we booked months ago and had already selected our seats together. The man at Athens airport checking us in did not care or try to assist us. Absolutely terrible experience and now my partner and I get to sit alone on an 11 hour flight. Completely unacceptable and very poor form from Emirates. I want a refund or some form of compensation for the hotel, meals in Athens whilst stranded and the stress of this whole situation. Completely ruined the end of our trip. I will never fly with them again.
1/10

"I simply wouldn’t trust them"

Not Verified | We arrived in good time to check in at Dubai only to find that my wife’s and 5 year old daughters seats had been changed to be apart on the flight. Previously we had been sent an automatic allocation of seats 2 days before the flight placing them together. Despite my pointing out that a 5 year old cannot travel unaccompanied, no one seemed to care and I had to insist that a manager at least be involved. We were then taken to the aircraft in the hope that some passengers might change seats. 20 minutes past with no good news whilst we were just left to stand by the aircraft door. At no point was any offer made regarding accommodation or alternate flight and, again, we were encouraged to accept that our daughter would have to travel next to a random stranger and presumably feed herself hot meals throughout the 7 hour flight. And then as the doors were about to be shut 2 seats together were suddenly found! When I complained formally about the distress this all caused, a curt reply was sent denying that seats had been changed at check in. My view of this airline feels irreparable damaged and I simply wouldn’t trust them with providing a reliable and safe journey in the future when they cannot even look properly at what went wrong on this occasion.
4/10

"Emirates is overhyped for nothing"

✅ Trip Verified | Outbound (BAH TO DXB): Smooth flight, generous amount of food for such a short flight and it was tasty as well Outbound (DXB to BHX): Disastrous, flight was overbooked and cramped making the staff take a long time to board, we economy passengers were basically treated like cattle. IFE wasn't responsive, and food especially breakfast were bad - portions fit for a child, and mid flight I realized the meals had given me stomach pains and nausea. Inbound (BHX to DXB): Extremely bad service, 3 hours after take off and nothing (not even drinks) were given, my blood sugar started going down and I got dizzy because of that. When meals were served finally, it seemed the attendants forgot to give a lot of people meals (including my seat mate). Besides that, my meal was terrible barely cooked pasta with a droplet of sauce, dead vegetables that was pathetically called a salad, and I was given a bread roll with nothing to use it with. Crew barely served any drinks, I got massively dehydrated (7hrs flight), and in the morning they refused to serve me breakfast because I woke up 2 hours before landing - not even a coffee or tea was offered to me. Overall, it's was a very below average flight and Emirates is overhyped for nothing.
4/10

"the worst experience by Emirates"

✅ Trip Verified | The flight in which i travelled from Dubai to Amsterdam turned out to be the worst experience by Emirates. Water was dripping from the roof and the crew took it very lightly. They were responding that we have informed to our manager, but no actions were taken about it till i landed in Amsterdam. I literally had to hold and sit with the plastic cover they had given as the blanket cover for most of the distance.
2/10

Not Verified | I had booked return flights with wheelchair service for my 60 year old Mom for AMD to DFW and back. The flight schedule was changed and instead of 3 hours bearable lay-over, now there was a 11 hour lay-over. They gave hotel accommodation but I was still worried due to my mother’s health and age. While returning from DFW and reaching DXB, they told my mother that she doesn’t have wheelchair booked. Due to less passengers, upon asking for help, they agreed to provide her wheelchair but what if the flight was packed? Strike 3: I talked to customer service about their initial refusal to provide a wheelchair and they had no answer but “Her wheelchair is booked”. So I asked customer service for the instructions that my mother should follow to get back to the airport from hotel and again the only answer to all my questions was “Our staff will be there to assist her everywhere”. After her hotel stay, my mother was dropped at the road-side of the airport with nobody to help. She asked questions to the passing-by people and thank God she was able to find her way into the airport wheelchair counter. I genuinely liked Emirates but this is very disappointing and inconvenient especially given that mother is a senior citizen. I’ll never fly emirates again.
1/10

"Book with another airline, never again!"

Not Verified | Having purchased first class tickets for my wife and I to return to New Zealand in January we were very much looking forward to our return journey having booked business class on the outbound flights from New Zealand. The booking was made and fully paid for four months ago. I have been advised by curt email that I have been downgraded to business class, no mention of apology, explanation nor compensation or refund. It gets better, there seems no way of contacting Emirates in New Zealand their advertised phone number is cut off. What a shambles of an airline and we haven't even left the ground. This is how they treat premium paying clients, forget it. Book with another airline, never again!
8/10

✅ Trip Verified | My first experience of Emirates new premium economy class. Food and service excellent. Seats however are a little bit firm and not as comfortable as the pictures suggest. Also the recline is quite big so you can feel a little trapped once the person in front refines. Access to three toilets for 50 plus passengers is a real bonus and you get glimpses of the flight deck if that is an interest. I paid very little in cost difference which was the attraction but Emirates economy is very good in any case so May not always be a choice I am willing to pay much extra for. Also it was a two meal service for a seven hour flight which is good. 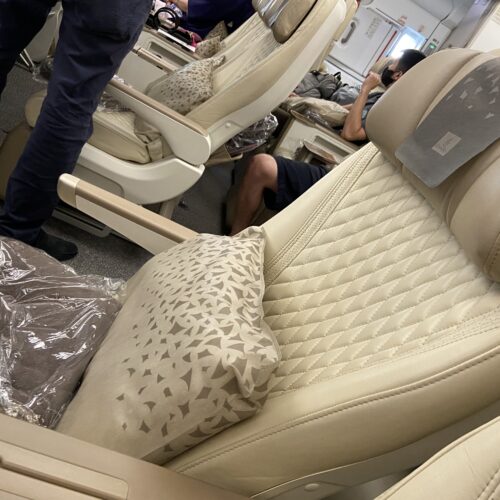 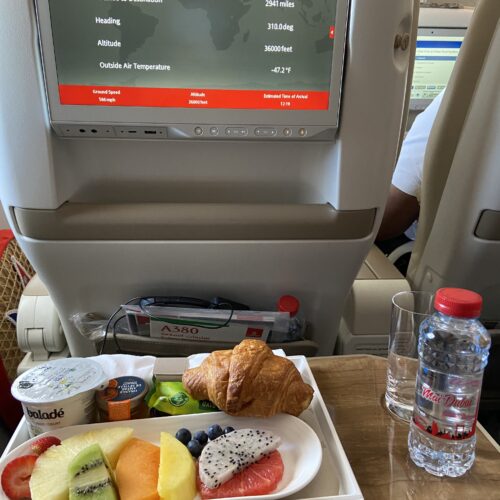 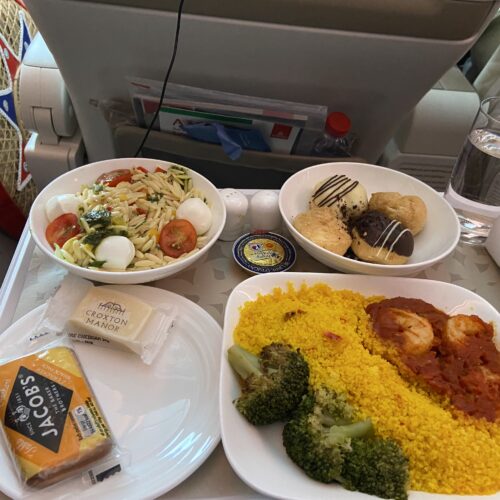