✅ Trip Verified | I have been flying Emirates for 15 years and was a gold member for much of that time. From 2007 - 2012 their customer service was almost unmatched but things have been getting worse over the past 10 years or so and now I would say it is the worst of any airline in the world. I have flown Emirates 3 times this year out of necessity and each time it has been a complete disaster. Emirates has now switched from operating like a typical full service carrier to something more akin to a low-cost airline. Not only do they have 4 fare classes (economy, premium, business & first) but each of those classes is split into 4 types (special, saver, flex & flex-plus). The saver fares usually look too good to be true because they are! If you find a low price on a special or saver fare when booking in advance you may think you got a good deal but try to make any changes to the flight and you will soon find that the airline tries to gauge you for extortionate 'fare differences'. Even if you try to change your flight to one that costs exactly the same as the flight you are on and there are empty seats in your fare class, they will tell you that your 'fare type' is no longer available and extort you for hundreds if not thousands of dollars to make the change. Even if the flight you're on is full and the flight you want to switch to is half empty (something you think the airline would be glad of) they still try to gauge you. If you're lucky enough to get through to customer service, they will not offer you any assistance whatsoever - their job is just to extract as much extra cash from you as they can. I have come to expect this and so avoid Emirates where I can. My latest experience with Emirates customer service was far worse than my already very low expectations. I tried to use the Emirates app to make a change to the flight time. I had a Saver fair so there was a change fee of £100. This was clearly stated in the terms and conditions of the ticket so I was happy to pay. However, when I got to the screen to put in my credit card details, the app crashed. I tried again and the same thing happened. Rather than keep trying to work with a defective app, I called the airline to make the change over the phone. A recorded message said that the airline was extremely busy and that if I was not flying in the next 48 hours, I should hang up and call back later. I complied with this request and hung up the call. As soon as I got back to my hotel room, I got on the laptop to make the change. despite only being a couple of hours later, there was suddenly a 'fare difference' to pay. Since it was the Emirates app that had failed when I tried to make the change and since their call center was too busy to take my call at that time, I was sure that Emirates would do the right thing and match the price from when I had first attempted the change. I thought wrong! I spoke to a hopeless fist line call center worker who could not help so I asked to speak to a supervisor. The supervisor said that he did not have any authority to make changes to flights, despite the fact that he told me that he was the most senior person in the airline I could speak to. Eventually, I was put through to another man a second level supervisor (or "officer")
1/10

"It was a huge disappointment"

✅ Trip Verified | I always travel by Emirates and liked it but this was my first time traveling with my 14 months old baby. The seat I got was too small to fit us both. I didn’t know I have to carry my baby even when he’s asleep. I asked for bassinet and they said if baby’s legs are not straight while lying in bassinet then it’s not for the baby. I had to carry him throughout the flight because he was mostly asleep. When they provided me meal I couldn’t open my table as while holding baby table couldn’t be opened. I barely ate a little and gave up. Meal for baby was also not provided although it was included in the ticket. It was a huge disappointment. I couldn’t use inflight entertainment either for baby because there was no room. 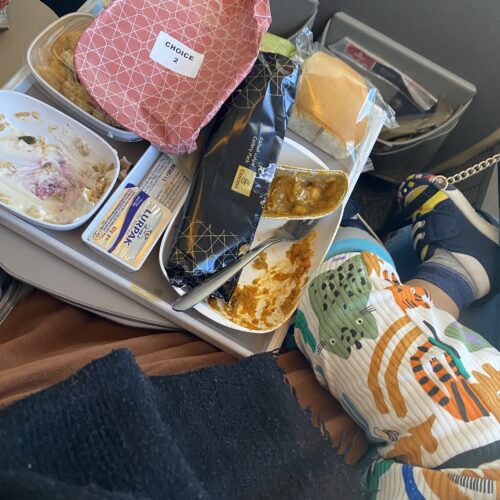 "The service was excellent"

✅ Trip Verified | I got a last minute upgrade offer and went for it without contemplation. The business class seats on the Boeing 777 were comfortable and I managed to get a very good sleep. The service was excellent and I felt really spoiled and taken care of. The meals were also good starting with the beef and rice dinner and ending with a delicious omelette breakfast. I remember the Emirates infotainment “ICE” had more variety before but I was still kept well occupied. 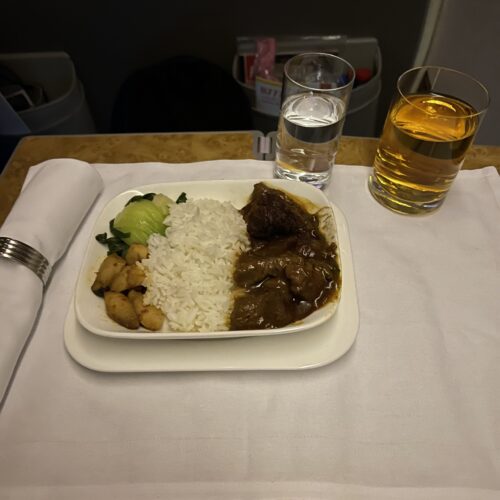 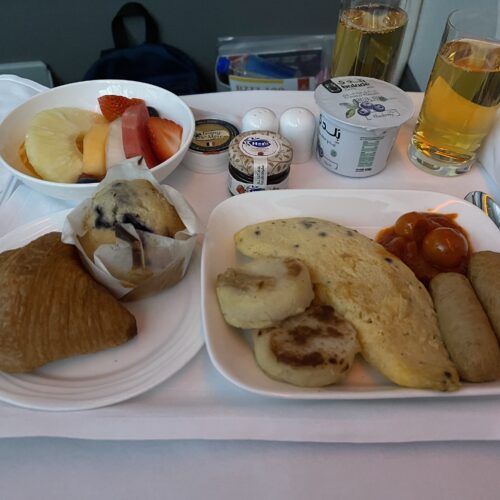 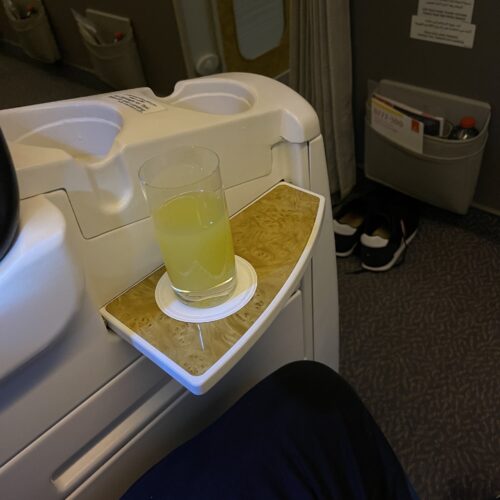 ✅ Trip Verified | The flight departed a little late. Boarding was organised. Had Aisle seat 84C which chose and paid for At booking. Gluten Free meal served early and cabin crew checked name and request for Gluten free. Best Gluten Free meals on any airline. The cabin crew on this flight worked nonstop. Water and soft drinks between meals which was good. One cabin crew stood out on this flight she was constantly attending passengers needs and had a bright energetic personality. My husband and i arrived slightly late into Brisbane but safely. First flight of 14 hours which i never felt jet lagged and flown this flight many times put it down to only drinking water with meals whole flight.
9/10

"flight to Dubai was good"

✅ Trip Verified | Venice to Dubai 12 November. Check in very good at Marco Polo Airport. Some one in Emirates uniform directing passengers. At check in the staff not wearing Emirates uniform but excellent customer service and said she would check if once we arrived in Australia she could give us boarding pass for our Qantas connection in Brisbane for final destination but was not able. Later at boarding gate called over and received Boarding pass for final onward journey. The flight to Dubai was good, Allocated twin seats which booked and paid for and Excellent Gluten free meal served early. Cabin crew came around with water and soft drinks between meals and we arrived safely in Dubai for onward connection to Brisbane.
1/10

✅ Trip Verified | Absolutely awful service both inbound and outbound traveling with an infant. Emirates made a mistake on my booking with an infant which resulted in me having to spend 2 hours at in the airport running between check in desk and ticketing desk with a hungry crying infant to rectify the mistake Emirates created. Onboard the return flight, the flight attendant refused to provide bottled water for so I could prepare infant formula despite having charged me 10% ticket price as infant fare. Finally, on arrival we found our stroller damaged and the baggage team is proposing to offer is 500 AED which is insufficient to replace the stroller. Absolutely awful experience. I urge travelers with infants to choose a better airline. 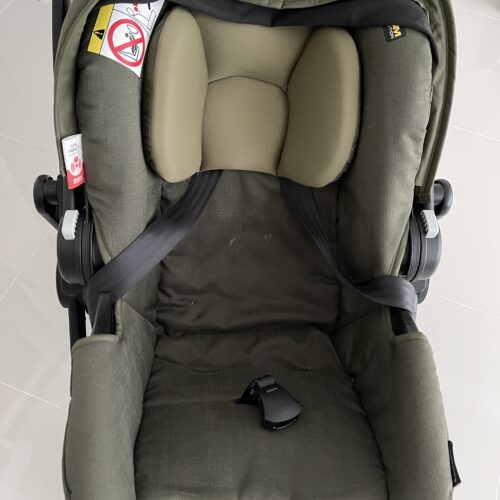 ✅ Trip Verified | Overall business class is quite good with friendly and polite flight staff. Few cons: seats are quite narrow. I'm 5'4", 125 pounds and my elbows were hitting either side. You can lay on your back quite comfortably but I don't know how a bigger person will be comfortable especially on long haul flights. In each of the 4 legs at every meal time, the flight attendant asked me " do you want to eat dinner/ lunch/ brunch?". Of course I would. Where would I go for sustenance on a 15 hour flight? It's not like I could jump out the plane for takeout or fix myself a sandwich. Felt like a weird question like I was waiting for a free meal in a soup kitchen. Meal service was super slow. On one of the legs, the flight attendant set my table for brunch and the actual brunch arrived 45 minutes later, during lunch time. And my vegan brunch was just a Chia seed pudding which was probably dumped into a bowl from a Mason jar so not sure why the delay. The vegan options were quite pathetic and almost unpalatable on 2 of the 4 legs. Just a mush of steamed rice/ noodles and veggies isn't really a vegan meal. For a $5k ticket, I'd have hoped Emirates would've been a little creative and thoughtful with the vegan meal.
1/10

✅ Trip Verified | Emirates, together with its agents, is engaged in deception and fraud in the exchange of tickets. I couldn't change my flight tickets for 2.5 weeks! They changed me a few hours before departure and took a fine of 200 euros. If you want to ruin your trip and vacation, contact Emirates, they will do it professionally!
10/10

✅ Trip Verified | Superb airline. I really can not fault the airline at all. The cabin crew are extremely attentive, polite and friendly. The food was very tasty. In flight entertainment was very extensive for two 6 hours flights.
1 to 10 of 2200 Reviews