"the refund amount is low"

Not Verified | I recently booked flight tickets for me and my family to fly from Hyderabad to Bangalore. But due to the bad weather condition in Bangalore and due to the heavy rains I decided to off my journey and when I decided to cancel all of my tickets the airline showed me a refund amount of not even 10% of the amount I paid. I can say that it is the worst airline ever. I not even showed up and I am cancelling it far more than 24 hours but still the refund amount is low where I felt very bad.
1/10

✅ Trip Verified | It was a early morning flight and I was unable to do web checkin. I approach to the AirAsia desk and staff was totally unprofessional. She just ignored and start attending the other customers. After waiting for a while she just walked out from the window. I will never recommend AirAsia India. Horrible ground staff.
8/10

"seat pitch is something that needs to be kept in mind"

✅ Trip Verified | After a long time, I had decided to fly back to Bangalore on Air Asia on this afternoon flight as the timing was convenient for the arrival. A point to note is that the check in for the flight has opened almost 2 weeks before the departure of the flight as opposed to the usual 48 hours which is present on the other flights. Also another point to note is that the default seat selection which is provided by Air Asia seems to be free of cost, however if we try to change our seating rows, then a charge of Rs 250 needs to be provided for the window / aisle seats. As me and my wife were travelling together, I had decided to go with the default seat selection so as to avoid the extra seat fares. During the check-in the staff was proactive enough to accommodate me and my wife in a separate line which was faster than the usual long queues present. Also the crew wanted us to provide a feedback on the check-in process and how it could be improved and this was a pretty fun thing that was done. Boarding started well on time and one thing to note is that, if you are a person on the taller side, the seats could be a bit cramped. I have flown on other low cost carriers and Air Asia seems by far the most cramped when it comes to seat pitch. On short haul flights they are fine however on flights of more than 2 hours it could get uncomfortable. Also during boarding, I did not see the crew welcoming everyone on board which is something that was surprising considering how well the staff at the check in counters were. Flight landed well ahead of schedule and baggage was also retrieved quickly. For the money that was paid, the service provided was nice. However seat pitch is something that needs to be kept in mind.
1/10

"wait in Pune airport for 7 hrs"

✅ Trip Verified | We booked our flights for 21st sep 2021 from BBI>DEL,& on 28th sep 2021 from DEL>BBI (direct flights ,no stop-over) in advance on 13th August 2021 so that we did not suffer by anything. Today we received a notification that our direct flight is going to be connecting now from BBI>PNQ>DEL (with almost 7 hour of halt in PNQ). Now my elderly parents have to wait in Pune airport for 7 hrs which making me furious. You are not able to give me earlier or later (+- 2,day flexibility) flight because you do not have any direct flight so its none of my problem. I purchase for some service and I deserve the same.
8/10

Not Verified | The AirAsia airline was pretty good. My height is 183cm even then I felt comfortable with the leg space. The airhostess were very polite and helpful they changed the seats too, those are willing to change there seat can change and he arranged the passengers who are sitting in middle seats to window or side corner seats and it was in budget. Tthe ground staff were also good but not so good in politeness But overall flight went well.
1/10

"insisted on redistributing the luggage"

✅ Trip Verified | There were 3 passengers (including a kid of 2 years) and 3 cabin bags. Total weight of 3 bags was less than 21 kgs. It was just that one bag was 8kg and others very light. So it should not have been an issue. But airline staff insisted on redistributing the luggage among bags. I see no point in doing that.
1/10

"received my refund after 6 weeks"

Not Verified | Made an online booking since the fares were cheaper than others. To be fair to them the flight crew were helpful and attentive on the outward journey. The return flight was cancellede. We were promised a refund. After a month of waiting, started communicating via e mails. Absolutely no response. Calls and mails received but no refund. After much follow up and constantly asking received my refund after 6 weeks.
10/10

✅ Trip Verified | Extremely wonderful. Definitely worth flying with again. Wonderful and attentive crew members. Cheerful and always with a ready to help attitude. Keep up the good work.
9/10

Not Verified | I would like to share the pleasant experience I had, flying the Air Asia from Bangalore to Jaipur via Hyderabad on 19th Feb'21. It was my 15th Yr wedding anniversary and I wanted to make it special for my wife. So, I checked with the cabin crew if they could do something special for the occasion and they immediately obliged and made a special announcement wishing myself and my wife and the entire cabin crew came and wished us and sang for us which was amazing. They surprised my wife with the gift I had bought for her and made me propose in the flight which was romantic and nice. The cabin crew members Bindu and team where really amazing and they did a fantastic job. Like to thank them and the captain for making our day special and something to remember forever. 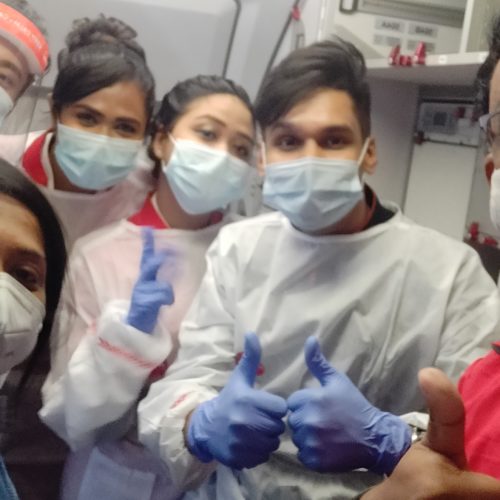 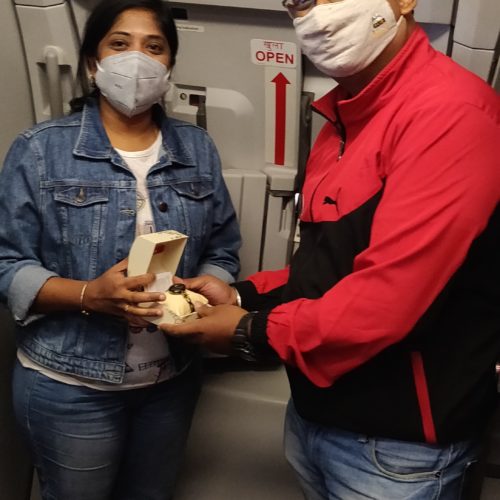 "Kudos to the entire team!"

✅ Trip Verified | Kudos to the entire team! I had a morning flight from Bagdogra to Kolkata. It was a short flight but I must say I had one of the best experience so far. Smooth and Comfortable! A special mention of in-flight attendants Anjita and Deepika they definitely deserve praise especially in time of COVID. The safety was well taken care of. They were extremely hospitable and at the same time professional. Keep up the good work!
21 to 30 of 102 Reviews