Not Verified | Seat 19C. Limited legroom for the economy seats. Wifi was ok but kicked me off more than once. The amount of recline seems to be about 10-15 degrees. Person in from of me reclined and almost caught my iPad. Width was normal for an economy seat. The seat was clean.
7/10

✅ Trip Verified | The seats are confusing. They do not match the outside row. 22 window seats match to 21 center row. Several people sat in the wrong seat — me too. Also center row seats E & G straddle a bar supporting the seat in front. So my underseat bag was placed weirdly, partly on my neighbors feet. The seats are narrower than the seats in my first leg of this trip. Otherwise its airy and as is customary - a half pinky finger biscuit with a beverage. Service is excellent! 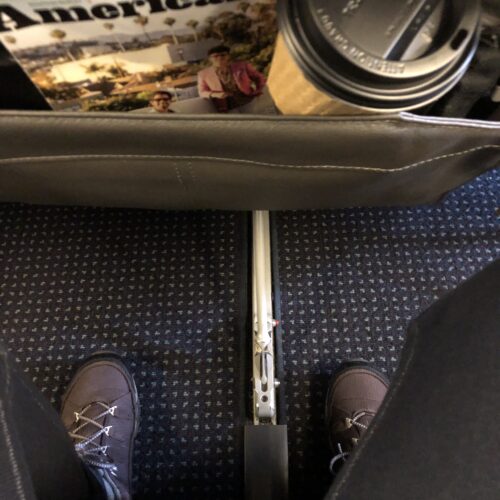 Not Verified | Literally the smallest width seats possible. Sitting in the seat and the arm rest can't even go fully down. I'm 6'2", 220lbs. The oppression next to me weighs more and has an even wider hip span. We are sitting on top of each other to fit in the seats.
1/10

"Avoid AA at all costs"

✅ Trip Verified | Miserable staff, poor customer service, and constant delays without communication to customers. No one seems to know anything. The plane was clean, but old. The wifi did not work. Avoid AA at all costs.
5/10

"just not a very good seat!"

Not Verified | On my flight from PHL to BOS, I got a seat that was old. It was uncomfortable, with hard armrest, small tables, no IFE or power, fixed headrest, and minimal recline. It was just not a very good seat! At least the legroom was decent!
3/10

"at check in we were separated"

✅ Trip Verified | I am unhappy that despite speaking to a rep twice to ensure my family would be seated together, at check in we were separated. The worker at the gate could not have cared less. The airline does kit know anyone’s medical or immune status. Given Covid they should make lite if an effort to respect requests and if not, there is no need to be rude.
8/10

✅ Trip Verified | I flew many times with American Airline and majority of the time I flew Business or First Class. So I sort of knew what kind of service I will get. I also had flown other major airlines and American Airline Business Class in general is about average performance I don't recall any unfavorable experiences. What I experienced with AA Flight 700 from SFO-PHL on March 7th 2020 was absolutely deserve recognition due to Flight attendant Suzy. She showed warmth, customer service with focus on solution. After I settled down I first switched seat with fellow passenger in order to be seated in the center Isle with my husband. A while later Suzy came to take the food choice and she apologize for only oatmeal left. Suzy saw my hesitation, quickly said she will try to see what she can do, she eventually found a ham and egg tray with a lot of fruits. After I finish the meal I decide to lay flat for a while and realized the seat will not move or recline. She came to apologize and offer me some miles compensation without me asking for it. My experience with Suzy had a direct comparison with my husband's flight attendant. It was night and day. My husband also got an oatmeal breakfast, but it was coldly announced to him without apology and no other interaction during the 5 hours flight. In contrast Suzy walk along the isle to fill my hot water, very attentive. Suzy needs to be recognized.
1/10

"seat is one of the smallest"

Not Verified | The pitch of the Boeing 777-300 seat is one of the smallest in the industry. I am 6 feet tall, 190 lbs. and both my shoulders exceeded the width of the seat. Outrageous given the average size of US passengers.
3/10

Not Verified | The Boeing 787 has horrible seats for a long haul flight. I'm six feet tall and the headrest didn't come up beyond my upper back. 9 hours with no place to rest my head. I've never had that probably on a Delta flight.
2/10

"a poor all around design"

✅ Trip Verified | The seat shapes do not work well with the average body. It forces you into a semi-hunched position that really hurts your back. The height of the seat back is way too short; I’m 5-8” and my head is above the seat. The head back doesn’t raise enough to meet my head. I’ve had to put a coat behind my back to sit me upright correctly. The seat is also so high, you can’t see out of the windows. The only saving grace is the padding is nice. Just a poor all around design.
1 to 10 of 105 Reviews