"one of the best lounges"

Not Verified | EVA Air uses the new United Airlines Polaris lounge at San Francisco International Airport for its business class passengers. What a great lounge - easily one of the best lounges I have used. As soon as you pass security, the lounge is directly on your right. It is extremely large, taking up two floors. The lower floor is mainly a quiet space with lots of individual work spaces and seating to relax. The upper floor is the bar and dining area, easily able to seat a couple of hundred people or more without feeling crowded. There is dining table seating and individual work spaces, most with USB and electrical outlets. The bar is on par with any five star hotel and there is both a open buffet and a sit-down restaurant where you can order off a menu - all free. The food was really high-end and the deserts were to die for; Italian cannolies, hot fudge sundaes with Ghiradelli chocolate, cookies, cakes, etc. All in all a great relaxing experience while waiting for a 12 hour flight to Asia.
10/10

✅ Trip Verified | The United Club in London Heathrow is my favourite United Club (apart from Polaris Lounge) and a very good lounge. Seating is comfortable and there is enough space. The Bar has a good variety of drinks and I love their cocktails. The food offering is very good and consists of salads, warm dishes, cold dishes and deserts. The Club is perfect. 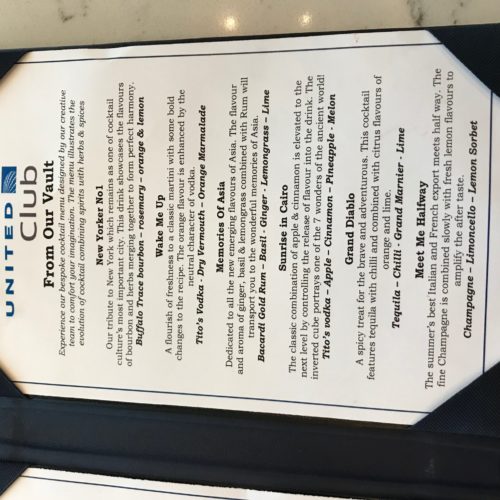 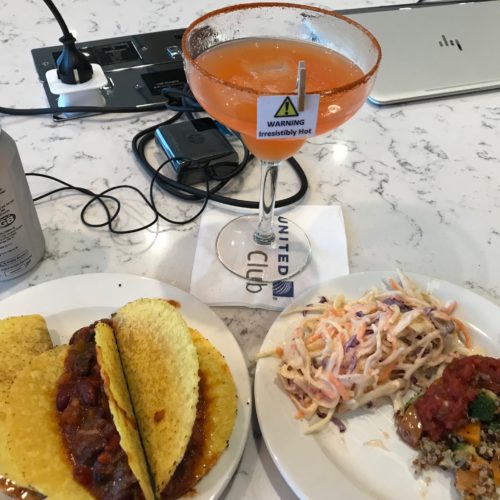 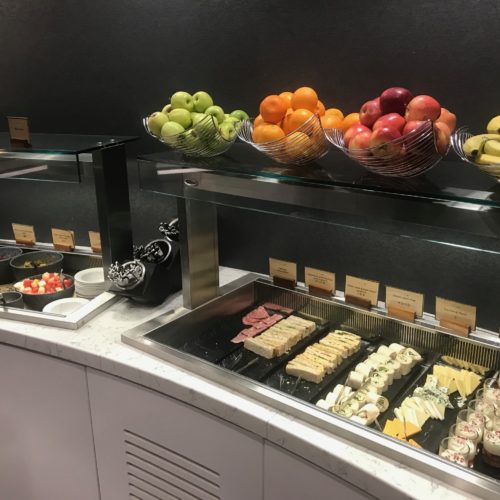 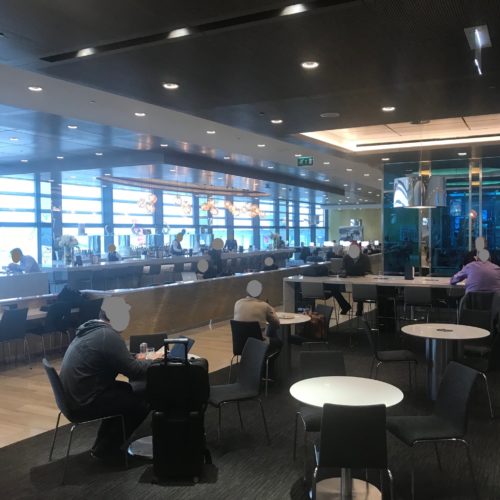 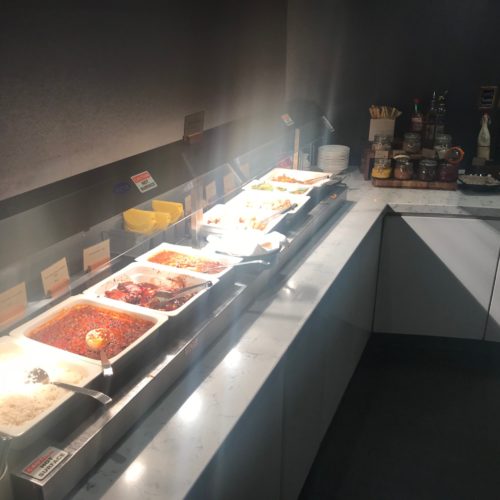 "The lounge was full"

✅ Trip Verified | The lounge was full and it took me a bit to find a seat. I enjoyed the selection of light foods which was enough for a pre board (photo attached). The front desk staff need to smile a bit more! 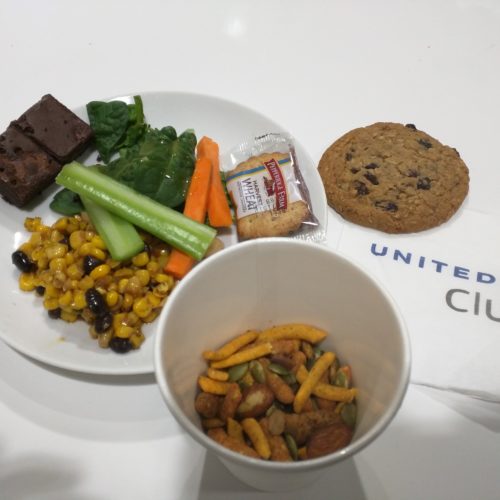 "it is not worth the money"

❎ Not Verified | This is a review of the United Club in concourse F, not B or C. It costs 59$ to go in, but I went for free since I am a MileagePlus member and had a free pass. The lounge was very small but nice. There was views of the ramp which I loved. Wifi is free and worked very good. There were a few workers that were very helpful. There wasn't very much food however, Just some fruit, brownies, and some rolls. It wasn't the best experience and I believe it is not worth the money, at all. Not very big, not many staff, and poor variety of refreshments.
2/10

"no showers or nap rooms"

✅ Trip Verified | Pathetic. I wanted a good meal before my flight to Singapore. I got soup, a bread roll and cookies. I expected real food, not cut rate, mass produced. The chairs were ok, plenty of power plugins but no showers or nap rooms. United continues to show it is taking the cheapest route possible. Thank goodness my lounge card allows access to Star Alliance club that treat you like a valued customer with real food, showers and nap areas to get through those multi hour layovers.
6/10

"comfortable with a fine view"

✅ Trip Verified | The United Clubs have been steadily improving across their system. The Denver club is an excellent example of what United can offer, even in a domestic lounge. The rooms are open, spacious, and comfortable with a fine view of the tarmac, comfortable seating, and an adequate offering of food and beverages. The lounge at gate 7 of IAD is another story entirely - the clubroom is much too small for the number of customers ( 5:00PM on a Saturday ), and it's dark and cramped. I imagine that the food offerings are standardized throughout the domestic lounges, but if there is nowhere to sit to eat or drink, it doesn't really matter what is on offer. The personnel at the club are friendly and hard-working, but customers who have Star Gold status would do much better to trek to concourse B and visit the Lufthansa or Turkish Airlines lounge.
1/10

"back to low quality"

✅ Trip Verified | I am a paid member of the United Club, and have seen it go from low quality, to seeking to improve, back to low quality. The original low quality was the fact that the United Club, unlike many others, only offered simple snack items--cheese, crackers, pretzels and such. I didn't realize how bad they were until I visited a Lufthansa lounge. But then a few years ago United did some surveys and started offering better food, even though at the same time eliminated almost all alcoholic beverages for free. The food included a rotation month to month of different kinds of soups, some cold cuts, even something like lasagna at some lounges at dinner time. Now, for several months, at almost every United Club, the standard 'food' is tomato soup, snacks and salad items. On top of that, they did a Terminal E remodeling in DFW and moved gates and the lounge to about gates 28-32. Then several weeks ago they moved the gates back to about 1-8, while leaving the lounge in the old location! They talk about opening the new lounge 'in late 2017.' I'm paying $450 a year to occasionally have some tomato soup and snacks, so, along with giving up on being a loyal United frequent flier, I'm also giving up the almost useless lounge.
4/10

"a most disappointing experience"

❎ Not Verified | We were flying EVA's Royal Laurel class from SFO to TPE and onward to Singapore. The lounge that EVA had been using was closed so that United could build a new and improved Polaris Lounge for its international flights. So we were directed to the United First Class Lounge. Thinking it would be a pretty good experience, we got through security in no time and headed off to the lounge, which is located downstairs from the main floor. This was a midnight flight, so it was about 9:45 when we arrived. To say the lounge was disappointing is an understatement. Food and beverage was limited, although the red wine was at least drinkable. WiFi was spotty and the lounge just looked old and dull. The restrooms had definitely seen better days. It was a most disappointing experience. About the only positive thing I can say was that at least I didn't have to mess up my back sitting in one of the seats at the gate.
8/10

"improvement of clubs is encouraging"

✅ Verified Review | Because I am a lifetime member, the steady improvement of these clubs is encouraging indeed. The domestic clubs have not and can't be expected to rise to the level of what is offered at LHR, NRT, or HKG, but the Houston club has gotten considerably better in both food and beverages available. House wines. ( including prosecco) and well liquor are offered for free, and more refined beverages can be purchased. The food offerings don't rise to the level of meal quality, but I would dare call the snacks gourmetesque. There was even an attendant circulating with a tray of very tasty nibbles. There are big picture windows that look out over the apron, but IAH is so large that the active runways are well removed. I have a six hour layover on my return flight later this month, and I'm actually looking forward to spending some more time in this club.
5/10

✅ Verified Review | This United lounge located in Terminal 3 at San Francisco was very crowded. Despite the large volume of passengers, the lounge was relatively clean but had a limited selection of food and drinks. Food was limited to soup and salad and light snacks. Drinks at the bar were, for the most part, not complimentary as in other Star Gold lounges - with the exception of house wine and beer. A nice feature was the air side bay windows which offered a nice view of airport activity.
21 to 30 of 203 Reviews