"The worst airport I have been at"

✅ Trip Verified | Not recommendable: little and unfriendly personnel, long waiting queues for dirty restrooms, long queues for just a coffee. But absolutely a catastrophe was that the queues for the restrooms, the coffee shops and the boarding are not separated somehow but intertwined, no room to move at. I'm not interested in airport architecture but also couldn't see anything that would be worth the hype about this airport. Soundproofing at least was definitely not on the architect's agenda - it is a very noisy airport. Besides that the boarding mingled with everything else, there were hardly any seats or areas to rest, or even stand. The worst airport I have been at, and I would always try to avoid this airport! PS: one has to give stars otherwise this site doesn't work but even 1 start partially is too much.
9/10

"quite a neat and efficient airport"

✅ Trip Verified | I live in Switzerland and have been mostly flying in and out of Zurich Airport because it has direct flights to many of my usual destinations. It is quite a neat and efficient airport, and overall I do like the experience. However, there is an annoying bit to it: every time I arrive and go through the green corridor, if there is a customs officer there, they always stop me to ask a few questions. I suppose it's because I have a large piece of luggage usually (even if it is half full). Probably they are also somehow profiling based on the passenger appearance, and I do not dress up for flights. This would be fine maybe once in a while, but every single time is too much. For comparison, I have not been stopped by a customs officer at any other airport in the world, in Switzerland or elsewhere, in five years. This time, I had enough, and I will be flying into the Basel Airport instead whenever I can from now it, even if it means adding some time to the journey or paying a higher price for the tickets.
1/10

"she’s doing a terrible job of representing her country"

Not Verified | I’ll never travel to, or through, Switzerland ever again just to avoid this airport. The lady at customs was making up rules that didn’t exist and was screaming at us when we didn’t know what she was talking about. It wasn’t only us she was screaming at either, the people behind us who were on the same flight as us, got screamed at as well. I was calm, but I could not get a word in to talk with the lady because she would cut me off and scream. She accused my fiancé of being illegal just because he was born in Italy. We tried explaining to her that he’s a both a US citizen and Italian citizen. She said she needed proof of US citizenship. We showed her our US passport and she said that wasn’t good enough. We asked her where on the website does it say we needed to provide documentation of citizenship. She couldn’t answer my question and then just let us go through. That’s how you know she was making up this “rule”. If it was a real rule, we wouldn’t have been let through. I know not all Swiss people are like her, but she’s doing a terrible job of representing her country by screaming her head off at people and accusing people of being illegal.
2/10

"Covid is a great excuse for so many things!"

✅ Trip Verified | We were very disappointed with the airport’s services. Flying with Swiss Airlines business class we would at least expect some Swiss lounge (that was advertised). Instead of it all of them were closed (we arrived to the airport around 15.30), most of the shops were closed as well (unless you want to buy a watch, there were plenty of them). We were running around the airport trying to find an open lounge or at least a decent restaurant, with no luck - and so I was informed, when I called the info service (nobody was at the box as well). Their excuse? Because of the pandemic situation. Yeah, Covid is a great excuse for so many things! If Swiss Airlines dares to charge so much money for 50 minutes flight, deliver us the services, for goodness sake!
1/10

"worst experiences at an airport"

✅ Trip Verified | This was one of my worst experiences at an airport. As we had to take a Rapid Antigen Test, we arrived 2.5 hours early. There were no signs as to where you can find the Test Centre. We had to walk a long distance to get there just to find a massive queue. For about half an hour there was only one receptionist and we advanced just 10 steps so we really started to worry that we are going to miss the boarding. Right behind us there was a very arrogant young man without a face mask and the person at the reception didn't say a word about it, neither did the person at the registration desk. When I told him that face masks are compulsory, he said 'Go back to England or wherever you came from'. After 1.5 hours, we were tested and we ran to the gate. We arrived there literally in the very last minute but after boarding the plane was delayed as we had to wait for 5 more people who had their tests done. Just 5 days earlier, the PCR test took 5 minutes at Heathrow Airport, in Zurich you can't register for the Antigen test, only for the PCR which is absolute nonsense. We flew to Zurich to say goodbye to a close relative who died there. We were in a lot of stress and grief already but this just topped everything.
1/10

"never, ever, have I had an experience like Zurich"

✅ Trip Verified | My experience in the security line of Zurich Airport was traumatizing! The incident was summer of 2019, not this summer, but I am still moved to make a review, in part because I want to read the other reviews to see if my experience was a common one. I queued at the security checkpoint with the small rolling bag that I had brought with me from LA and had used as carry on from LA to Heathrow, then to Dublin, and Dublin to Munich. I had taken a bus from Munich to Zurich so luckily I dealt with them only once. The point being that all of the contents of my bag through each of these destinations were fine, but Zurich did not like my face cleanser because it was in a 150 ml container. They went through my bag of liquids and checked each size stamp and then proceeded to throw it away before I convinced them that I needed to put some of it in another container at least, because it was expensive stuff. The young man and older woman sneered at me but let me do it, so I tried to move into another line because I knew they would pick on me, but they pulled me out of the line I was in, and had me wait in theirs, which was longer. I had moved a quarter of it into my other container, which previously held conditioner. When I finally got to the screening, I was prepared, so I moved in front of a slower moving couple, and the man and woman behind the counter told me not to cut in line, and sent me back to the end of the line. I did not cut them by European and American standards, they were one ahead of me, and were going slow, while I was prepared and fast. The man in front of me asked if I wanted to take his spot, because it was clear I was distressed, but I told him no, I would prefer not to, because the couple behind the counter would likely bully me for "cutting." When I finally got to the pair they threw my face wash away (with glee and making sure that I saw how much power they had), and then smiling, wished me a safe trip and a good day. I was so furious in part because by this time, I was late for my flight, and by the time I got to my gate, the plane was boarded and they had to cab me out all on my own which was humiliating. I have flown a lot in the states and in Europe (in 2019 I was on a plane twice a month) but never, ever, have I had an experience like Zurich.
1/10

✅ Trip Verified | Extremely disappointing! After duty-free shops, you have to pass a passport control even we all are in Europe and only one huge line fo European Citizens, no one E-gate open! Then it's no warning that after passport control you still need to take a train! Really you have to warn clients that after bag security check you need at least an hour to get till the gate! No one cares and no one helps, no one let you in front if your boarding has started! Not only me but I saw other people who rushed to the flight, no warning that it's a long journey till gate and no help from airport staff! Shame on you! Switzerland supposed to be high standard country and so cheap heartless action from airport staff! Thank you for helping me to miss my flight on Valentine's day and my husband instead of valentines dinner was forced to provide me with another ticket! No one cared, no one took responsibility for this! 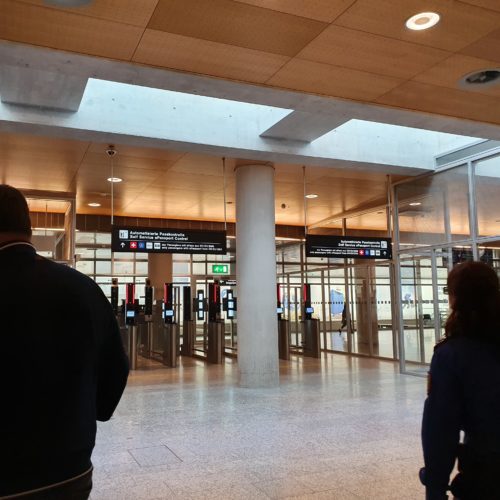 ✅ Trip Verified | The largest airport in Switzerland is generally a comfortable airport but the whole design is a bit dated (70s style). Security checks are ok and efficient. Border control is friendly and competent. Signage is generally ok but can be confusing sometimes. There are tons of luxury shops and duty-free shops around, most overcharge you. Transportation is very convenient, like trains, trams and bus options readily available. Transfering at this airport is generally ok, but be aware that distances can be big.
5/10

"confused with the signage"

✅ Trip Verified | This is my third review of the Zurich airport. It still is not my favorite airport to navigate. Prepare for a lot of walking, a queue for passport control, and to get confused with the signage.
2/10

Not Verified | Got my duty free stuff confiscated! I have taken connecting flights numerous times throughout the world and have never had my duty free items, bought from the origin country, confiscated, as it happened today at the Zurich airport. I am surprised that the authorities do not understand that duty-free means it has been bought from inside the airport and it doesn't pose any harm. I bought such a special bottle of wine for my friend in Canada (destination), but wonders of Zurich airport authority, it was taken away. I haven't encountered this anywhere else. So disappointed and upset with this incident. I thought the Netherlands is a vacation destination, but with such insensible rules and regulations prevalent here, I am never stepping foot in this country. Well, from now on, not even for a connecting flight.
11 to 20 of 170 Reviews