Not Verified | Utter shambles. I was in transit but baggage can't go through seamlessly, unlike at every other airport I have transited through. Security was a nightmare, not even trying to maintain any social distancing. The place is a health hazard.
5/10

"helps their friend to skip the process"

✅ Trip Verified | I'm TSA Pre Check traveler and I was surprised to see an Officer give special treatment to a couple by helping them skipped the lines. The way they were interacting it was obvious the knew each other, how can I feel secure when we a TSA helps their friend to skip the process, what else do they do? Everything else was good, TSAs are busy and working under a lot of stress, so they are stern and they don't need to be friendly and I'm ok with that.
3/10

"Not one beverage vending machine"

✅ Trip Verified | Arrived from LAX at 12am with a 9 hour layover. Walked the entire terminal looking for a bottle of water. Not one beverage vending machine. Every vending machine I came across sold either Sim cards or headphones. I found one food vending machine but no beverages. If you don't save your empty water bottle you can't refill at the tap water fountains they do have, if you don't drink tap you will die of thirst until shops open at 6am. 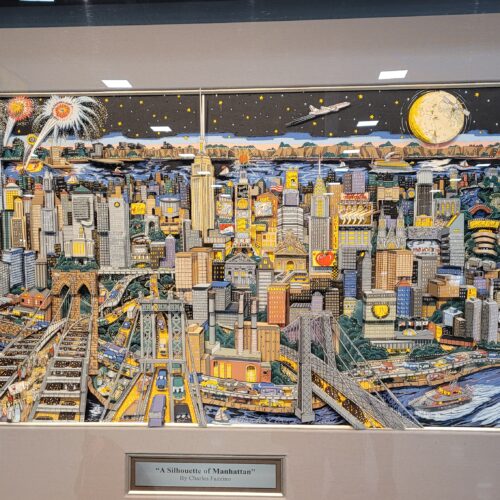 "Stay away if you can"

Not Verified | Horrible, horrible experience. The flight was smooth and even arrived a few minutes early. But we had to wait 45 minutes for a gate to deplane, and then another hour for luggage to arrive at baggage claim. It’s just miserable. Stay away if you can.
1/10

"This place is a disgrace"

Not Verified | Me and my husband arrived several hours late from our JetBlue flight, from Mexico, because of a delay. We were in Mexico & were told by the attendants numerous times that it wouldn't be much longer, only 15 more minutes. Instead of telling anyone the truth they had us all waiting around for HOURS. This was along with numerous others. Finally we boarded & arrived at JFK around 11pm and were told by the rude attendant that there was not another flight until 9:30 am, because we missed our flight. We told her it was of no fault of ours or anyone of the many others who arrived late due to JetBlues issue. After telling her that we were waiting for our other flight from 1:40pm-6pm and that we had no where to go, she conveniently found a flight at 4:30am. Other guests were told the same thing and we're forced to book their hotel at the airport for the night. We then asked where we could go for the next several hours. She told us there was a lounge downstairs. When we got down there, there were already others sitting around, exhausted. We weren't there for long when the security guard told everyone that they couldn't sit in the lounge area, because they were going to clean it .. while all of us had no to go. My husband and I went back upstairs to find a bunch of people, families & small children, sitting, even laying all over the floor because nothing was open for anyone yet and there were no chairs. What is the point of having a large lounge area, with seating, when no one can use it? So now there are a bunch of customers just lying around, on the floor, exhausted, waiting for the gates to open. This place is a disgrace. No wonder why there are so MANY negative reviews. It's sad to see that Nothing is changing.
3/10

Not Verified | Rude airport staff. No consideration for passenger. No help when requested, no will to help. The agent at the TSA was not nice with my children and the agents were rude. They made us wait so long for an insignificant matter that we missed our flight. Very bad experience.
1/10

"The bags were sitting there for hours unattended"

Not Verified | I strongly believe there are very serious security lapses at New York JFK Airport. On Friday 27 Aug we arrived at JFK from an International origin as transfer passengers enroute to Washington DCA Airport. Our luggage was tagged from origin all the way thru to DCA. The luggage was off loaded from the aircraft and placed on baggage claim while we waited in line 2 hours to re-enter border passport control where only 5-6 agents were processing over 500 passengers, the employees handling the crowd could barely speak English and were extremely rude and unprofessional. Some airport employee placed our baggage at a transfer kiosk and left it sitting there unattended. There was an airport employee standing at a door doing nothing so we asked her why our luggage was just sitting there so long and she said someone would be there so we waited up to 30 minutes. The bags were sitting there for hours unattended because nobody would come and handle our bags and put them in a secure staging area for our connecting flight. We tried asking why and employees would just turn their backs and ignore us. We decided to take matters into our own hands and recheck our baggage at Delta Airlines Ticket counter. We just walked away from there with our bags and nobody said anything so there was “unaccounted for” bags now. After taking a tram and going up and down stairs to 3 different terminals we found an employee that placed our bags onto the incoming baggage belt where we hoped it would find its way to Washington DCA. We then took more trams to a shuttle bus which took us to another terminal where we went thru an absolute chaotic security without any instruction people were yelling pushing and shoving running and our Delta flight gate changed 3 times and was 2 hours late departing. Delta was late on our first flight and lost our bags at JFK and we got them 2 days later overseas while on vacation. It is impossible to navigate JFK because there are no maps and simple instructions for foreign passengers, you must ask one of the extremely rude barely English speaking airport employees who can’t explain the complexity of finding your next terminal. You will have to run everywhere because transfer is so difficult and time consuming and information is unavailable. This airport is also dirty, smelly and worn out old. I would be willing to pay much more money to avoid New York all together for my next International Flight but it is so hard any International flights in the central USA.
1/10

"There are no restaurants or food service"

✅ Trip Verified | Departing from terminal 7 on LOT. Flight delayed 4 hours, must wait 2 hours outside Security until check in. There are no restaurants or food service, one broken vending machine and one filthy restroom.
10/10

"most importantly he actually found my purse"

✅ Trip Verified | I left my purse on the flight, and ran back to the airport to get it. There was nobody at Delta to help me and I was so scared because all my identification, medications, and my last paycheck were all in that bag. I was desperately looking for help. Then the sweetest man, an agent who checks boarding passes right before TSA, helped me. He was patient, calmed me down, was quick, efficient, and most importantly he actually found my purse. I know I got really lucky because it was the plane's last stop, but if I hadn't come across someone as kind I probably would have never gotten it back. I thank him and everyone who was involved in recuperating my purse from the bottom of my heart. You all could have chosen to take it, steal the contents, or just thrown it in the trash but everybody had a lot of good in them that night.
1/10

"lack of professionalism should not be excused"

✅ Trip Verified | Worst TSA! Negligent, rude, inefficient, dismissive. The manager of TSA (bearded and in his 50’s) was combative and immature to a point of disbelief. The lack of professionalism should not be excused.
1 to 10 of 497 Reviews