"the policeman at the check point was very rude"

✅ Trip Verified | As a business class passenger I was supposed to use the fast track lane for security check. But when I went there for the process the policeman at the check point was very rude and did not allow me to use the fast track. He even did not want to talk and was shouting at me probably because of my nationality. He also insulted me in front of the crowd. The airport authority should at least keep some literate people at these important locations especially for the business travelers.
1/10

"I have never seen such a horrible place in my life"

✅ Trip Verified | I have never seen such a horrible place in my life. You better avoid Kuwait Airport and Jazeera Airways unless you want to see how hard life can get. Here are some of the examples I faced yesterday. 1) There are thousands of passengers, but the Airport has space only for a couple of hundred travelers. 2) The Airport smelt horrible all through our stay in the airport. 3) There was no sign to guide us where to go where. It was utter confusion. We followed transit-marking-line (drawn on the ground) and entered into a small hall where already it was 2-3 times full. 4) We waited in the hall, standing for 20 minutes, and there was nobody to inform us where to go. Our Hyderabad flight was at 6.55pm, and it was already 6.40pm. After a long wait, somebody came and told us to go to B2. 5) We followed a narrow hallway to B2, but we were stopped at the front gate for the next 1 hour. There was no water, no food, no guidance and no toilets. 6) There was only one luggage screening system, and everybody had to go through that. People were everywhere, and there was no line. The crowd was formed. There was nobody to control the masses. It was just like a feud. 7) After prolonged pushing, a person tries to push everybody back. An older man (I believe from Lahore) commented something (which I did not hear), and the airport person got angry and pulled him into a room and called the police. The so-called airport official was so angry, and he heavily abused this older adult from Lahore. It was more like a street fight (one-sided). 8) The official was so angry that he closed the gate for more than 20-25 minutes due to this feud. 9) In the meantime, many influential passengers were going inside (without following any line). 10) Some of the so-called white scarf influential passengers did not even scan their briefcases. I was astonished by this glaring security exception. 11) And now, a new supervisor comes and pushes everybody back to make it a single line. They kept their hands on the people to move them (man-handling). 12) Lahore flight was announced at gate B1, and Hyderabad was at B2. But they did the boarding, vice-versa.
1/10

Not Verified | Extremely unprofessional and slow boarding. Plane was Boeing 777-200 LR seating over 300 ppl. Second security check before boarding puts passengers in a hall that was too small - seated only half of the passengers. Instead of getting all passengers ready, we had to wait for the plane to open for boarding, for the hall to clear, before they started getting the rest half of the passengers through the security scans. Plane to Doha was late: for ppl in Kuwait, Doha is a transit point, thus many had connections. We ended up leaving one hour late. Extreme lack of organization and simple calculation of passengers versus seating of the pre-boarding hall. Happens every single time. Avoid at all cost. If any of the managers are reading: Keep track of late departures, ask yourselves the 5 Whys, and make some improvements, right now you’re beyond ridiculous and embarrassment!
2/10

✅ Trip Verified | It’s the small thing of bottled water which really made my blood boil. I arrived in Kuwait for a layover on my trip from Dubai to London Gatwick. Before boarding in Dubai I bought a bottle of water. I could only have bought it after security. Arriving in Kuwait I was told to throw it away when I had to go through my first bag check on transfer. I then had a second bag check as I entered the duty free area. I bought a bottle of water which I did not open. When I arrived at the boarding gate I had a third bag check and was not allowed this new bottle of water in the lounge with no possibility of purchasing another bottle for my 6.5 hour flight. I cannot understand this. It’s an absolutely ridiculous system. Completely ridiculous. ‘We have to obey the rules’ staff told me. Crazy procedures.
1/10

Not Verified | I've never liked this airport and only just taken the time to comment officially. The facilities are horrible, the staff service is the worst I encounter (I usually travel 50+ times a year) and the waits are deplorable. This is the only airport where they ask you to not only take your iPad and laptop out but also turn them on which slows down the process. As a frequent business traveler who can last for 3 days with carry on luggage they confiscate my deodorant every time - the only airport who does this. The staff are rude, mis-informed and have zero customer service skills.
1/10

"behaviour is so appalling"

✅ Trip Verified | Staff behaviour is so appalling! No one was ready to speak with me and the staff at airport and airline was literally turning their faces away when I was looking for people to help. My child has anxiety issues with Autism and he was screaming and crying as I had to make him stand and wait in the que. This was not a failure of providing the stroller to us but sheer ignorance and laziness by the staff as even after checking twice they said, they will give it and they didnt.
1/10

"Jazeera terminal was one of the worst"

Not Verified | The Jazeera terminal was one of the worst. I had to travel to Jeddah from Hyderabad via Kuwait. Terminal was very small. Only 3-4 gates with minimal seating arrangement.
1/10

"avoid this airport at all cost"

✅ Trip Verified | Had high expectations as I've never been to Kuwait before and have heard so many good things about it. I was transiting between Saudi Arabia and London and had my vintage 1940s umbrella taken from me at the security check with no previous warning. The airline had no problem with umbrellas as I'd already flown with them and umbrellas are actually allowed on board according to their website info. The security were rude, incompetent, couldn't even speak or understand English and had the gall to ask me if I could speak English. The majority of the airport staff were policemen giggling amongst themselves then acting like brutes when interacting with passengers. I went through multiple workers before I managed to get a member of staff from Kuwait Airways to help. She said I could reclaim my umbrella and she would be able to tag it and check it in with the baggage. When we got to the security check we were met with an imbecile of a security worker who wouldn't stop lying to me. After explaining the situation to him he looked into the bin that my umbrella was carelessly thrown into and asked me if it was black. When I responded in the affirmative he said it had already been taken to the disposal area. How would he know what it looked like if he hadn't seen it in the bin just then? When I told him to give me it and let me check it in, he said he couldn't do that because there wasn't enough time. I told him my flight was in 4 hours there was plenty of time, he said that 4 hours is actually too much time and were my flight in an hour or less he'd be able to let me check it in. I'm not sure what logic (if any) was applied here because I've not been able to make sense of that claim. At this point one of the Kuwaiti officers was trying to usher me out so he could get back to the office and chitchat with his buddies. I tried to complain on the airport's website, but the complaint form they provide doesn't even have a 'proceed' button. I contacted Kuwait Airways via email and even spoke to a representative of theirs in London to no avail. Absolutely avoid this airport at all cost. Who knows, maybe they'll confiscate belts and shoelaces next.
5/10

✅ Trip Verified | Well it started easy and smooth I went to the new Terminal 4 in Kuwait and the difference between them is that the old airport allows all airlines while the new one only allows Kuwait Airways. I like the new airport it's nice there were 2 Starbucks one opening down I think these 2 might be temporary until the large Starbucks opens. I like the new airport, I definitely recommend it. 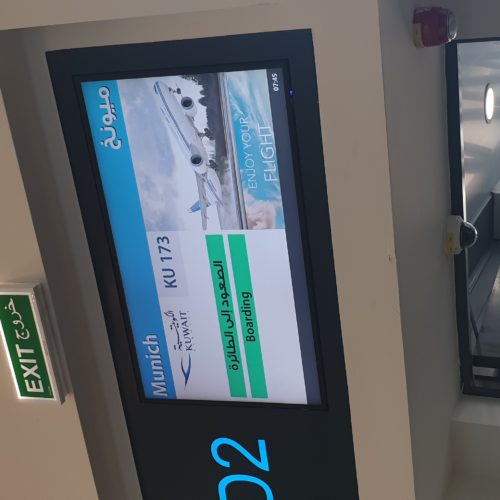 ✅ Trip Verified | So it was a short 2 hours at Kuwait Airport and it's good it's not a angry mob and its very easy to get to my gate. Duty frees and 2 Starbucks were there and they will open Pizza Express, Shake Shack, Raising Canes and Mcdonalds. I went to the terminal 4 not the original airport. 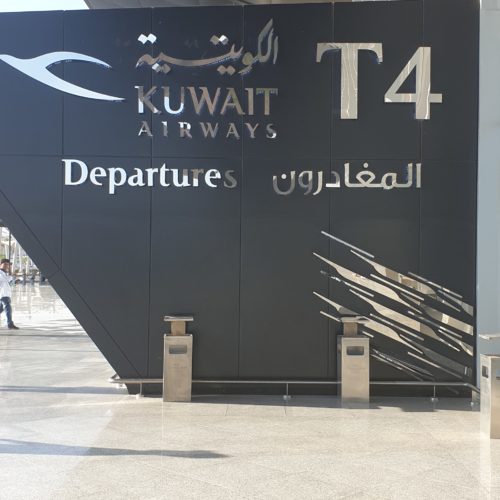