✅ Trip Verified | Abhorrant. Avoid at all costs. The lack of infrastructure is staggering to a level that defies common sense. A single scanner at the entrance, a single visa recovery point, a single working booth at migrations. Expect hours of queuing except at the quietest times. For an hour long flight (Kuwait-Qatar) you must go through scanners three times, which doesn't make sense at all, and at each point only a single scanner. People started going through the last one hour in advance, yet my flight was delayed more than half an hour because everything was so slow. The personnel is blatantly rude, inept, slow, and careless. They don't know the difference between an ereader and an iPad, and call a supervisor to check it at every scanner point. They don't understand English and babble gibberish if you ask anything, or plainly shout at you. In a country under the rule of law their verbal and physical behavior would land some of them in jail. The toilets, of which there are just a handful, seem from a suburban train station in a third world country. Pick any another airport at the middle east for all of them (say UAE, Qatar, Oman) are better unless strictly necessary.
1/10

"a nightmare when you have little ones with you"

Not Verified | As much as I love Kuwait, I absolutely hate the airport we have. No, I'm not talking about the selection of duty-free stores or the number of restaurants and cafes that we have. I'm talking about how inefficient the whole process is, I'm talking about the unfriendliness and negative work ethic of the staff, herding passengers like cattle from line to line while barking rudely to anyone who appears to look like a poor maid or laborer. This is of course, unless you have the privilege of being a Kuwaiti, because oh, in that case, you can jump, hop and skip through any queue and no rules apply to you. An airport is the first impression a country makes on a tourist. There's no point spending millions of dollars on a new airport, or even renovating parts of the old one if the service is just as poor with the same indifferent attitude. We just arrived back from our trip to Thailand and though we've been seeing the service at the Kuwait Airport degrade with each passing year, this year just topped it! Our flight to Phuket via Oman and Bangkok was at 10:30 pm and like good travelers, we arrived with more than 3 hours to spare. The queue to check in our luggage was chaotic with passengers forming their own queues all over the place and despite checking in online, there was no separate counter. On spotting a suited staff (a friendly expat I should add), I approached him and told him that I'd checked in online and mentioned that I was traveling with young kids. He quickly opened up a separate queue for those already checked in and we breezed through the first hurdle. Yay! Quite proud of ourselves, we walked out happily only to have our hearts sink when we saw the queue for the customs clearance. It snaked out almost all the way to the front door! Only once we got near the front did it become apparent just why the queue was this long. For the entire "Other Nationality" economy class passengers, there were only two counters open. What!? Seriously, what is the point of having brand new customs counters if they aren't used? There were at least 3-4 counters open for GCC Nationals and Business and First Class passengers though. Good to know that their priorities are in order! We also had to get our carry on screened and though there were three x-ray machines, only one to two of them were open at any one time. Also, the officers in charge of screening the baggage were just on their phones or talking amongst themselves. If they're not going to do it properly, why bother in the first place? Having finally finished with customs, we thought we were done with queues until we went downstairs to our gate to board our flight and were met with yet another giant queue to again screen our carry on baggage before boarding the plane. And get this, for the entire flight, there was just one x-ray machine. How ridiculous is that? Despite just making it onto the plane in time, there were still passengers to clear each hurdle and our flight ended up leaving an hour late making us miss our next two connecting flights. Definitely, a nightmare when you have little ones with you.
1/10

✅ Trip Verified | Recently in April 2019, we flew with Kuwait Airways to Jeddah from Heathrow via a transit at Kuwait International Airport (KWI) - Terminal 4. The security staff members at Kuwait airport are rude and extremely unprofessional, my husband was threatened just for asking to speak to a manager because they refused to allow us a 500 grams of sealed honey jar that we had purchased from duty free shop at Jeddah airport, and the jar was inside the duty free shopping bag. My family with young children were left terrified when their security officers took away our passports from us and my husband was taken to an officer room in which he was asked to apologize for asking to speak to a manager. Our family passports were only returned after my husband was forced to say sorry to the person whom he had asked for his manager details. So bear in mind at Kuwait airport it's considered a crime if you ask someone for his/her manager details. We will never use Kuwait Airlines again and we will never go via Kuwait Airport. Kuwaitis may be good people but the staff at the airport have not left me and my family with a good image of the country.
1/10

Not Verified | New security equipment installed but nobody has a clue how to use it, so they check every bag, down to your last pen. Then just when you think it's all over, the check your bags all over again at the gate. Total mess with flights running late or even cancelled.
1/10

✅ Trip Verified | This is the world's worst airport, I was flying from Colombo to London via Kuwait, between the transit lounge and departures I had to go through three security check points and had my hand luggage scanned, they ask us to take out the laptop, send through the scanner and after scanning we have switch it on, staff are very rude, all are expatriates speaking their own language, unacceptable , it is so much hassle for the passengers, I would never again visit this airport or the country. This is the first and last time to this airport
1/10

Not Verified | Absolutely abysmal. Do not connect via Kuwait. Our flight was delayed with no prior warning. No one in the airport to consult. No screens showing which terminal to go to or how to get there. Avoid at all costs.
1/10

"This is the worst airport"

✅ Trip Verified | This is the worst airport I ever had. The staff at the check-in counter was very rude. I was flying via KLM to Bahrain. The airport was very crowded, arriving and departing passengers are meeting at the same place as there are bo designated walkways for arriving passengers. On the way to the waiting area, they have to scan again your hand carry luggage at the boarding gate. One will check your boarding pass before scanning, security will ask to remove shoes selectively. I would understand if they do this to all passengers but apparently not. They ask to remove laptop and ipad and it goes to the scanner. After scanning they will ask to switch it on. Then the security will check again the boarding pass. There is too much hassles in this airport. I would avoid this airport in my future travels and this is considered to be the worst airport I have ever been to. 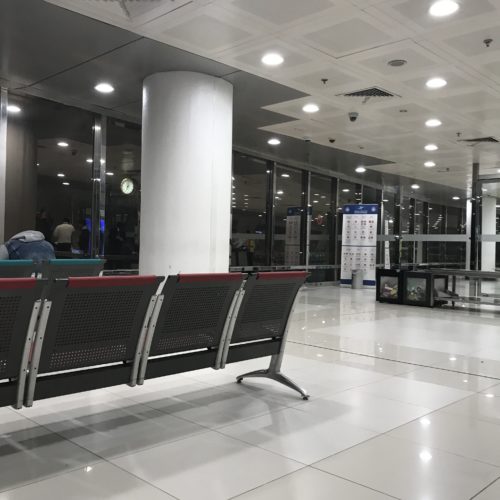 ✅ Trip Verified | I travelled for the first time with my wife via Kuwait Airways and would say that it was the worst experience of my life. It seemed like a never ending nightmare which will haunt me for some time. I am not sure if someone will even look at my complaint but thought that I should at least bring this to your attention. Major gaps in communication since I booked my tickets for the first time. Staff is non professional and rude. Cleanliness is zero especially the toilets at the Kuwait airport. Non compliant staff and they just misguide you about everything at the airport. It is chaos and I think the management needs to overhaul otherwise there might be no passengers left to fly.
5/10

"None of the piers were in use"

Not Verified | Arrived at new T4, snag was we parked in the airfield and bus ride to the terminal took about 10 minutes. None of the piers were in use. Passport Control/Visa all in one place and relatively quick. Immediately beyond is hand luggage scan and then Baggage Reclaim and out past Red/Green Customs. New terminal all on 1 level but no taxis - there are signs but no actual taxis, there is a limousine service which is the only way to get out if you are not being picked up! Currently only used by Kuwait Airlines for some flagship routes but is clearly not fully ready for business. Most other carriers use T1 which has it's own charms depending upon the time of day you travel through it.
1/10

✅ Trip Verified | Terrible airport, terrible staff. Would not let me retrieve my baggage, claiming they would transfer to my next flight - nothing transferred and now they claim my bag never arrived in Kuwait and they have no record of the claim ticket I have for the bag. They are terrible, do not fly through or to Kuwait airport.
11 to 20 of 56 Reviews