Not Verified | There appears to be issues with gate assignments at this airport. My flight had to wait an hour for a gate after landing and an hour to take off when I left. Upon leaving there were also four gate changes.
1/10

"nightmare of an airport"

✅ Trip Verified | Complete disorder and confusion. The staff standing by the lines gave me wrong information. Many staff standing around in groups socializing instead of helping all the people around them that were obviously confused. Everyone around me at the airport was complaining about the disorganization (it wasn’t just me). I saw many lights on signs not working and the floor and waiting area were filthy. I couldn’t wait to leave this chaotic nightmare of an airport.
1/10

"area is so disorganized"

Not Verified | Arrived on the evening of June 21 and then again on July 10 for the return part of our flight. Arrived on Alaska Airlines, airport personnel were very unhelpful trying to find our way to Icelandair. Upon return on July 10 one airport person was very helpful to find the Alaska air counter We were sent to terminal C which is a horrible place to spend any time at all. There is one bathroom in the terminal it’s filthy and the area is so disorganized it’s hard to believe this is in the United States even worse in Boston.
1/10

"Filthiest airport I’ve ever been in"

✅ Trip Verified | Filthiest airport I’ve ever been in! One look at the floors tells all. Vinyl, broken seats smell like unwashed masses. Massive dirt balls 3-4 in circumference roll in entry doors. Never mind the dirty bathrooms. Pathetic in comparison to other busy city airports! 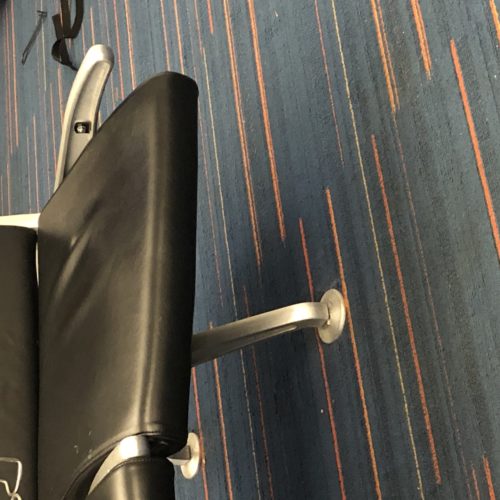 "freezing my butt off"

✅ Trip Verified | I am sitting in Terminal C right now freezing my butt off. It's 73 degrees outside and approximately 58 inside. Why? Do I need to remind you that its the accumulation of these types of bad decisions that will lead to the demise of our planet. Please get your act together.
6/10

"airport has a lot of room for improvement"

Not Verified | This is our first time to use Boston Logan Airport. We’d been to several other airports and we feel that this airport has a lot of room for improvement. The signs are not very clear. Even the signs going to the airport are not straightforward. The $5.00 cart rental fee is too exorbitant. We simply do not a pleasant experience here and will try to avoid this path as much as possible.
3/10

Not Verified | Chaotic! Very poor information boards. Announcements for adjacent gates made at the same time so nobody can hear! Ladies’ toilets by C31 a disgrace - dirty, doors broken. What an awful airport.
10/10

✅ Trip Verified | I returned from a long trip and went to my car at economy parking lot. After I got out of the lot, I inadvertently hit the curb right outside it and I got a flat tire. I tried to move a little bit and it was impossible beyond a few meters away. I called AAA and they told me I had to talk to Massport. Within minutes, a policeman came and he had notified Massport towing trucks. He waited with me until the truck came. I thought I had a spare tire and a jack and all, but it seems someone had stolen them from my car at some point over the past few months, and I was unaware of it. The tow truck then towed me to central parking and I waited for my AAA to show up. As I was waiting, several of Massport's tow truck people passed by me and stopped to help and to offer help. Two in particular actually went out of their way to try and get me a donut tire to use, and they tried it on but it just was too big. They waited with me and helped me out a great deal until my AAA truck came. I am very very grateful to these wonderful people.
1/10

"there was a bottleneck situation the other day"

✅ Trip Verified | People arriving from abroad have to go through customs procedures and security checks, which can take an hour or more at American airports at peak times. Logan Airport seems at first sight to be well organized for this - staff to direct you, electronic devices meant to speed up certain procedures, etc. However, there was a bottleneck situation the other day because 3 flights arrived at more or less the same time, and so it took all of 2 hours from the time I left the aircraft to the time I left the airport. This in and of itself is unacceptable, especially considering that it was mid afternoon and only about half of the posts were open. But even worse was the fact that many of the people in line with me were getting very nervous because they were afraid they would miss their connecting flights. However, when they asked if they could go through first, they were told it wasn't possible because everything had to be done on first come first served basis. The argument was that people who did not have connecting flights would protest and would never be served because in the meantime other flights would arrive. Not true because by the time I got through there were very few people still waiting in line. I for one would gladly let someone who is in a rush for a good reason go before me and I'm certain any sensible person would do the same. Other airports have staff available for the very purpose of directing people who have little time to catch their connecting flights. Why not Logan? It's a question of courtesy and common sense. And it's especially important here because for many foreigners this is their first experience on American soil! A fine welcome!!
3/10

✅ Trip Verified | UBER and Lyft driver’s doing “pick-up” jobs at the airport cause signifant traffic delays, especially at Terminals B and C. There is only one way, in and out of Terminal B and C, so drivers (and passengers) need to be considerate of others to keep traffic moving. Taxi driver drive with the flow of traffic. UBER and Lyft drivers cause the traffic because they do not follow any rules and block traffic. I fly into Logan weekly and tonight is a perfect example of UBER drivers blocking the road so no one could drive out of the terminal. (200 were waiting to leave Logan and it was not a busy night at Logan. Thursday evenings are worse). It’s chaos, insane and very inefficient. For people arriving into Boston, it is a terrible first impression of the city. As a solution, restict UBER and Lyft drivers from Terminal B and C. Only allow pickups at Terminal A, Terminal E or Central Parking (like the old days with Black Cars and limo’s)
21 to 30 of 150 Reviews