"kept telling me they reimbursed me"

✅ Trip Verified | We arrived late to Athens because of a delay in Toronto, and rushed to get to the Sky Express gate for our next flight to Santorini. We arrived with 30 mins to spare and after consulting with her colleague, the attendant determined it was too late for us to board and we would need to buy new tickets for the next available flight. Later we were told via email that we needed to be there 20 mins early but we were 30 mins early! Either way, we purchased new tickets and were given contact info for Sky Express to receive a refund of our taxes due to the missed flight. After our trip ended, I contacted the airline and provided all of our info and was told I would be reimbursed within 30 days. Well 30 days passed, then 60, then 90, and I was following up regularly via email but NO responses from anyone. Finally I called the airline and was told they reimbursed me in August to a card ending in 6237 but my card ends in 7237 so there is a mistake and I did not receive my reimbursement. They kept telling me they processed it and there was nothing further they could do. I provided proof of my purchase using MY credit card, and screenshots of my credit card statement, and they still kept telling me they reimbursed me (but to a card that I don't own). Finally they sent me "proof" of reimbursement, which is totally laughable, because the "proof" showed that they reimbursed a MASTERCARD in my husband's name ending in 6237 (which is not his card, and he only has a Visa), meanwhile it was MY VISA that was used to purchase the tickets - so how can you reimburse someone else who did not make the original purchase? What sense does that make? and to a card that doesn't exist! This has fraud written all over it and I will not rest until they are caught. It isn't even about the money at this point.
1/10

✅ Trip Verified | I made an error with the date on booking my flight. I contacted the airline immediately and they had unacceptable change fees and a charge for calling their customer service line. They do not answer comments on their customer support line and offer no support whatsoever. Frankly I would recommend you avoid this airline because of their total lack of customer support and empathy.
1/10

"denied to embark, due to overbooking"

✅ Trip Verified | Very bad company. Three of us have been denied to embark, even with boarding passes in hand, due to overbooking. No proposal for another flight and lost of part of holidays. We are waiting for reimbursement and compensation since august.
1/10

"ever choose this company again"

✅ Trip Verified | They changed our department time 3 days before departure and when I called to complain (because I had made arrangements for us to be picked up at the airport) they didn’t even said that they are sorry which is the least they could do! Of course they did not help us at all and they were very rude. After that incident we went at the airport we did our check in and all we went in the airplane and when we sat they told us that there was some kind of issue with the airport and that we would have to stay in the airplane for an hour and a half and then we would leave. (And have in mind that they changes our departure time 3 days prior) we were all very disappointed and very angry. They could at least tell us that there would be a delay and let us at the airport and not in the airplane doing nothing. I would never choose this company again it is not worth the money and the costumer service is absolutely terrible.
5/10

"it’s about the principle"

✅ Trip Verified | Travelling from New York to Athens and from Athens to Chania I had an extra luggage that I knew I will be charged no problem. The girl charge me by mistake for 2 extra luggage it wasn’t enough time to go back for my refund because my plane was leaving, so I email the company. They said it’s not refundable. For what for their mistake it’s not fair. It’s not about the money it’s about the principle of the Situation. 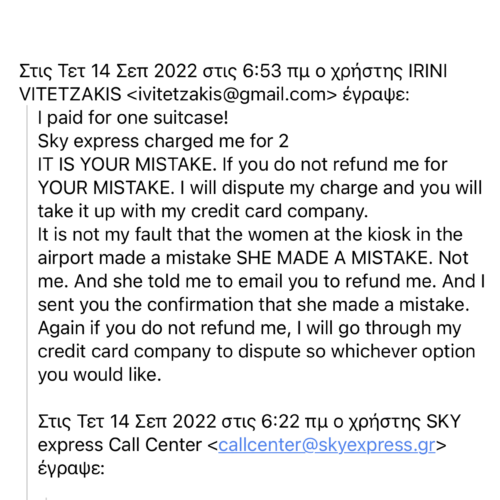 ✅ Trip Verified | Worst experience ever. The policies of this airline are absurd and their actions make no sense. Get ready for delays and misunderstandings if booking with them. Fast lane, priority boarding etc is just a scam, it’s nonexistent literally they’re just stealing your money. In my flight ticket priority bag handling was also included, however my suitcase arrived belated and also broken. Their customer service is non existent as well, i would send them emails and messages which they never replied to. On instagram they would read my message and never reply as well.
1/10

"charge me more for our bags"

✅ Trip Verified | My new fiancé and I arrived to an empty airport for our flight back home after a beautiful trip to Santorini. We walked up to be checked in by the available ticket agent who just looked at us in awe that we were even in Greece. She never called us over, so we took the initiative to walk up to her since she was the only ticket agent available. She never greeted us. She proceeded to charge me more for our bags even though my original purchase included our bags on our first flight to santorini with the SkyJoy package, which means nothing by the way because their is no priority class on these flights and people were able to move wherever they wanted to during the flight. She refused to give me a rundown of the reason we were being charged more. She refused to give me her name (which she forgot she wrote on my receipt). She printed tickets without a gate. She gave us no direction as to where to go. 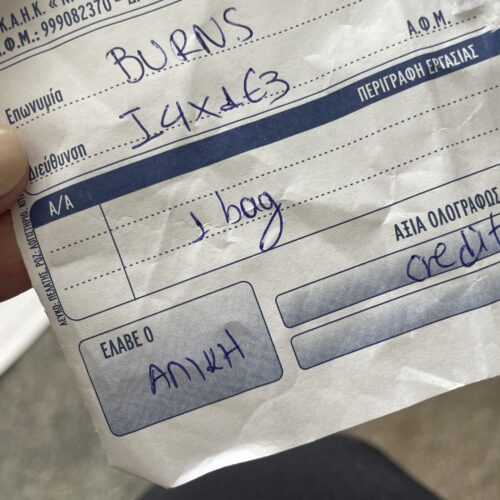 "No one was there to help us out"

✅ Trip Verified | They lost my luggage and I got my luggage after one month. They told me they will reimburse me but after I sent them my information, they ignore me and my emails. It's been 2 months since I am waiting for my reimbursement. When I lost my luggage, I called them and emailed them so many times. No one replied me. Because of this airline, my trip to Greece was ruined and because of this airline, I will never ever go to Greece. I never ever had such a bad experience with any airline. No one was there to help us out. Our flight was delayed too!
1/10

"requested a refund for the cancelled flight"

✅ Trip Verified | We were scheduled for the flight to Zakynthos from Athens on flight GQ420 on July 12, 2022. Though we were able to check in (online) the night before and showed up 1-1/2 hours in advance of the scheduled 9:50 AM departure, we were told the flight had been cancelled. The service representative seemed a bit confused at first telling us it left that morning, then told us the flight had been canceled and that we were emailed and were not entitled to a refund. Ww ere never notified of the cancellation or any alternative options! We had reserved an Airbnb on Zakynthos so we had to get there that day. Therefore, we had to take a taxi to a bus terminal, take a 4 hour bus ride to the ferry, then a two hour ferry ride to the island! We respectfully requested a refund for the cancelled flight to help recover the cost of the alternative transportation. They never responded to our emails.
5/10

"I paid 4 euro for priority luggage"

Not Verified | The flight delay 30 min and any of the ground staff inform us. Also was overbooked that means some of the passengers flown on the next flight. I paid 4 euro for priority luggage at Kalymnos and was the last luggage that came. The cabin crew was very nice and friendly. There wasn't variety on the aircraft only a biscuit and water of coffee for 1 hour flight.
1 to 10 of 64 Reviews