✅ Trip Verified | Osaka to Narita. Absolutely horrid experience. I initially had a two hour layover in Narita. The night before our return flight home to the United States I got a notification that the flight was delayed by 50 minutes.No idea. We wait.. no airplane... delayed 30 mins more .. at this point I’m not sure if I’ll make my flight. Finally the crew moved us to another plane that had been parked since before I got to the gate. Four hour delay is unacceptable. The worst part was that no one would help anyone who was about to be stranded, all of the desks at the airport or essentially closed. Half of the aircraft ended up having to stay in a hotel as well. they have no customer service and no way of complaining other than a robot names jess.
1/10

"pay for my small duffel bag"

✅ Trip Verified | Oita to Tokyo Narita. Should have read reviews here’s before booking this terrible airline. Paid for “upgraded” ticket which included 20kg checked baggage & seat selection. Day before flight, Jetstar website did not allow online Check-in. Link to upgrade my checked baggage (I wanted to add 5kg just in case) did not work. Arrived at Oita airport and tried to use check-in kiosk, denied again. When Check-in counter finally opened, the Jetstar agent insisted that I pay for my small duffel bag, which was 7kg. Apparently it was “excess” because I also had a normal-size knapsack. I thought it was excessively nit picky but it’s typical for super-cheap airline. The excess baggage fee was USD109. I understand the need to control cabin baggage when the flight is full but it wasn’t even close to being full (now I know why). Clearly, the fees are not going toward upgrading the shabby plane seats and no-frills cabin. And the long transit in Narita is at the bus-station-like budget-airline satellite terminal. Sent a complaint to Jetstar Japan via Twitter and no response. Lesson learned...pay extra for a real airline.
1/10

Not Verified | Was ready for a quick and cheap flight from Osaka to Sapporo on a busy three day weekend. I arrived at the airport to find that my flight had been cancelled and was told that there was no other available flight that day. The staff at the desk, though polite, not only flatly refused to provide an adequate reason, they also failed to provide any other service apart from a full refund or at best a flight on the next day. Then, to add insult to injury, they recommended that I call their customer service desk in order to find out more, using a fee-incuring line no less. A stunning lack of customer service and professionality. I shan't fly with Jetstar Japan again.
7/10

"check in was really intense"

✅ Trip Verified | Flying from Tokyo Nartia to Taipei. Arrived at the airport 2 hours in advanced, the check in was really intense. Only 2 staff member were working at this time, had to queue for one hour and thirty minutes before check in. Some JetStar staff arrived to help their colleagues but I was really nervous, with many other passengers, that I will miss that plane. But they succeeded to checkin everyone on time, they had no time to be friendly but nobody was asking for that at this time. So good on them for this even though it made me very nervous, they stayed very professional and pretty organized. An airport staff was checking the weight of every luggage on the line to speed everything up. The seats are not very comfortable and no inflight entertainment but I paid for it. The plane had just 20 minutes delay, which was acceptable for me.
2/10

"no staff indicating the status"

✅ Trip Verified | Kansai to Tokyo Narita. Flight was already delayed two days before. I am sitting here at 6.30pm waiting for a flight that was supposed to be at 1.55pm. If Jetstar cannot sustain their credibility they should not be operating flights in Japan. There are no staff here indicating the status.
3/10

✅ Trip Verified | Osaka to Narita. My luggage was 36.5cm wide. Their policy is 36. They charged for checked luggage because of only 0.5cm too wide. I understand rules and policies. But this was only 0.5cm. I should not have been charged. 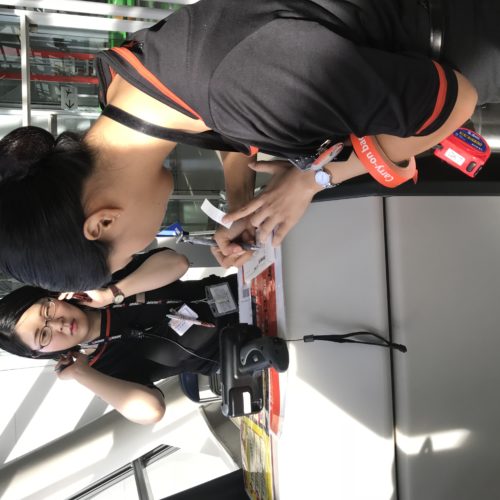 "forced everyone to pay extra"

✅ Trip Verified | Kansai to Okinawa. If you're into having a horrible experience and ruin your whole day if not whole week then by all means go ahead and book yourself a flight with Jetstar. Staff may find the smallest mistake with you hand baggage or check in luggage just to charge you extra. I saw how they did the exact same thing to me to at least 20 other people. The hand baggage cabins on the plane were practically empty because they had forced everyone to pay extra and check in their hand baggage. The seats are uncomfortable, no free water. You get what you pay for.
1/10

"they have no interest in helping"

✅ Trip Verified | Narita to Osaka. They change your flight and then it’s non refundable. Tried to talk to them and they have no intrest in helping. All they do is re-send the rules and regulations. Funny because when I was booking it said “flexible” and no charge for canceling or changing flight. When I called they said they’d issue me a voucher valid for 6 months. I told them I was leaving back home. They didn’t care! Worst airline ever. I have flown bad ones but this one takes the cake. Limited baggage. Limited help. No others langauge at counter. Slow
1/10

"many charges and booking fees"

Not Verified | Manila to Osaka. Do not book directly thru JetStar website. They have many charges and expensive booking fees as compared to Expedia. I called and chat with their representative after completion my first booking thru their website to ask if I can still cancel my booking since I found the same JetStar flight itineraries from Expedia for a much cheaper price inclusive of a carry on & one checked in baggage. They said my earlier bookings are plus bundle only and are non refundable nor cancellable and that they cannot match any third party pricing since my booking is already confirmed. I explained that my booking is 6 months away and I am sure there are still many seats available and I will still choose to book Jetstar same flights thru Expedia. I am frustrated to pay more than $100.00 for three passengers booking thru jetstar.com. Also, their booking fee is much more expensive at $30.00 as compared to Expedia for only $8.00 for all three passengers.
9/10

✅ Trip Verified | Tokyo Narita to Sapporo. I found Jetstar Japan to be a good option for Japan domestic travel. As a low-cost/budget airline there is a fee structure in place for most items beyond the initial fare paid, depending on the package purchased - baggage (checked and carry on), seat assignments, beverages and food, etc. There are also strict weight limits in place for baggage, again both checked and carry on, but in-line with other airlines of this type. (In the Japanese domestic market think Peach and Vanilla.) If you can accept the carrier is not full-service, like ANA and JAL, and is a budget option, right down to the terminal facilities at certain airports, then the trade-off in fare paid will be acceptable to you. On this trip I found a short line for baggage drop at Terminal 3 at Narita Airport, agents who spoke fluent English, which was appreciated, and proficiency in performing their duties. The walk from the check in area to the gate was long, probably 1,200 meters, so be prepared for that if you have mobility issues. This is a budget experience and Terminal 3 at Narita reflects this. Once you pass security there are virtually no airport amenities though there were free charging stations, which were appreciated. At the gate our flight was boarded quickly, professionally, and on-time. Staff announcements were in Japanese and English. One thing I noticed on another Jetstar Japan flight at the next gate, the staff gave a warning that, due to volcanic ash, their flight may divert to another airport. After over 2-million miles flown I've never seen that done before and felt it was a courteous gesture. Back to my flight, once on-board the aircraft was clean and the crew friendly. Again, all spoke English, including the pilots, beyond that required for air traffic control functions, and two of the four flight attendants spoke it fluently. We departed 4 minutes early. The only negative aspect of my flight comes on board and that was the seat. It was uncomfortable, the reason being it had almost no lower-back support whatsoever. Even the legroom was fine, but the seat comfort just wasn't there. This is an area where Peach has Jetstar Japan beat. Other aspects of the flight were fine - safety protocols were carried out diligently and the crew were attentive and polite. Once on the ground at Sapporo the taxi-in was short, with our flight arriving 1 minute past scheduled arrival, deplaning was fast, and baggage was delivered quickly, within 10 minutes of arrival. Overall I found Jetstar Japan to be a good option and I would travel with them again. There was good value, as compared to the full-service airlines or the train, and that was my main reason for flying them. If you can accept this is a budget experience, and the price reflects such, you will be happy. In regards to safety and in-flight crew attentiveness, there was little difference from a full service airline. If, however, you desire better airport amenities, more personalized service, better operational integrity; for example, the ability to recover after a cancellation or irregular operation, you may find a full service carrier more appealing, but at a price. In the end, it's a value proposition, and if saving money is your goal, Jetstar Japan is a fine way to go. If you're curious about the distinction between Jetstar Japan and Peach/Vanilla, soon to be merged into one carrier, Peach, I find each to be acceptable with both having a very similar product offering.
11 to 20 of 34 Reviews