"the worst ever trip I had"

✅ Trip Verified | I used this airline the first time for a long distance trip, it consisted of a 15h flight with one stopover on a small island before reaching the destination some 2h flight apart. on the way in, the aircraft changed route because of a medical emergency onboard. This resulted in a 4h delay and the cancellation of the trip to our final destination. the problem is that the English speaking passengers were never informed, they were in an airport with little to no English speaking personnel at night try to figure out which way to go. On the way back, after checking in and spending a morning waiting we finally realized that the flight was cancelled and that we had to go to the airline box to find out what next! In a nutshell two out of 5 working days wasted, connection flight arrangements wasted without compensation and much of our plans ruined as due to the lack of feedback we had little time to try and fix things. This was the worst ever trip I had. To top it up when we disembarked for the last time (ever) from the corsair craft we collected our luggage completely drenched in a foul smelling liquid so much that the contents needed to be washed several times. thank god there were only casual garments in the case.
1/10

"only sometimes gave communication in English"

✅ Trip Verified | I had intercontinental flight from Montreal to Paris. Crew only sometimes gave communication in English, mostly in French which not everybody speaks. Accept that, there is a problem with their website I couldn't the download boarding pass or send it to my email. In aeroplane touchscreen doesn't work.
10/10

✅ Trip Verified | This was the nicest transatlantic flight I've taken and I've been traveling to and from Paris a lot. It was a very large and comfortable plane. The flight attendant who took care of us was delightful. The seats were very comfortable and went almost completely flat for an actual sleep. The food was even decent. We flew back on Air Canada, which was fine but I was sad it was not the same as the way out. I will try to fly with Corsair on my next trip in October. Thank you!
1/10

"this flight was an absolute disaster"

✅ Trip Verified | The shortest flight of 50 minutes turned into a ruined vacation, thanks to Corsair and the incredibly incapable staff of Sint Maarten airport. First we were checked in and made to wait for hours, without any communication or information on our flight. When we finally made it to Guadeloupe we were 4 hrs late. Then half the plane did not get their luggage, and there were people connecting to Paris. No help from PTP staff either, they just showed us the number of lost luggage service on the wall and told us to call it. My bag is missing for three days now. Yesterday the plane arrived from Sint Maartens but my bag was not on it. This kind of company can only be evaluated on the fact that the pilots safely landed the plane and we made it in one piece, because everything else about this flight was an absolute disaster. 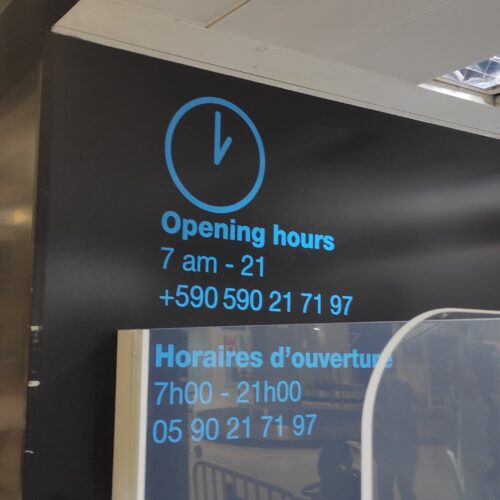 Not Verified | Paris to Miami. I was skeptical about flying Corsair after reading very mixed and less-than-stellar reviews, however, I was pleasantly surprised. Our trip (I traveled with my adult daughter) took place during the second week of March 2020 and the Corona virus drama. Check-in at MIA was uneventful. Since it was not a sold-out flight, we each sat in a different row. OK, so the airplane had the look and feel of a discount airline: narrow, thinly padded vinyl-feeling seats, however, legroom was pretty decent and the movie selection wasn't terrible. Food was pretty bad in terms of quality and variety, but I paid $400 RT, so I won't complain. Flight left on time and got us there ahead of schedule, so perhaps my bar is set pretty low, but I was a happy camper. For the flight back from Paris to Miami, we were scheduled for Monday, March 16 2020 .. on Thursday morning I find out about the whole travelers ban, and all sorts of red lights start flashing. I try to call Corsair to move the flight up and their telephone system is terrible. Prior to to leaving Miami, I tried calling them to ask a couple of questions and all the calls were greeted with a pre-recorded message from a call-forwarding system. A day later, all I got was a message that seemed to be recorded by someone at home. That was a very off-putting experience. Similar situation when trying to call their Paris number: calls were repeatedly immediately disconnected. Until the receptionist at the hotel suggested I call the "3917" number (how is a tourist supposed to know that?) at like $0.40 per minute. I was finally able to speak to a representative, who very courteously listened to our situation, took my information, and promised to call me back to let me know what could be done. An hour later she called to let me know that our departure had been moved to Friday, March 13, so Corsair gets major points there! Check-in at Orly went without a hitch and since we were only like 60 passengers in an A330, we had room to spare. This was a different A330, fabric seats and 9 abreast instead of 8 (narrow!). I moved up to the Economy Plus section .. besides a little more legroom and the fact that they recline a little more fully, I cannot understand nor justify the price differential. The seats are the same width and just as thin as those in economy. Flight left about 45 minutes late due (we were told) to immigration issues with a passenger. Cabin crew was attentive, polite, even happily served me an extra couple of lunches when I asked mid-way through the flight (I was starving!), and had bottles of water, juices and soft drinks on the galley counter to serve yourself whenever you were thirsty. So no complaints there. Overall, we got our money's worth plus plus. If you're looking for something of the caliber of Lufthansa Premium Economy or Business, then you will not be satisfied, but if you're looking for an inexpensive flight that gets you where you need to go, the Corsair probably won't disappoint.
6/10

Not Verified | Paris Orly to Pointe-à-Pitre. Overall good experience, decent food, friendly service on the inbound flight. Outbound all of the crew disappeared at night, difficult to get something to drink. Some security concerns upon landing in Paris. Crew didn’t check the cabin at all,two teens sleeping in lie flat position until touchdown! No one to wake them up, no one to remind them to put their seat in an upright position, never saw that before . Seats are ok but angled lie flat.
8/10

Not Verified | Miami to Paris Orly. We bought our ticket with Corsair because it was $500 cheaper than other airlines, and to our surprise the food and service was friendlier than American Airlines. The airline left on time. We had a one hour delay in our return flight, but that was OK. The seats are like other airlines and food was actually tasty (compared to other airlines) staff was friendly and spoke English. The inflight entertainment was very limited .. and some movies wouldn't work .. so plan to download some movies on your cell or tablet. We really have no complaints. We will fly Corsair again. Thank you for making a flight to Paris a good experience and an affordable one.
1/10

"will never ever fly Corsair again"

✅ Trip Verified | Paris Orly to Miami. This airline is terrible. I bought these tickets because they were cheaper and now I know why. First of all, my flight to Paris was canceled with no notification, email, phone call or text from anybody that works at this airline. I had to find out when I got to the airport. On the way home, we went through hell to get onto the plane. They charged us $200 for bags, which I tried to prepay for but I couldn't find any way to do so online. What kind of international airline doesn't give you any free bags? Then, we weren't allowed to take on any carry-on bags, really? We were harassed because we had too many bags (2 bags for 2 people), while people in front of us were going on with two to three bags a piece. A worker claimed that they were "laptop bags". I will never ever fly Corsair again. I will spend twice the money to fly any other airline that exists.
3/10

✅ Trip Verified | Paris to Miami. Unfriendly, only speak French and try to avoid speaking English. They don't care about their customers, you get very little to drink, no English films apart from 1 or 2 if your lucky. Out of date, Tv screens don't always work.
7/10

✅ Trip Verified | Paris Orly to Pointe-à-Pitre. Good service in business class. 2-2-2 layout. 12 business class seats in total. The outbound flight was quiet, so each business class passenger had two seats on his/her own. Food was good though I thought they served the 2nd meal a bit too late as I was getting a bit too hungry. Inbound flight business class cabin was full. Service was a bit more hurried but was still good and acceptable. There was only one toilet in business class and at times there was a wait as several passengers from premium economy were coming forward to use the business class toilet. I have no problem with this but Corsair should probably have 2 toilets in the business class cabin if it is too be shared with premium economy. The music albums in their entertainment system were surprisingly shocking. I did know any of the artists and I happen to follow French songs/music. For a French airline not to have any mainstream artists like Matt Pokora, Shy'M, Amel Bent or more seasoned stars like Julien Clerc (who happens to have connections with Guadeloupe as well) is quite surprising. 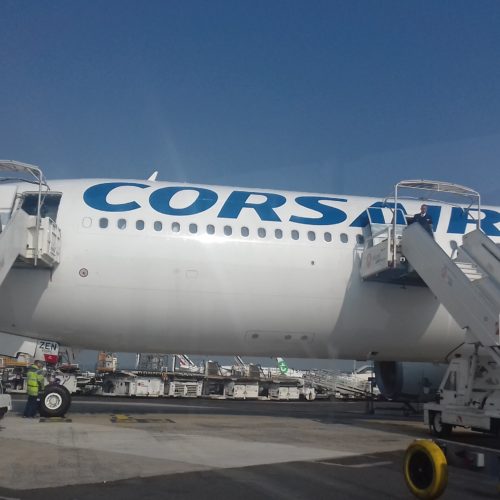 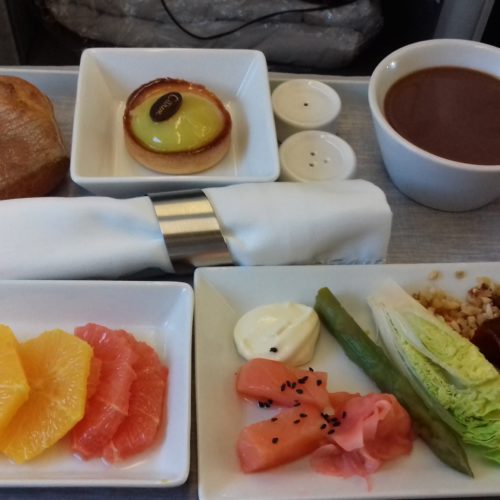