"waiting for my luggage for half my holidays"

✅ Trip Verified | Vienna to Larnaca. Austrian Airlines is a scam! Quick update to my last review of Austrian Airlines guys. So after waiting for my luggage for half my holidays, Austrian told me they would deliver my luggage today. As you can imagine they failed to honor that as well. ! And when I contacted them I was told I was to take a taxi at my own expense to come retrieve the luggage in the warehouse of the local agency in the middle of nowhere in a foreign country! There you have it guys. That’s how Austrian Airlines treats business class clients. Don’t say that nobody warned you.
1/10

"my luggage had not been loaded"

✅ Trip Verified | I have now been waiting for 3 days for this airline to deliver my luggage. I made the huge mistake of booking a business class round ticket from France to Cyprus for a small week off. Not only I had the displeasure of being informed upon landing that my luggage had not been loaded (although as a business class it was marked as a « priority luggage) but since then it has been nothing but impossible to reach their customer service. The Concierge at the hotel I am staying has been calling them non-stop for the past 3 days without success. I emailed them left and right and only to be greeted with non-sensical half-baked generic apologies from a no-reply automated server. And to top it off, not only this incompetent bunch has just ruined half of my holidays, but they do not even guarantee customers to reimburse them for damages to your belongings nor for additional essentials purchases.
3/10

"the temperature was set to 24"

✅ Trip Verified | Flew business from LAX to VIE on June 20. Cabin was warm when I boarded. Asked purser to cool it off. Yes no problem, once we get going it will cool off. After dinner went to bed, woke up half way through the flight sweating (was wearing shorts and a t-shirt and not using the provided blanket). Rang the bell asked what the temperature was set to learned it was 24. 24 is ridiculous. Austrian does not have individual air vents. After arguing with the purser for over 10 minutes she agreed to lower it to 22. I argued this was not enough and argued there was no way I could sleep in such a hot cabin. She then said, 'do you feel how cold I am? I'm freezing'. So because the purser is cold the whole cabin has to suffer in a sauna-like environment on a 10 hour flight. I've written letters to the standard customer service team, and have forwarded comment to the head of operations asking what the policy is for cabin temperature. 4 weeks later no response. Even though I think the products and service are generally better on international airlines, I simply can't trust then to have a reasonable cabin temperature.
1/10

✅ Trip Verified | From the moment I purchased my ticket for a business trip to Berlin and subsequent environmental fieldwork in Scandinavia, I've only run into problem after problem with this surprisingly incompetent airline. First, they informed me that my return flight had been canceled. After over a dozen phone calls over the course of a week - that is, sitting on hold for over an hour to never actually reach a customer service agent, someone finally picked up the phone and I managed to re-book another flight. Then on my outbound flight on August 6, they lost my luggage, sending me an email two days later that they had located it and handed it over to the delivery company. Three weeks later, after countless (unanswered) phone calls, emails, and online forms, I still hadn't received my luggage, only to find out that the delivery company (CLS Express - also impossible to get in touch with) had, in fact, never received my luggage. I was forced to purchase new items of clothing, shoes, and field gear (over $1000), as I had nothing with me for my month-long trip. I never received any feedback from Austrian Airlines regarding reimbursement or compensation of any sort. Furthermore, to say that the "Lost and Found" at the Berlin Airport is utterly useless is an understatement, as they - after making you wait in line for over 45 minutes - just refer you to the Austrian Airlines website to submit a claim. I had initially booked Austrian Airlines for my business trip thinking it was a quality company I could rely on. In my 15 years of international (and overseas) travel - both personal and business, with a multitude of different airlines - I have never run into so many issues with a single flight, or such disastrous customer service. Needless to say, this was my first and last time traveling with them. 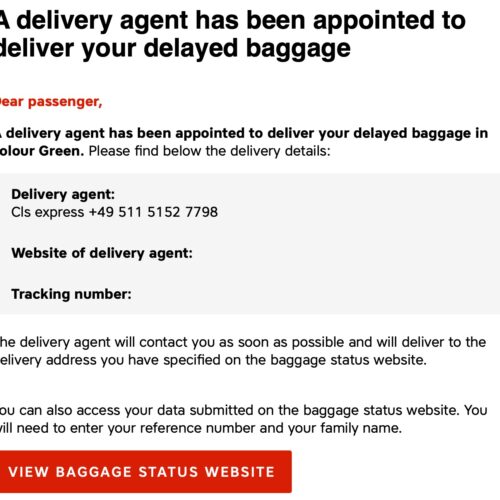 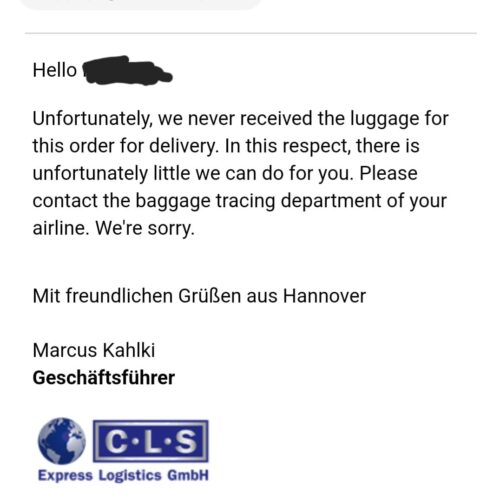 "our baggage didn’t make it"

Not Verified | Our flight from Stockholm was delayed with 10-15 minutes, therefore our baggage didn’t make it to our connecting flight - which is understandable. However, it has taken us four days to get any update about our baggage which was originally said to reach out hotel in 1-2 days. After calling a couple of times we got an update that our baggage where handed over to a currier and will reach us in 1-2 days (4-5 days upon arrival). They also promised to updated us by phone or email which they haven’t done a single time during these five days. They are not able to give us any information about the company who is handling the currier. I can not understand how this is not a prioritised matter to the airline?! They say that they will reimburse any necessary cost, which is reasonable, but not for over six days - since some things is not replaceable when abroad. This is horrible treatment, they promise things they can’t stand by and doesn’t seem to care.
1/10

Not Verified | Austrian Airlines made the return trip from Mallorca unpleasant for us with its one-hour delay to Vienna. In the plane, except for a glass of water, everything is paid for by card, including coffee, which the airline should offer free of charge for an hour's flight delay. As a result, we missed the reserved seats on the bus to Bratislava. We had to urgently look for an alternative connection at the airport in Schwechat. If we didn't find anything, we would be forced to take a taxi all the way to Bratislava, and Austrian Airlines would definitely not reimburse us for that. We will never travel with Austrian Airlines again, we would rather not go on vacation. They should improve to a great extent. Spiatočnú cestu z Malorky nám zneprijemnila letecká spoločnosť Austrian Airlines svojím neuvedeným hodinovým meškaním do Viedne. V lietadle okrem pohár vody sa za všetko platí kartou, aj za kávu, ktorú by mala letecká spoločnosť ponúknuť bezplatne za hodinové meškanie letu. Tým pádom sme zmeškali rezervovane miesta v autobuse do Bratislavy. Museli sme narýchlo hľadať náhradný spoj na letisku na Schwechate. Keby sme nič nenašli, boli by sme nútené ísť taxíkom až do Bratislavy a to by nám Austrian Airlines určite nerefundoval. Už nikdy viac s Austrian Airlines nebudeme cestovať, radšej nepôjdeme na dovolenku. Mali by sa zlepšiť a to vo veľkej miere.
2/10

"I would not recommend this airline"

✅ Trip Verified | The crew onboard was friendly and polite. The flight was on time and even landed before scheduled arrival time. I would give this airline company a higher rating if it weren’t for the meals they serve onboard. The food in the economy class is literally uneatable. The pasta penne was soaked in water with a disgusting sauce on top. The dessert cake as hard as a rock. My seat neighbors could not eat the food either. Considering the price of the plane ticket this is absolutely unacceptable! I would not recommend this airline to anyone unless you don’t mind bringing your own food onboard.
1/10

✅ Trip Verified | I had 2 checked luggages and the lady at check-in convinced me to check one of my hand luggages for free. She even offered to check in my daughter's stroller. Very kind of her. Thankfully, I kept the stroller because I needed it at the lay-over in Vienna. When I landed in Tirana, neither of my checked luggages came with me. The smaller luggage came after 2 days, one of the checked bags came after 3 days and the other big luggage still missing after 1 week. So, half of my daughter's clothes, all the supplements and anti-pyretics I got in case my daughter got sick during our trip, and all of my clothing and shoes, altogether with some gifts I got for the people we were going to visit, lost in that luggage. They tell me to send the receipts for the replacement items. What about all I spent to get the luggage and what I have in it? What about all the frustration and the wasted time to find clothes for us when we could be enjoying our vacation as we were supposed to? Our vacation was ruined and all what Austrian airlines customer support tells you is to file the missing luggage report online and the replacement items form online and that's all. The seats were so tight that you had no room for the arms. The meal was horrible. At least the coffee was good. I had to remind the flight attendants to give my daughter the crackers and the meal she was entitled to, even though she had her own seat paid at full price. This was my first time traveling with this company and it's going to be the last.
1/10

✅ Trip Verified | Their online system appears to have a massive defect which would cause a tremendous issue. After issuing the reservation that I have provided documentation of, I received a note that appeared to be a scam, claiming my credit card had not approved the charge for the flights I had received confirmation of. Checking my credit card statement, I was charged for the tickets. When contacting Austrian, they stated that having not been paid their system canceled my flights without notifying me. However, their agent then confirmed they had indeed billed my card and their charge was in fact being held against my card. Their agent admitted that they were utterly befuddled by the numerous errors within their system, the error in cancelling my flights, the error in stating they had not been paid, the error in not notifying me of a cancellation, etc. Essentially, she was polite, but could not sort out any reason for the numerous mistakes Austrian had made. I have blocked payment to Austrian and booked another airline as I cannot risk failing to reach Vienna for a business meeting. This should serve as a cautionary tale to check, verify, investigate, and take any other action possible to ensure Austrian has not failed spectacularly in what should be a trivial business transaction.
1/10

"lost my 4 luggage in Vienna"

Not Verified | It´s not the first time I have a luggage lost, but Austrian is by far the worst company I have to deal with. They lost my 4 luggage in Vienna and after 8 days, they are still lost. No information, No excuses, impossible to join by any means. The worst airline company ever.
21 to 30 of 681 Reviews