"Allegiant has cancelled the flight out to Bellingham"

Not Verified | Our family of five booked our flights on Allegiant from Oakland to Bellingham to bury the ashes of my father-in-law. About two weeks before the trip, our return flight was cancelled. We scrambled around, changed our plans to find and book a flight back on Alaska. Now less than two weeks from our planned trip, Allegiant has cancelled the flight out to Bellingham. What's the use of booking a flight, if they're going to cancel it at their whim?
1/10

Not Verified | I was supposed to fly out this morning from Los Angeles to Des Moines and Was at the airport an hour and a 1/2 before our flight was to leave. We stood in line to check in for 30 minutes and then when we got upstairs to TSA, Our boarding passes would not Scan. We had to go back down to stand in the line again to get our boarding passes printed out and by that time at time we had 30 minutes to make our flight and they wouldn't allow us to try and make it. They told us that we wouldn't be able to make the flights so we needed to call customer service and make other arrangements. We had almost 40 minutes to make it To the gate and the representative just told me to call customer service and figure out another flight. Of course now they won't clutter won't credit me any of the money I've bought my tickets with because supposedly it was my fault that we missed the plane. Why have us check in online if the barcodes won't be read at TSA? Why wouldn't they let us go try to make a flight? I will never fly Allegiant airlines again!
1/10

"I will never fly Allegiant again"

Not Verified | The worst ever. Canceled flights. Never received a refund two weeks later. Looks like they gave me a flight credit rather than a refund. Two weeks I've been trying to speak to someone. I've been on hold from 2-4 hours a day until I give up. I will never fly Allegiant again.
1/10

"This airline is cheap for a reason"

Not Verified | This airline is cheap for a reason. Terrible customer service and random cancelations. We had a flight from LAX to Reno and they just cancel it without any reason as to why it was canceled, so when we tried to call them all their phone lines are busy or not working. This company is a disgrace and should go down under. They never even helped us refund our flight, just get a voucher, which they still haven't replied about.
1/10

"By far the worst experience"

✅ Trip Verified | I was given a notice two days before my flight that my flight had been cancelled. I was willing to drive to another city, but Allegiant cancelled those flights too. I tried to rebook online but their website is glitched. I called Allegiant and was on hold for 7 and 1/2 hours and then they hung up on me before I even got to speak. I have not received a refund from them. I had to book a flight with a different airline out of an airport 8 hours away from where I live. I am now out money and have heard nothing from Allegiant. I have emailed them multiple times and have heard nothing. By far the worst experience I have ever had with any airline. I need my cancelled flight refunded to my original payment. I will never be flying Allegiant again. 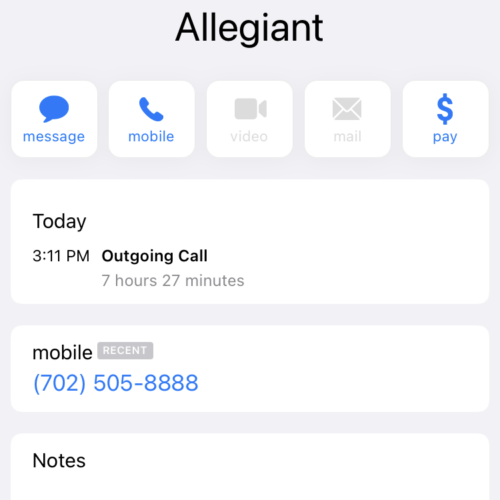 "the worst airline ever"

✅ Trip Verified | This is the worst airline ever. Please do not let the “low costs” make you use them. Allegiant Airlines delayed my daughters’ and I’s flight multiple times in the 3 hours leading up to the flight, then finally cancelled in and rescheduled it for the next morning. The very next morning the flight got delayed two more times. My husband was supposed to be meeting us on Thursday night using Allegiant and they once again delayed his flight multiple times. 5 minutes after his flight was supposed to leave they announced that it was cancelled and they would not be rescheduling or refunding the trip. They are blaming weather but what it amounted to was that there was a crew change in another city which put them behind schedule and ended up pushing my husbands flight time during a storm. You try and call customer service and it’s a 2+ hour wait to speak to anyone. AWFUL airline. Do not waste your time or money on them.
1/10

"try to keep the money I paid"

✅ Trip Verified | They cancelled my flight 10 days before. They try to keep the money I paid. Instead of having me wait on the phone for over an hour in order to cancel! Prior to calling, I was calling approximately 20 times. The phone line is always busy. There's no human who can take your call. I prepared my two confirmation numbers and the woman on the phone told me she needed the itinerary #s instead and told me to call back. Eventually, she was able to look up my itinerary using my phone number. She didn't ask for my phone number as an option instead wanting to hang up on me after I had wasted 2 hours of my precious time.
1/10

"not be flying with Allegiant again"

✅ Trip Verified | After cancelling my flight just a few hours before it was supposed to depart, I couldn't even dial into their customer support line. After a half hour of dialing, I finally got through and waited on hold for 2 more hours. First of all, they couldn't even tell me why my flight was cancelled. Then they went on to tell me me they couldn't help me reschedule my flight, even from another airport and I was forced to miss my sister's bachelorette party. I will not be flying with Allegiant again.
1/10

"was the worst travel experience"

✅ Trip Verified | I have flown all the major airlines for over the past 20 years. This was the first and list flight with Allegiant because they are cheap to Punta Gorda. Well you get what you pay for. They tout a sub-$100 flight however after all their fees, two round-trip tickets with carry-ons totaled $580. Other airline non-stops were the same price after all the nickel and diming from these clowns. Anyway, our flight was delayed 4 times. As we're driving to the airport, we kept getting notifications that the flight could move to an earlier time or delay further. After we board the plane, we see that the exit row seats we paid extra for were narrower than the other seats and the dividers could not be raised. We sat there for two hours while the pilot and co-pilot ran in and out of the plane trying to get a fuel pump to work. After two hours on the tarmac we finally take off for a 2:14A arrival time in Punta Gorda FL. During those two hours, not a single complimentary drink or snack was offered. They then came around and if you had their rewards card you could get a free soda. Otherwise you had to pay for a drink or snack. Without equivocation or hesitation I can easily say this was the worst travel experience in the last 25 years. I do not recommend this airline despite their touted savings. You WILL end up paying for it in in the end either monetarily, with delays, or discomfort.
1/10

"phone number has been busy for 5 hours"

Not Verified | Allegiant cancelled my flights less than two weeks before scheduled departure. Just a text message and an email, and no reasons given for the cancellations. The phone number to call for help has been busy for 5 hours!
1 to 10 of 1492 Reviews