"Never again for me"

Not Verified | Although having checked in online, for the baggage drop off you are being referred to kiosk / machine to print your own luggage tag, however most of these kiosks are out of order or suddenly run into an error while processing your request. After addressing this to the staff, you're just referred back to the kiosk and after insisting it won't work, finally being referred to a counter to drop off your luggage. At waiting your turn at the counter, the completely uninterested ground staff member simple wanted to refer me back to the kiosk again even after i've stated it didn't work. When i insisted she mentioned her counter was for checking inn cabin crew only, it was clearly she was lying as other passengers were checked by her before. In the end i got another staff member involved who told the lady behind the counter to actually assist me, after which my bag was checked in smoothly within 3 minutes. in the meantime many agitated passengers encountered the same frustrating experience! I truly don't understand why an airline would tolerate such rude and indifferent behavior. I've filled a complaint with AirAsia about this, but i only received an automated answer and the day after an email saying my case was closed (with no information given or anything). Flying with AirAsia? Never again for me.
1/10

✅ Trip Verified | We arrived 1.5 hours before our flight. Most of the kiosks were broken and we were sent to 4 different counters by the Air Asia staff. After we finally made it to the front of the line to drop off our bags they refused to take our bags telling us we were too late. The lady at counter V16 was extremely rude and began criticizing me for not hearing her over the speaker system about the last call for dropping off our bags. I explained to her that we did not hear her because we were being shuffled around by their staff from counter to counter. She replied by telling me that she didn’t believe that I didn’t hear her and continued to criticize me further. She took zero accountability for their incompetent staff. We ended up missing our flight and had to rebook another flight. Later I returned to her counter to get her name so I could file a report but the staff acted dumb and told me they didn’t know her name. I then asked to speak to a supervisor and was told it was his day off?! None of the staff members wear name tags. We will never travel AirAsia again!
2/10

✅ Trip Verified | I booked return flights Bandung - Singapore on 5th September 2022. I subsequently received an email from AirAsia on 15 October telling me that my flights were cancelled due to 'Operational reasons'. A promise is made for the refund to be made in 30 days. Now more than a month later, the refund is still in progress and no further advisories to enlighten me the status .... except from what I see in my account on their website. AirAsia has no customer service, no customer service phone number, not even an email address. All they have is an online chatbot named AVA, which is worse than useless. So you are on your own should any problems arise after you confirm your booking. Will definitely avoid flying AirAsia if I had a choice.
1/10

"Terrible experience all around"

✅ Trip Verified | The worst airline I have ever dealt with. They would not allow me to book a pre-flight bag and then charged me $80 for a bag that was slightly overweight (10 kilos). I had no choice but to pay as I was on the way to the flight. They were totally disinterested in helping. Terrible experience all around.
1/10

"Customer service is only a robot"

✅ Trip Verified | When the return flight was changed to another time, I had the option to change the date/flight to a new one. And I tried to do this, in the process to change it seems it doesn’t work and I get no confirmation email of the change. But so I find out they make up a new email which I have to register with on airasia website or some bullshit! So the ticket was changed and when it was time to check in for this flight, I also didn’t see any email to my own email and I lost my flight. Customer service is only a robot, and no phone number to customers support picks up the phone.
1/10

"Customer service is as low as it could be"

✅ Trip Verified | The worst flight! Of course was delayed! There was an accident with one of the passengers, help was provided late and because AirAsia are not providing stickers with the passenger details to the bags etc.. it took another 30-40 mins to find the bag of the passenger that was removed from the flight. Everyone was shocked and panicked, when I requested water after an accident it wasn’t provided, you have to buy it! Just ridiculous! Flight was 3 hours + and with all the delays we were in the airplane for more than 4-5 hours! Customer service is as low as it could be. Not talking about how uncomfortable and tight the seats was.
1/10

"They should bring more food"

Not Verified | According their check in process, they mentioned we able start online check 14 days before departure. However, in reality is 10 days before. They should make the correction. Flight return from Krabi to Kuala Lumpur, most of the inflight meal was sold out. Cabin crew mentioned only left “ Nasi Lemak option”. When they make this announcement flight already on sky of Selangor. I don’t know what the purpose they make announcement of food sold out when the flight prepare for landing. They should bring more food since they notice no restaurant operate in international terminal. A320 Neo seat is suck. Not comfortable. 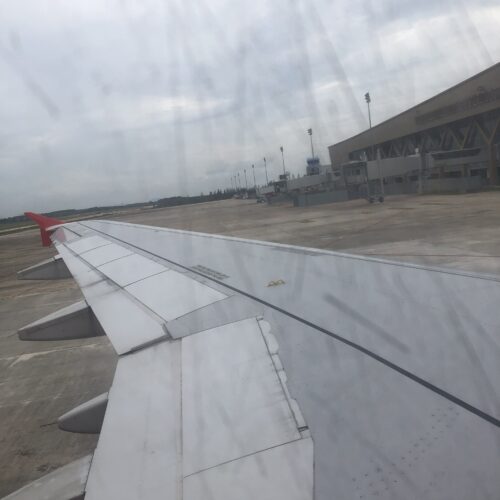 ✅ Trip Verified | Never again with AirAsia. I wish I could have given it 0 stars. This is coming from a loyal customer during pre-pandemic days. This airline unfortunately never recovered from the pandemic. Both sectors (inbound and outbound flights) were delayed by more than 1.5 hours. Finally landed in the domestic terminal and was ushered by a bus to go to international, before walking all the way to immigration, and then had to wait for luggage. Absolutely horrible and ruined my day/week.
2/10

"when it was time to board no wheelchair"

✅ Trip Verified | My wife has problems with her knees and has great difficulty with stairs so we notified the person at the counter, they asked can she do stairs, I said no she can not. They said ok and charged us for wheelchair. Then she had a wheelchair brought and said I was to push it. I declined and she sent for someone. We had a layover in Kuala Lumpur and when it was time to board no wheelchair, and a long ramp and then she had to climb stairs anyway. When we arrived in Danang again no wheelchair. And nowhere to contact customer service to get our money back. Never again.
1 to 10 of 836 Reviews