"excellent on every level"

✅ Trip Verified | I required assistance on flights from Edinburgh via Athens to Santorini, and on my return , I would like to thank all of your staff at every stage of my journey, they were excellent on every level and made my journey so easy and were pleasant and made me feel comfortable, thank you all so much
7/10

"cabin crew could have been more strict"

✅ Trip Verified | Check-in in Dublin was handled by Swissport, the staff were friendly and efficient. The Swissport staff apologised that the lounge was not available (not sure if this was Covid-19 related or because the flight departs at 23.59), in any case Aegean should really make this clear at the time of booking. Fast Track security was also closed but it didn't matter as there was hardly anyone at security. Boarding was well managed. The cabin was modern and comfortable and USB ports were available at the seat. The Cabin Crew were charming and efficient. The on board service consisted of a bag containing a sandwich, a muffin, juice and water. There was also a bar service with alcoholic and soft drinks. I had pre-ordered a gluten free meal but all special meals have been suspended due to Covid-19. While I understand the need to simplify the service I think it should still be possible to provide special meals in a pre-packaged format like the standard meals. My only other observation is that the cabin crew could have been more strict enforcing face covering requirements where passengers were wearing these below the nose/mouth. Although I had booked a flexible business class fare there was still a substantial fare difference to change my return flight date.
1/10

✅ Trip Verified | I cannot speak for the flight itself but for the boarding experience at Malpensa Airport. Boarding staff were verbally aggressive towards me. I hadn't the PLF form to fly to Greece but managed to submit it while waiting fellow passengers boarding, the flight was due to arrive at 9 pm and I would receive the PLF at 0 am the next day so I could easily waited that time at Athens airport to present it to authorities, still the boarding gate lady, which spoke fluent Portuguese and was Portuguese, refused me boarding.
1/10

"sandwich, a snack and a bottle of water"

✅ Trip Verified | The A320neo has 31 rows of seats which means the legroom is very tight. During e-check in they allocate you seat which you cannot change unless you pay at least €5. Inflight service was poor with a bag which contained a sandwich, a snack and a bottle of water. They do not serve alcohol due to covid-19. Announcements were on English and Greek. 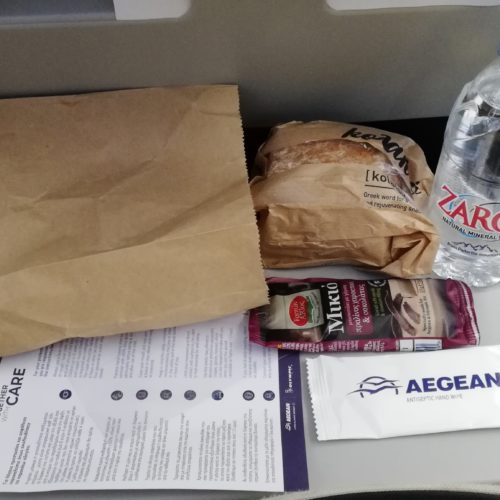 "do not allow a backpack and a cabin bag"

✅ Trip Verified | I had two calls with them on the 23rd and the 24th of July with regards to changing my flight. According to them, I could have one change without penalty with no extra charge due to Covid-19. However, because I needed to change airports, I had to pay the penalty. Whilst on my first call, the girl I talked to told me that I needed to pay 100euros for the change whereas the next day I was told to pay 140euros for the same change (Note: The flight rate didn't change at all). Despite the difference, I changed my flight ticket asking for a baggage too. They booked my ticket without adding a baggage! I called yesterday to ask what happened and they were telling me that there was no charge for the baggage. Then, they told me they would listen to my recording and call me back. They called me two hours later; the phone was ringing for 5 secs and I did not manage to pick it up. I called back and I was told that the girl who was assisting me finished her work for the day. The next person told me that would look into it but instead of putting me on hold, they hung up on me and never called back! I called again today, the assistant could not find the notes of the first person who listened to the recording and of course did not add my baggage for free. I did however requested both calls (the one asking for 100euros and the second one when they asked for more money and did not add my baggage); I am waiting for the response. On the 2nd of August, I flew from Athens to Heraklion. There was about a 2-hour delay and the airline offered us a free ticket. However, they state that I cannot use the free ticket during Christmas, Easter, July and August but as I live in the UK and I am not allowed to use it the only periods that I can travel to Greece. Due to Covid-19 they do not allow a backpack and a cabin bag on board. They do not allow to check-in the cabin bag. The price tickets are not cheaper either.
5/10

"seat selection is not free"

✅ Trip Verified | Up until recently Aegean was one of the best carriers in Europe. This is not the case anymore as they are adopting more and more policies of a typical low cost airline. For the lowest fare category (go light), one item is now allowed in the cabin and seat selection is not free. Any extra item cannot be checked for free but customers need to pay a fee at the airport. I just hope this is a temporary measure due to Covid19.
1/10

"kept taking their masks off"

✅ Trip Verified | Flying from Rhodes to Larnaca with my family during the Covid-19 pandemic with Aegean Airlines was not a nice experience. The passengers behind us kept taking their masks off and talking, and despite our numerous attempt to ask the staff to ask the passengers to keep their masks on they took it off. Even a steward talked to them for 15 minutes while it was off and still they did not care. We ended up having to keep it on for everyones safety and they just said relax.
1/10

"could only bring one item on board"

✅ Trip Verified | Heraklion to Thessaloniki. They said that because of covid-19 we could only bring one item on board. People had to measure their luggage size and to pay 40 euros extra, while there was plenty of space on board. At the same time there were really no airport covid19 tests taking place. Also my seat was small for 75 mins flight.
9/10

✅ Trip Verified | Barcelona to Athens. I'll have to start with the fact that they let you have a checked in bag which weighs up to a certain amount of kilos for free, which as far as I'm concerned is not the case for many airlines. Flight was initially delayed by half an hour or so which for me wasn't a lot as I didn't have any connecting flights to worry about, but I understand that for some people this might not be the case. Boarding was done via jetbridge and was rather fast considering the flight was full. We boarded the plane, but didn't take off for nearly another two hours due to a thunderstorm over the airport. The seats were very comfortable for Economy class, but again I'm only 1.62 so my opinion on this probably isn't relevant. The pilots made an announcement straight away and the flight attendants handed out free drinks to everyone during the time we spent on the ground. The pilots kept informing us of the situation and when we finally took off the flight was extremely turbulent, but they handled the situation pretty well I must say. A free hot meal was provided for all passengers, both Bussiness and Economy class which is very rare these days for an intra-european flight. When we arrived in Athens the pilots made an apology for the delay and announced that every passenger who had missed their connecting flight would be offered either a free rebooking or a voucher but I can't remember exactly, as I didn't need one. Luggage came out quickly and it wasn't damaged in any way. The price was ok but considering their excellent service I can't even think about complaining about the price. The only thing that I didn't quite like was the fact that there was no in flight entertaining as there were no screens which having flown on their A320s as well I know are present there, but not in the A321, but again, I'm not complaining. Fantastic experience and I would totally recommend this airline.
10/10

✅ Trip Verified | Aegean is my favorite Greek Airline. In July 2019 I travelled from Munich to Athens. Aegean aircraft was perfect also seat was perfect. Landed on time at Athens Airport with smooth landing.
11 to 20 of 614 Reviews