"inaccessible to a wheelchair user"

Not Verified | We arrived after our flight and a family member experienced a terrible ordeal as they needed assistance to disembark. Two people arrived on the plane, threw them onto a small wheelchair as they do not know anything about handling people with mobility problems and proceeded to push them the full length of the aeroplane banging their hip on every seat even though they were shouting out in pain! On the return journey they required an accessible toilet on arrival at the airport which we could not locate. We were approached by someone with a wheelchair symbol on their back, indicating they were there for people with disabilties. We were directed to the main toilet and told that the accessible toilet was at the end of the row of the others. Due to the narrow access into the main tolets, it was totally inaccessible to a wheelchair user. We were then taken to the desk for assistance to be greeted by really rude people. My family member could not go to the toilet downstairs as it appears they think wheelchair users can push past people queueing and get through a very narrow space, absolutely disgusting. Terrible service for people with needs!
1/10

"What a terrible experience"

Not Verified | Hell on earth is the only way I can describe our experience. As a seasoned traveller this has to be the worst airport so far. Horrendous walks from gates to passport control only to be greeting by terribly long queues, 1 staff at passport control who are content to laugh and chat with each other while 100s of holiday makers wait. Return journey 4 desks on for 3 flights massive queues for so bad and delays so high that the ended up having to pull us and our flight members out of the queue as check in had passed then had long walk to passport control to face more queue to then rush to queue to board plane l. What a terrible experience.
1/10

"45 minutes to show our passports"

Not Verified | I as a norm like this airport. When we where on are way home we had to stand for 45 minutes to show our passports. There were hundreds of people waiting even young children. It was grim. One person tried to run through as they where going to miss their flight. There was only 2 staff on for 45 minutes and they where deliberately going very slow. If it happens again we will give Palma a miss. When more inspectors did arrive hundreds of passengers raced through to their gates - grim service. 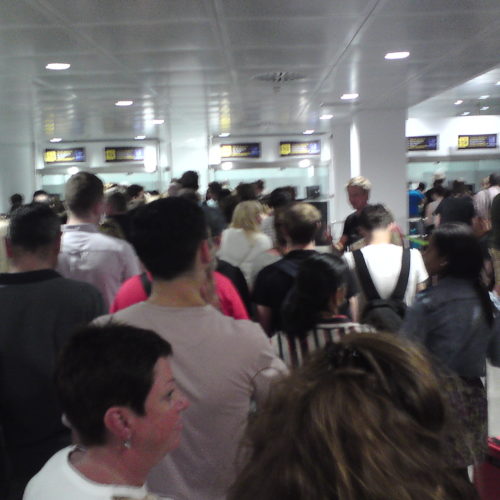 "Worst part of the holiday"

Not Verified | No smoking areas past security for customers, but you can tell the staff have access to smoking areas. The security staff demanded receipts for all things in my duty free bags and refused to provide documentation that substantiates their claims. I was expected to take their word on their authority which was a violation of my rights. Staff at one of the food services inside the airport prior to security lied to us and told us only one restaurant was open past securitysecurity and it just sells burgers, just so he could sell us a microwaved sandwich. Worst part of the holiday. Will not be returning to Majorca any time soon.
9/10

Not Verified | On arrival at this airport it was refreshing to be met by the special assistance team who on this occasion were professional and pleasant. On our last trip to this airport I wrote a review lambasting the organisation at this airport for the utter unprofessional attitude of the team. This time they were brilliant and we were on our way with the minimum of fuss. Thank you very much.
7/10

"This is totally ridiculous"

Not Verified | On departure from this airport we were faced with a problem regarding the disposal of my wife's three wheeled walker. At the special assistance desk I was told to take the walker to the security belt at the other end of the terminal as the one next to the special assistance desk was not to be used for TUI passengers. This is totally ridiculous. This is a long walk and having to leave my wife by herself was not a good idea as it upset her.
1/10

Not Verified | I loved our holiday to Mallorca but unfortunately may not be going back there due to an ignorant, unprofessional member of airport staff there which was enough for us to not want to experience this again. He was ushering passengers through the metal detectors. Parents were given hand gestures to send their frightened infants that were too small to understand through by themselves. There were two elderly ladies, one of which was in a wheelchair and was gestured to get out of it and walk through which she did very gingerly with no aid. Her companion was not offered any help to collapse and lift the chair on to the conveyor so I did. Our 6 year old daughter has learning/mobility issues and she was asleep in her pushchair. Even though we had a doctor's letter explaining she is disabled the member of staff was not interested and insisted (via more hand signals and pointing) she come out. He was also wanting my daughter to go through by herself which was never going to happen and my wife who was carrying her began to get quite upset until a member of security the other side beckoned her through. I do my best to speak the native language but how is it, so many residents of the island can speak some English but it conveniently escaped this miserable and rude member of airport staff that would only point! He didn't actually need to speak English to deal with the varying needs of the public with compassion and required professionalism.
3/10

"didn't think it could get worse"

❌ Not Verified | Well, I last went there 3 years ago, I didn't think it could get worse but it has. It's a shamble's of a airport, real bad layout, took ages for the cases to come. Then coming home was worse, it was like a cattle market trying to check in. I can honestly say I will never go back to Majorca which is a shame as it is a beautiful Island. Pity the airport lets it down.
5/10

❎ Not Verified | Poor experience. We travelled on 26/03/2018 and after checkin we progressed through security to find hardly any places open. The subway along with a decent restaurant was closed and the 2 bars closed as well. Definitely eat and drink before you go through to departures.
6/10

"departure was as painless as our arrival"

✅ Trip Verified | As frequent visitors to Majorca we are very familiar with Palma Airport and have few problems when passing through. Arrival and departure in low season can be something of an adventure, however, as major alterations take place then so UK originating flights are often sent to more remote gates. This was the case last week. Our plane had a long taxi-ing to a distant stand and the transfer bus also had an extended journey. Making our way to the arrivals hall, we walked through unfamiliar parts of the terminal. Long distances apart, there were no delays as the airport was very quiet. It was much the same in reverse for departure: quickly through security (though I was selected to have my hand luggage swabbed) but then a long walk to our gate area which seemed to be hidden behind a screened-off section being redeveloped. We then had to wait for some time at passport control until the officers in their boxes deigned to open up for business, presumably in no hurry as our flight to Liverpool was the only UK-bound flight for a while. That minor irritant apart, our departure was as painless as our arrival. The difference in activity in the airport between summer and winter seems to be increasingly greater: absolutely bustling in the former and almost deserted in the latter.
11 to 20 of 90 Reviews