✅ Trip Verified | I’m very disappointed in the way this airport is managed. Always delays (I fly 2 times per month from there) unfriendly staff and dirty unmaintained toilets
8/10

"staff were courteous and efficient"

✅ Trip Verified | The setup for non-Schengen departures can easily separate you from all but a single cafe and duty-free store with limited hours. Once through security follow the signs for A,B,C gates to go down the escalators and enjoy the full variety of restaurants. Look ahead to see how long the passport queue is to allow enough time to come back up the escalators and pass through immigration. Both security and immigration queues for both our early-morning arrival and late evening departure were almost non-existent. I had to alert one of the security staff to our presence when we got the queue as there was no-one ahead of us. All the staff we encountered were courteous and efficient. I don't expect security or immigration officials to be particularly friendly and none of them were. 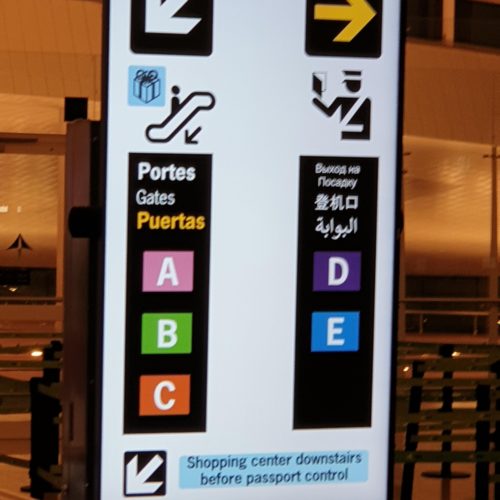 ✅ Trip Verified | Terrible signage, unhelpful staff, filthy bathrooms. We arrived early for our flight and went through passport control as normal at any airport. Unfortunately, once you have gone through passport control for gates D & E you are now unable to access any of the quality food and shopping options. There is no signage to indicate what you are in for and no opportunity to go back. Congratulations, you are now stuck in the dingy, third rate upper tiers with its low-end food options and execrable toilets. Prepare yourself for staff to smirk in your face as you ask them if there is any way in which they might assist you. Great city. Garbage airport.
1/10

Not Verified | The airport was poorly signed. No indication given that once you are through passports control you are ushered straight to a smaller area for departure gates with no access to shops or range of eating places. It would have been helpful to know that as we arrived at the airport very early to ensure we got there due to protests occurring during our visit to Barcelona. Very disappointing airport experience.
1/10

✅ Trip Verified | The worst airport ever, sent straight to gate by staff, we were really early for our flight but not allowed to go to the shops or nice restaurants. We were not offered a choice. Staff just ushered us to passport control straight from security. As no other airport operates like this we didn’t question it. Not happy. Very few information signs too.
2/10

✅ Trip Verified | Terminal 1 is a modern, bright and clean terminal. Terminal 2 in the check in area is horrible. Besides being old, it was dirty. Signage is poor and there was no one that could provide us with information on where we needed to go. The bus driver that transferred us between Terminal 1 and Terminal 2 couldn't not even provide simple information like which area in the 3 terminal building 2 A, B or C that you had to go for a specific airline. They had information booths in both terminal buildings and in terminal 1 the information clerk provided us with incorrect information and in terminal 2 we got the correct information and reported to the desk which supposedly was connected with Air Transat. The sign on the window of the office stated that they were not an information centre and then the girls behind the counter were completely unhelpful. I have been in a lot of airports across the world and this was the worst.
7/10

"the airport is quite easy to navigate"

✅ Trip Verified | Such a spacious airport, very clean. Plenty of shops and places to eat (and not so expensive). Also, the airport is quite easy to navigate (despite this tendency at Spanish airports to have letter combinations that can be confusing). I wish you good luck if you want to charge your phone or laptop, though. It is the only lowdown.
1/10

Not Verified | Filthy restrooms. Far too few toilets that are disgusting. There are often lines to go to the womens toilet. Third world airport. Avoid it if you can or go to the yoilet at home or in the aeroplane
5/10

"still has a number of issues"

✅ Trip Verified | Arriving into Barcelona from Madrid on Iberia, we landed at Gate A1, which has a special baggage claim attached to it just for passengers from Madrid. However, there's apparently a rule that your bags only get sent there if you started your journey in Madrid; since I connected through Madrid I was told to walk 10 minutes to the main baggage claim. The bags also took a long time to come out, and it seemed like they were unloading one bag per 30 seconds. None of this was helpful given that I had flown through the night and was extremely jetlagged and sleep deprived. Once through Customs the arrivals area is OK, and it's very easy to get the Aerobus into the city, but I'd recommend waiting for a bus with seats; standing on a bus on the freeway is no fun. I flew out on Vueling a few days later. Taking the Metro to the airport was nice, while it was much slower than the Aerobus, it was also much less crowded and is covered by your Metro Pass if you have one that's good for a specific amount of time, such as a daily pass (though the T-10 pass doesn't work). The check-in staff were mostly absent and rude when found, but that may be Vueling's fault instead of the airport's. Security had reasonable lines, but there are turnstiles that block the entrance to security, and the boarding passes from some airlines apparently don't open the turnstiles (this seemed to affect passengers on Lufthansa and Swiss the most). There were plenty of places to eat and drink once past security; they were expensive, but not unusually so for an airport. The airport does have an outdoor patio past security; unfortunately, the patio is overrun with smokers and there's no hope of getting fresh air over the stench of cigarette smoke. Overall, Barcelona is a decent airport, but it still has a number of issues which need to be ironed out.
4/10

✅ Trip Verified | Will we start with the positives? Decent variety of shopping and eating options in T2 and the airport is clean. The bad? Staff are absolutely awful, especially at security. Rude and abrupt. I arrived earlier than the standard couple of hours due to the ongoing security personnel strikes and was gobsmacked at the staff on hand at this part of the airport. The entire crowd was repeatedly told to ‘hurry up’ to get in the security queues. Then, when my boarding pass wouldn’t go through the initial check because I was early, I had a member of staff laugh in my face, tell me go back to check in and told me it wasn’t his problem. He then proceeded to talk to his colleagues about me, thinking I was daft enough to not get the tone being used even if I didn’t speak the language! God awful and embarrassing for the city.
1 to 10 of 259 Reviews