"I have met nothing but issues"

✅ Trip Verified | I have met nothing but issues these last few years trying to find logic in how they work. Constant delays, every flight I've traveled with this company over the last few years have been delayed one way or another, whether its domestic flight or international. they have been delayed all of them. I understand that things can happen before during or when landing that can cause delay. but when its happened every time i fly with them, I've reached the end of my patience. In the last trip i took with this AL (12th of July - 31th of July (Was suppose to be the 30th) but because of delay i had to spend the night at an airport hotel. Roughly a week before my first flight, my trip's return date got rebooked, and with covid happening and quarantine being a thing i chose the specific return date for the quarantine, and the rebook date was making it so that the last day of quarantine would be the first day of my job. So i was trying to reach the support line several days in a row, spending several hours on hold to get help - I never did get through to them. On my way to the destination with this company just a few weeks ago the flight was delayed to Oslo by over 30 minutes. now these 30 minutes were crucial to make it to the connecting flight which i didn't make and because of that i had to go back out and through to checkin to get help again. I dashed through the airport in hopes to make it, but to no avail. The airline had no more flights to my destination. the issue for me isn't the direct thing that i missed that flight but the lack of preparation for these situations, whether they hold the flight for just a few minutes for the people on the flight that have connecting flights with the same company or quicker assistance in said situation instead of having to run around the entire airport just to get help. In the end i got transfered to a different airline, and reached my destination eventually. When going to retrieve my baggage from baggage claim my suitcase was nowhere to be found, when talking to baggage assistance by the belt was told it was never loaded onto the plane. I had to wait 2 days getting my baggage back. Last but not least the return: plane took off 30 minutes past expected departure time. missed my connected flight and had to spend the night. Got comped for the hotel, but not food. if you have an option other than this airline.
1/10

"Is this how SAS welcome back frequent flyers?"

✅ Trip Verified | Is this how SAS welcome back frequent flyers? Dear Gold Card member: since you haven’t used our service for a year we have downgraded you to Silver - now you start using our service again. Thanks for that - I will have no loyalty to travel with SAS going forward!
1/10

"I was cheated on the voucher and on my own money"

Not Verified | Never choose this airline. I was cheated on the voucher and on my own money. I received a voucher with a long delay, when I used it it turned out that my flight was canceled again and I could only choose the option of another voucher. In the meantime, I was making calls and wasting my money on calls to get my money back. With no result. All the time I was waiting for another voucher for the second canceled flight, today I called to ask where the voucher was and I found out that this voucher for the second canceled flight was the first voucher!
1/10

✅ Trip Verified | The absolute worst customer service, bar none. I've been trying to get my money back for flights cancelled due to Covid for over a year and a half. Slipped into a "voucher" I didn't request that locked my money up for 12 months - and not 12 months from booking date, or original flight date - 12 months from date of voucher issuance, which was already several months after the trip that never happened was scheduled for departure. June 2021 finally rolls around after booking the tickets January 2020 & the last time I called they were about to automatically extend that voucher another 6 months. Without. Asking. Me. Or making any effort to give notice. I had to fight tooth & nail to make sure that didn't happen. This is all over a "refundable" voucher. What an amazing feature ... when you actually refund people their money. I've had a collective 17 phone calls with these clowns, and I've never spoken with a less helpful bunch of idiots. Everyone says something different than the last person. Absolutely no systems or processes in order as a company when it comes to policies and training - that's painfully obvious. Hour long hold times for somebody to hang up on you within minutes of answering so you get to go through the wait process again and burn your afternoon. I've waisted nearly 15 hours of my life talking to these people. I have the menu systems and robot prompts all memorized by what numbers I have to press to get me through the quickest. I feel for anybody going through the same situation with these morons. A Delta refund from the same trip took 1 email and the money was back in my account within 5 business days. Do better SAS. I'll never book with you again.
1/10

Not Verified | Flying to attend my mother's funeral. The connecting flight was cancelled and SAS issued and send to my email a return ticket, which they later forced me to accept. I applied for refund for the slots I haven't received any offer. This was done on the same day (July 2020). Almost a year later I am still waiting for my money. Have already called more than once asking about my request but all I hear from them is a promise they will go though my request and get in touch with me within a week. I will never use this airline again. Cannot be trusted and are far from being considered reliable.
1/10

"too bad, you lose your money"

✅ Trip Verified | SAS cancelled my flight, and refunded the funds on the voucher I had used to book this flight. Unfortunately the voucher expired a few days after the refund, of which I wasn't informed. So when I wanted to rebook my flight, I couldn't do that. When I inquired about this, the replay boiled down to 'too bad, you lose your money'. I really wonder if this is how SAS acts normally, because I don't call this customer friendly.
1/10

"SAS refuses to make a refund"

✅ Trip Verified | We had flights booked in June, (booked almost a year ago) but the Norwegian authorities have closed the area we were visiting to foreign nationals for Covid reasons. SAS refuses to make a refund, arguing that since it is still operating the flights, it is our decision not to travel. This is a bucket shop airline. Avoid it at all costs.
1/10

"they just changed my flight"

✅ Trip Verified | SAS posted fake advertisement on Instagram and promoted cheap flights from Oslo. I purchased 2 tickets and spent 1600 NOK on Wednesday. Then on Friday they just changed my flight on a day (it was a short trip, I couldn't accept that change). And they offered me only 400NOK of refund. They cancelled my flight (or perhaps there were never a real flight scheduled on that date) and offered me only 1/4 of my money back. That's what I call stealing. I will never use it again.
9/10

✅ Trip Verified | I can't agree on the bad reviews. I had to cancel or change my tickets a few times and all went well. Customer service both at the (Scandinavian) Airports are good and I had someone on the phone instantly. The flight itself was pretty empty and the service was limited due to the pandemic. Very friendly cabin crew and extraordinarily comfortable and warm cabin design. I even got a free smoothie! I would always fly SAS again. 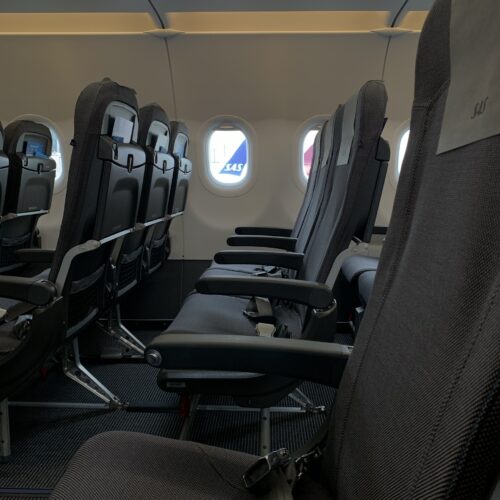 ✅ Trip Verified | SAS airline uses any possible trick to make money. It is disgusting how a company conducts such business. I know its about surviving and not about competency. They rather prefer to scam you rather to have an understanding of the customer situation. After paying for the ticket few months back, I had to change the date as Sweden closed because of Covid 19. The changing fee and the ticket costs more that 500 EUR for 1 hour flight. How stupid of me to pay such fee. And now as Sweden is still closed I had to cancel the ticket and got back, 0.16 EUR. I could never fly aging with an airline that has such low morale. I flew to 115 countries and never had such a terrible experience,
1 to 10 of 713 Reviews