"Last time that I book with Qantas"

Not Verified | Appalling customer service. Booked a RT flight from Adelaide AUS to Nelson NZ to see family for the first time since COVID. Just received an email with a flight change from Qantas for our return flight but they've completely forgotten that we are departing from Nelson NZ - Auckland arriving at 2pm, and booked our departing flight out of Auckland at 6am the same morning. How on earth do we get on a flight that departs Auckland 8 hours before we even arrive from Nelson? Now on hold for 2 hours, no assistance provided. Last time that I book with Qantas.
2/10

✅ Trip Verified | Monumentally bad service from Qantas - flight was over five hours late departing. No information given to passengers and, due to multiple flight cancellations to other destinations, the few customer service staff were unable to cope with demand from passengers. What I witnessed and how I saw some customers treated was appalling. What an ungracious airline and an experience I would never want to repeat.
8/10

"Cabin crew were efficient and friendly"

✅ Trip Verified | QantasLink branded flight operated by Alliance Airways. The plane, an Embraer E190 had Alliance markings, but the cabin crew wore Qantas uniforms. First time on an E190, but I'd noticed on the Qantas website specs the seat pitch was more generous than their B737. Between that and the design of the seat, it was a very comfortable cabin indeed. Good space, relatively quiet, smooth flight particularly the landing. The only downside was being a leased plane and not a Qantas own aircraft, there was no Qantas entertainment or inflight WiFi. This scuttled my plan to do some sightseeing planning while in the air to Adelaide. But I was content to play some stored tunes and relax in the comfy seat. Cabin crew were efficient and friendly.
1/10

"refused any compensation or refund"

✅ Trip Verified | Made a booking with Qantas Frequent Flyer points on 27 February 2021 for a domestic flight departing 9 April 2021. At the time, the website stated that I had enough points and accepted the booking. The following day I receive an a "no reply" email from Qantas asking to call them about the booking. It was impossible to get through on the phone. The Qantas website continues to show that my booking is confirmed. On the day of the flight, I receive a voicemail asking me to call Qantas. I tried to call back and was still on hold hours later when I arrived at the airport. The customer service rep at the airport advises that I do not have a reservation because I did not have enough Qantas points at the time of booking 2 months ago. I was required to pay over $700 to make an on-the-spot reservation. I've been through the complaints process with Qantas and they have refused any compensation or refund. Abysmal customer service. They need to update their website interface so it can process bookings and reflect their status accurately.
8/10

"will fly QantasLink and this route again"

✅ Trip Verified | I have flown this service before. It is a quick flight between the 2 major regional cities in the north approx 45 min flying time cutting down around a 3 to 4 hour drive. There is no classes available and whilst you could select your seat it was on a first come first served basis. The plane was full only a few empty seats so no opportunities to move seats. It is mostly workers commuting between the cities or to connecting charter flights for mining We were slightly late on take off due to the catering being late. The catering company also failed to deliver the alcohol so they made the decision to leave without it. We did however land on time. I can't blame the airline for this but I was looking forward to having a glass of wine. They provided an inflight snack 'manna from heaven' which was a small box of 3 x bite sized snacks very tasty & your choice of soft drink. Considering the flight time was so short the cabin staff did well to serve the whole cabin & do a rubbish collection and then we were ready for descent The cabin crew were courteous and efficient but nothing jumped out to me as a WOW The cabin and seats themselves are very tight and not a lot of room. I would imagine it would very uncomfortable for a tall or large person ( i am only 5 ft ) especially of the flight was longer then 1 hour. The cabin was clean. There is no entertainment provided or wifi aboard but again for such a short hop it isn't needed. I will fly QantasLink and this route again. 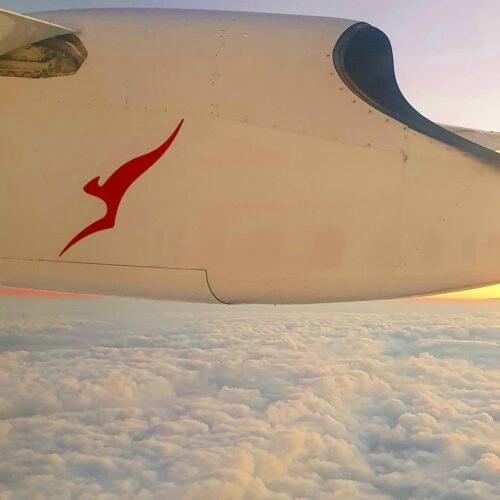 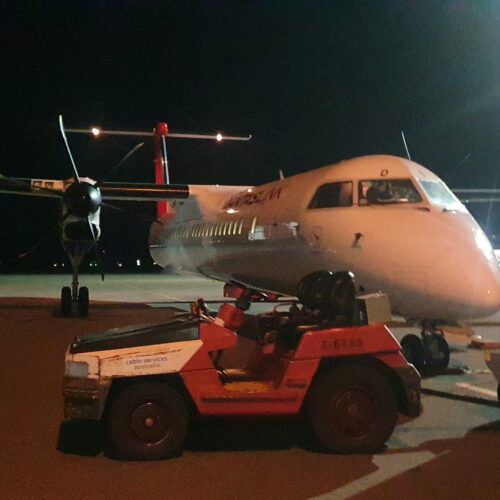 ✅ Trip Verified | So what was due to be a 3 hour direct flight turned into a 9 and a half hour day with major delays due to incompetence. Boarded flight out of Canberra for a 9.05 departure only to be informed by the Captain at 20 past there was going to be a delay of a further 10 minutes as they were unable to locate the paperwork for the flight from the previous overnight engineers shift. After this we were then informed shortly later we would be disembarking as the paperwork was not marrying up and the engineers had not completed the routine maintenance that was required overnight. We then boarded a new plane after 1 hr 45 minutes waiting in Canberra for what should have been a direct flight into Cairns as per the previous initial flight. Shortly after take off approximately 25 minutes into the flight the Capitan came over the cabin speakers to inform us that there was a minor technical fault associated with the plane. The flight control tower at Cairns had requested a turn around back to Canberra base, the pilots chose to ignore this and requested a diversion to Brisbane. We were due to land at Cairns at 12.10 however at 11.45am we landed at Brisbane airport at the same time we should have been in Cairns. We were then told we would be required to speak to ground crew for further details although our updated booking tickets all showed a new flight of 12pm that we would cross over too. Each person onboard the aircraft had received the same emails and text messages notifying us of this. Yet off we went to the customer service. We then were informed that we would have to collect our baggage, the flight that was scheduled for us to move onto had been cancelled and we were to re-check in. We were checked into the 3pm out of Brisbane arriving at 5.25pm over 9 hours which should have been a 3 hour flight. Others onboard were rescheduled for a 10pm departure arriving at Cairns at 12.20am in the morning and further more others where told they would not be arriving until around 11am the following day and would have to overnight in Brisbane. Meanwhile many also missed connecting flights to Darwin and also smaller Townships up north on the Queensland coast. To add insult to injury we were offered a $15 meal voucher for our inconveniences. Upon arrival at Cairns we waited for 45 minutes for our luggage to make it from the undercarriage to the conveyer belt. How is Qantas the Spirit of Australia and the so called National Airline it claims to be priding itself in customer services and safety. If I wanted a layover in Brisbane or Sydney and a 9 hour day transiting I would have booked this. I vowed never to fly Qantas many years ago after another awful trip where we missed our connection, Cairns to Sydney, Sydney to Canberra and where told the plane would be held for all connecting passengers, due to incompetence from Qantas ground staff at the Cairns end. We were forced into hotel accommodation that evening. Did we receive an apology from Qantas or any other form of compensation. No. Lesson Learnt I'll never fly Qantas again. I think I'll stick with Virgin like I have in the past with the personal service, the effective communication, on-time running and the professionalism from the cabin and ground crew. Hence I've always been an avid Virgin Fan and frequent flyer. I only took up the offer of the new Cairns - Canberra direct as it was supposedly a direct flight as new to the airline to entice further tourists and also to help businesses travellers.
9/10

"flight was a near-perfect experience"

✅ Trip Verified | Our flight time was changed by Qantas at short notice to one that didn't suit us. After hanging on the phone for literally hours I got through to a very friendly operator who willingly transferred us to another flight without charge. Going through Melbourne airport in the early morning in the coronavirus era was a breeze. The QF lounge was not very busy, and while the range of food and drink on offer was less than normal it was acceptable and the service was good. Boarding was efficient and friendly, and an enormous spread was served for breakfast. The seats were very comfortable and the flight operated on time. Despite the change of flight time, this flight was a near-perfect experience.
10/10

"had a great experience"

Not Verified | Canberra to Brisbane. Cabin crew were very nice. They acknowledged my birthday and made the flight very pleasant. Karly, Marious & Ingrid were very professional and nice. I had a great experience flying with QantasLink.
10/10

✅ Trip Verified | Townsville to Brisbane Departure 13.40. Checkin & boarding online although printed out back up boarding pass . As always Townsville Airport very relaxed feel & friendly staff. This flight the 2-3 seat configuration & we travelled in the seats on the 2 configuration side which is good. We originally had I think chosen 2 seat configuration at back but allocated 2 seats at front which was good I think because the Cowboys Rugby team on board at back of plane sitting as a group. Snack & hot or cold drink served gluten free biscuit. A good flight & arrived safely.
9/10

✅ Trip Verified | Townsville to Brisbane. Check-in was done with ease and boarding was completed in a easy and timely manner. Travelled on the 8pm service and departed on time. As always, a very pleasant flight on the QantasLink 717; smooth, quiet and with entertainment supplied. The food service was acceptable; the serving could be larger, but was not left starving. Cabin crew were polite and approachable. Arrived ahead of schedule, as advised by the wonderful flight deck crew.
1 to 10 of 113 Reviews