"Unfortunately when arriving in Athens no bags"

✅ Trip Verified | Heads up for anyone planning travel in the Greek Islands. After visiting 3 Greek islands our last stop was Athens flying from Naxos to Athens on Olympic Air. Short flight, very convenient, and reasonably priced compared to Ferry option. Unfortunately when arriving in Athens no bags. This is a typical practice by Olympic as the small planes quickly are over weight limits and if you are unlucky no bags when you arrive. In our case the bags are being put on the Ferry and will arrive 3 days later. Not a great situation when on holiday. Strongly encourage folks to think about this risk when taking these short flights between the islands.
1/10

"will not refund any thing"

Not Verified | My travelling partner tested positive for COVID 2 days before the flight and we were then unable to travel. Called the airline immediately - 4 times never got through - finally did - a curt and snappy agent - told us there was no chance to do anything. Will charge you for cancelling, will not refund any thing, will charge you again to move to a different date. Paid for extra bags, no refund, taxes paid will not be refunded. 300 euro paid for 2 people for a one way flight lasting 30 minutes.
5/10

✅ Trip Verified | Rhodes to Athens delayed by 42 mins. Very sad to see the delays in Olympic Air flights. Queue for check-in, delayed flight, barely any checking of my COVID vaccination status for domestic flight, no parking at jetway gates, no air conditioning in airport buses in 40 degrees. The cabin is still operated very well and the flight attendants are very helpful.
2/10

"too big for carry-on luggage"

✅ Trip Verified | We arrived to the ticket counter at 5am to get our boarding passes, there were 7 of us. The person attending looked at our luggage and said only one of our luggage was too big for carryon so we paid $25 eoros to check it in. When we arrived to the gate and were about to board they attendant said that 4 other of our luggage were too big for carry-on luggage, same luggage we had on carry-on on 4 other flights we took to get to Santorini. Because we did not pay at the counter it would be 40 euros per luggage. I told the attendant that the person in the ticket counter told us they were ok for carry-on, and that person was actually also now helping with boarding so I pointed to her. One was the person in the ticket counter and the other identified herself as the supervisor. We talked to her telling her that 40 euros was extreme when we could have paid 25 euros at the ticket counter, it was like talking to the wall. She didn't look at us and really didn't care what we were saying. They did that to 4 other people that were also tourists. Its seemed like they were deliberately misleading people to charge more money. It was very upsetting because the flight had so much space available for our luggage. They should train their staff with better customer service. "had to document the luggage for 40 euros"

✅ Trip Verified | At check in, the agent reviewed our carry on luggage and said it was fine to take to the airplane. But the door another agent said it was too big and we had to document the luggage for 40 euros. We explained the situation but agents at the door keep ignoring us, just wanted the payment. The plain had many empty seats and a lot of room for carry on luggage but none of that matter. 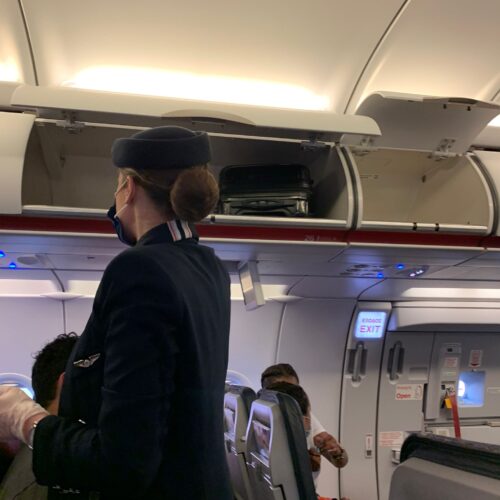 ✅ Trip Verified | I flew for business from Kavala to Athens. For a domestic flight I paid the same price as for going to Paris or Frankfurt. They packed us in a tiny airplane filled with passengers. Between the arrival and its departure there was not enough time to disinfect the aircraft. During the flight some passengers had brought their own dinner on board, spending as a result almost all the flight without masks in a jam packed environment. As if this was not enough when arrived in Athens they packed us in busses in order to reach the airport. Very disappointed. If companies want to survive the pandemic in the long term, they must make passengers feel secure.
10/10

Not Verified | Efficient and polite check-in at Athens Airport, buses used to access aircraft for boarding. Greeted at aircraft door by smiling and courteous cabin crew who tried to keep order when passengers were finding their seats but the problem was that people were not listening to crew instructions and were not maintaining social distance. Many were British tourists I'm sorry to say. Very short flight, just 20 minutes and we landed early. Polite goodbye from crew. Nice flight.
1/10

"the staff were quite unfriendly and rude"

✅ Trip Verified | Most unpleasant flight ever. Their method of boarding the plane wasn’t very Covid-19 friendly so if you are someone who is concerned I wouldn’t recommend you travel on this airline. Most airlines board back to front to keep crossing paths with others to a minimum. Where as this airline boarding all window seats, then all middle, the all aisle seats together in bit seat order meaning that there were about 40+ people all trying to get ton in each bath and crossing paths. They also wouldn’t let you use the overhead lockers above you which causes you having to walk up and down the aisles to find space and then squeezing past people to get back to your seat. The worst thing about the journey was the staff were quite unfriendly and rude. If you want to ruin a relaxing holiday and come back stressed - 10/10 would recommend,
2/10

"find reasons to charge you more"

✅ Trip Verified | I flew with Olympic air from Crete to Athens. They have an inconvenient website which is not very clear of what baggage is allowed. When you go for bag drop the crew, with attitude find all the reasons to charge you more. I will avoid to fly with them from now on.
1 to 10 of 89 Reviews