✅ Verified Review | I bought a Business Class ticket between Madrid and Paris CDG on Iberia and was never told that the flight was operated by their low cost subsidiary Iberia Express. There is nothing wrong wih some Iberia affiliates: Air Nostrum for instance provides one of the best regional onboard services in the world. Not so wih Iberia Express. Business Class consists of the first three rows in the A320 cabin, but at a markedly reduced seat pitch compared to the main airline. The middle seat is left empty. As usual in Madrid, passengers are kept waiting in the glass jetways which are absolute ovens in Spain's weather. This was however the first time that upon boarding and getting in my seat 2A, I was denied a glass of water by a FA who was herself drinking mineral water and replenishing her own glass, while explaining to me that she could not serve anything before take-off. First row passengers were never told to stow their hand baggage which happily remained unsecured in the middle seat. The main Iberia Business class cabin service is plain at best but its "Express" brand is several notches lower, performed by completely uninterested FAs who literally throw flimsy trays at you. One of them missed and actually fell in the aisle where it remained for over 10 minutes. It was eventually footballed away by the young lady's shoe. Finally, the worst is that Iberia Express arrives at CDG T3, the charter terminal, with bus transfers, long baggage waits and a trek of probably 900 meters to finally reach a smelly automatic shuttle which, 5 minutes later, brings you to the civilized part of the airport. This felt like Ryanair without the competence. My ticket was anything but low cost. I was not amused. Why have a Business Class those flights at all? Avoid.
6/10

✅ Verified Review | I flew with Iberia express LGW to MAD and back. Check-in was speedy at LGW (staffed) and MAD (Self baggage tag). Aircraft were old and dirty. On the outbound flight, there was old boarding passes of some other passengers in the backseat pocket. Cabin crew was alright, but one was weirdly strict regarding on cabin bag - only big items could be allowed to place in the overhead compartment, even though there was lots of space in the compartments. Seats were extremely tight, and I felt it tighter than on Easyjet. I didn't feel confortable in either flight taken. Iberia express flights had a special wifi which allowed passengers to browse certain materials provided, which was quite nice. All in all I would not mind taking it again, but I would choose another airlines if the prices are similar.
9/10

✅ Verified Review | The flight from Madrid to Santiago de Compostela was on time on a busy friday afternoon, the cabin was very clean, good and friendly service provided by the cabin crey. Iberia Express provides a very good inflight entertainment system for this short-haul flight of about one hour. Seating comfort is standard but nothing special.
5/10

"seat given to someone else"

Gran Canaria to Heathrow. My prebooked exit row seat was given to someone else on a full flight. I was allocated another seat where the legroom was woefully tight. I can't remember feeling so uncomfortable especially as I was 18 euros poorer for having prebooked 14A and being allocated 23A. I was asked by a young couple to give up my window seat so I had an aisle seat which wasn't much better as the movement of people up and down to the toilets encroached upon my comfort. On the plus side, the flight was ahead of schedule and the cabin crew were again most charming and efficient. I would willingly have paid a bit extra if they had taken a few rows of seats out but would only fly this airline again if my seat requests (at extra cost) had been honoured.
9/10

London Heathrow to Gran Canaria was booked through British Airways and operated by Iberia Express. Terminal 5 is fine, the information / check in lady was charming. I had pre booked an exit row seat and this was fine apart from being a bit on the firm side. Three hours into the flight found me struggling to get comfortable. Aircraft was new looking, bright and cheery with good music. Cabin crew were very smart young ladies who seemed to enjoy their work. The flight landed 25 minutes ahead of schedule which saved the day a bit comfort wise. There was no catering supplied unlike BA who offer a drink and a snack on their services. You could buy refreshments but I didn't bother as I had eaten at Heathroiw and was going to drive when I got to Gran Canaria. A positive experience - baggage reclaim and car hire went very smoothly.
1/10

"ripped off I feel"

Horrible experience. Although we paid in advance for our luggage, I just had to repay for it at the airport in Madrid! No one of their staff had a clue - however some lady at the luggage counter finally found our reservation and proof of original payment, but was unable to reimburse me! Ripped off I feel.
1/10

Terrible experience with Iberia Express from Copenhagen to Madrid. Rubbish seat selection - a middle seat. Crew were mediocre at best, and that is being more generous than merited. The air hostess tore my carry-on bag out of my hand at shoved it into a random compartment without even bothering to tell me where it was. I had to wait for the rest of the passengers to alight before being able to find it. They had the nerve to charge 2 euros for a drink of water on a three-hour flight.
8/10

Pre-boarded Iberia Express aircraft flying from Las Palmas to Madrid and took up our seats in 1D and 1F bulk head. Very good space, middle seat left empty as per other European Carriers, which gave a good level of space. Newspapers were offered before take off. Crew were very friendly and attentive throughout the flight. Drinks offered just after take off, and breakfast was served just after. The meal was ok, very basic, with cold toasted bread with a tomato salsa and olive oil, fruit yoghurt and coffee. Departed on time and landed ahead of schedule. 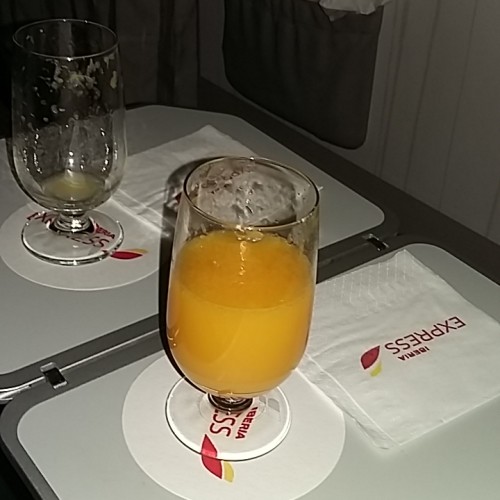 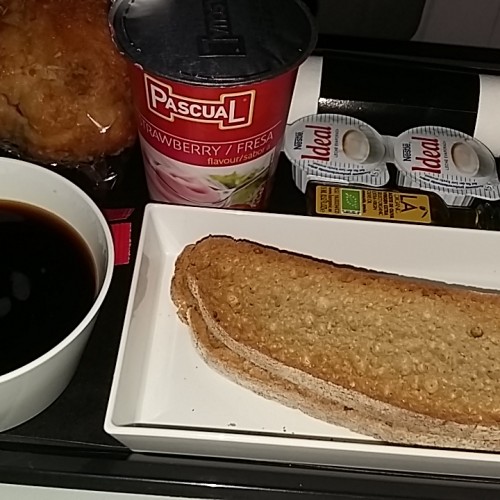 Iberia Express don't care about passengers. Flight delayed 40 minutes by a chaotic boarding process, passengers divided among 6 or 7 groups but it was not clear who had to board first. As a result passengers from all rows were boarding at once making the process very slow. They had allocated children emergency exit seats so flight attendants had to shuffle passengers around. Plane has tiny seats, poor legroom, no refreshments. There wasn't any entertainment nor screens with flight route.
1/10

"haven't heard anything from them."

I am very frustrated with the experience I had last Friday using Iberia Express service. I had a connecting flight Dublin-Madrid-Valencia. The plane was supposed to leave at 18.05, but it left around 20.30, which made me miss my connecting flight to Valencia. I had to stay the night in Madrid and spend the money on hotel and train ticket to Valencia on Saturday. What is even more frustrating that I got the email that I can take the next flight to Valencia at 6.36am - but this email was sent to me at 6.36am? I have emailed to their customer service the second I got back, but I haven't heard anything back from them. Worst experience!
51 to 60 of 61 Reviews