"Boutique was a novel experience"

✅ Trip Verified | As someone used to flying jets and on airlines that are at the very least using the branding of a larger carrier, Boutique was a novel experience but not one I’d jump for over a legacy carrier. Then again, the business model for Boutique relies on them being the only game in town for far-flung airports. My journey home from Boston began with a call from the ticket agent as I made my way to the airport. He pulls double duty as a gate agent of sorts and wanted me to call upon arrival. He then strongly implored me to bring my bag aboard. It was a chore to lug on and off the small aircraft but I managed. The interior of the aircraft was in good condition except for the carpeting, which could have used a cleaning. There are sodas and small water bottles aboard, as well as snack size bags of pretzels and the like. One of the pilots offered us some of these before we took off on the second leg. And a lesson I learned the hard way—the cup holders are not super deep so maybe don’t buy a large coffee or any other large unsealable beverage to take aboard, lest you wear some of it during takeoff. There was significant turbulence on our approaches, especially into Baltimore. Passengers can see straight ahead and through the cockpit window as the plane shakes with the runway in sight. I don’t get air sick but people who do might want to know that. I should stress, however, that I at no point felt unsafe. Boutique offers codeshare with United, through whom I booked this trip. However, you’ll want to read the fine print, since not all Boutique fares rack up United miles. 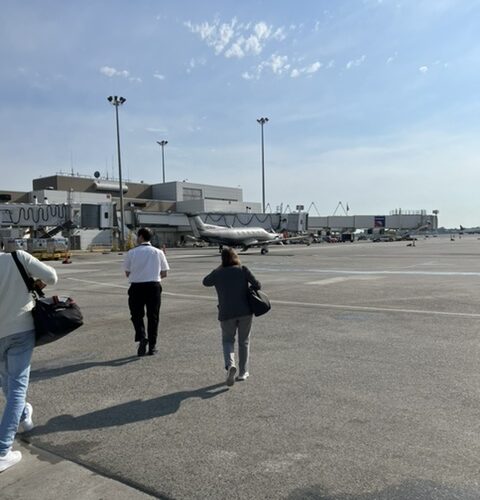 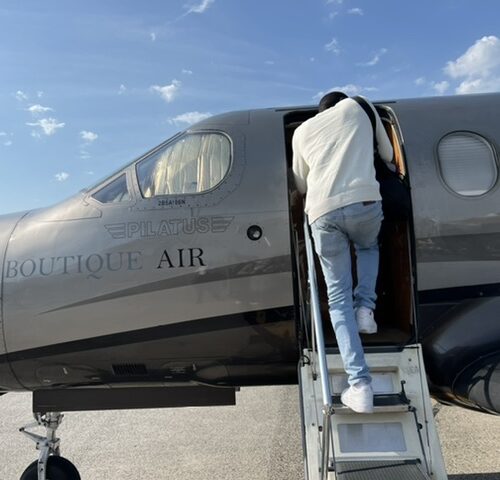 ✅ Trip Verified | They took by bag at Pittsburgh and then came out and told us that our flight would either be a few hours delayed or canceled. This was at the time of departure 5 PM - last flight out for the day to AOO (I later learned that the plane was still in AOO with mechanical problems.) Returned in about 10 minutes to tell us it had been canceled and then vanished. We were what do we do now - no one there, no bags. It took him at least another 15 minutes to return with our bags. He should have told us where he was going. No other options were given. No cars were available one way to AOO so I had to contact someone to drive from Everett PA to Pittsburgh airport which is around 120 miles away. While I waited, after waiting there 3 hours for this flight after my flight had arrived from DFW. They are so unreliable and I have been trying to get a refund on my flight or travel expenses which seem to be impossible. Very unreliable airline - no customer service.
1/10

"the employees are un-accommodating and rude"

✅ Trip Verified | This airline should be cancelled. I’ve flown Boutique several times to get to and from school. Every single time the flight has either been cancelled or delayed and the employees are un-accommodating and rude. Never flying again.
1/10

"definitely not fly with them again"

✅ Trip Verified | The flight and pilots were nice but the young woman working at the airport check-in in Burlington VT on September 14, 2021, was incredibly rude and aggressive. I can not believe the attitude she dared to have! First, she purposefully talked so quietly that it was impossible to hear her, she mumbled the entire time, grabbed my hand luggage to weight it without explaining why, which had me surprised since this was not an international flight (I realized later that it was due to the size of the plane), she asked me the most random questions without context while rolling her eyes, and when I was leaving the counter the literally hissed at me "What's with the face" while staring me in the eye - I could not believe it. I understand that everyone can have a bad day but attacking well-meaning passengers like that is unheard of! I was flying back with the same airline the next day and luckily, another woman was working that day and everything was fine. I'll definitely not fly with them again.
1/10

"two thumbs down to Boutique Air"

Not Verified | What a terrible experience! We booked our son on a flight from Altoona, PA, to El Paso, TX. The first leg of his travel was with Boutique Airlines (BA) to Puttsburgh, PA. BA said they couldn't fit my son's guitar on the plane and told him it would be shipped on a plane the next day by United Airlines (UA), which meant we would have to drive an hour and a half back to El Paso the next day to pick it up. The customer service rep offered no alternative solution other than to contact UA the next day to see if they would ship it. Then we had a text from our son saying that he missed his connecting flight in Pittsburgh because the flight departed late from Altoona and the UA connecting flight in Pittsburg left early! The UA rep told our son they left early because BA did not enter his name into the system, so UA thought all passengers were onboard! There were no more flights to El Paso that day so UA kindly put him up in a hotel and gave him a food voucher. Since the flight to El Paso the next day would have our son arriving too late to attend a planned event, we are now driving 3 hours to pick him up in Albuquerque! UA said they will arrange to have his luggage delivered to our door from from El Paso! So kudos to UA and two thumbs down to Boutique Air!
2/10

"This airline failed me"

✅ Trip Verified | I had a departing flight for on 11/23 scheduled for 6pm to see my family for Thanksgiving. Just for context, this airline has two flights departing from my local airport each day: 12pm and 6pm. On 11/23, my 6pm was cancelled. I was assured that the next-day's flight would be highly unlikely to be cancelled, so I was rescheduled for the it: 11/24's, 6pm. The next day rolls around and I get a text at noon that this flight was also to be cancelled. Great, now I can't see my family for Thanksgiving. What baffles me is that on each of these days, both 12pm flights were not cancelled. The airline definitely knew in advanced that my 6pm would fall-through. Therefore, why was I not offered a seat on a 12pm? Especially on that second day - they had a customer who obviously would have faced a second cancellation in a row, yet it didn't cross anyone's mind to offer me a seat on the same-day's 12pm that was 'On Time'. They were professional about it. But customer service is their only saving grace considering they aren't competent enough to work out the logistics of how to reliably route flights. I know this because the reason I was told both of my flights were cancelled was because "The plane got held up at another airport." Yeah, that's right....not a serious maintenance, weather, or issue with the pilot. It was because a plane got held up and the pilot didn't have time to fly (as if they had another leg after that last 6pm flight for the day). This company needs to realize that people are depending on them for their travel plans - especially near the holidays. In the real world, airlines will depart at whatever time necessary to successfully get their passengers from A to B. These guys, however, don't take their company's mission seriously enough to follow through on that task. A little hiccup here and there? Flight cancelled. A parent of mine died. It was very important that I could be home with my family to spend our first Thanksgiving together in memory of her. This airline failed me. That's no longer going to happen. But at least I got a phone call from a customer service rep apologizing and offering a refund. This company is simply going to fail, because they focus less on how to coordinate flights professionally and instead spend that effort on how to apologize to customers professionally. 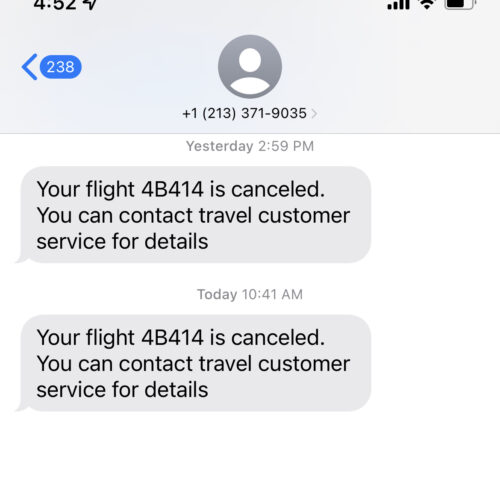 "insanely unprofessional these people are"

✅ Trip Verified | I cannot express how insanely unprofessional these people are. I booked my flight a month in advance and, having been stranded at O'Hare before, I made sure to get there hours early to ensure there was no possibility I'd miss this flight. I got a boarding pass, but became suspicious when everyone else on the flight (there were only 8 passengers) was called to weigh carry-on luggage and I was not. When I asked at the gate, I was informed that the flight was full and there was a problem with my ticket, that for some reason, I was showing up as flying stand-by. Nope. The person at the counter repeatedly asked if I was "with Dan" or "Dan's girlfriend." When I said no, but asked how I could have been issued a boarding pass if the plane was full, I got a shrug. Refusing to give up my seat, the flight was continually delayed until hours later, they told us there were "mechanical issues" and then "bad weather" and that we should all plan to be back at 5:30 AM the next morning to depart. Of course, some people wanted refunds and some of us were out $250 for hotel rooms (Boutique says they'll reimburse up to $100, but that remains to be seen). The next morning, those of us who still wanted to fly were there at 5:30, but again, delayed - no communication from Boutique, just no one present at the gate. Finally, a staff person showed up around 8 AM and as inconvenienced passengers complained about the delay, one woman, who had not been scheduled to fly the night before, laughed and said, "Well, it definitely won't leave without us. I have the pilot's coffee!" Why is that relevant? Because a plane full of people were delayed for over 12 hours, paying for food and lodging in Chicago, because the pilot wanted his girlfriend on the flight. With a full plane, there wasn't room for her as a passenger on the manifest until the inconvenience persuaded some people to go with alternative transportation. Once we boarded the plane, she sat in the cockpit with him for the duration. Unbelievable. Never again. Which works, actually, because they no longer serve my local airport after their door opened on takeoff leaving Minneapolis earlier this year. So much for that "flawless" safety record. 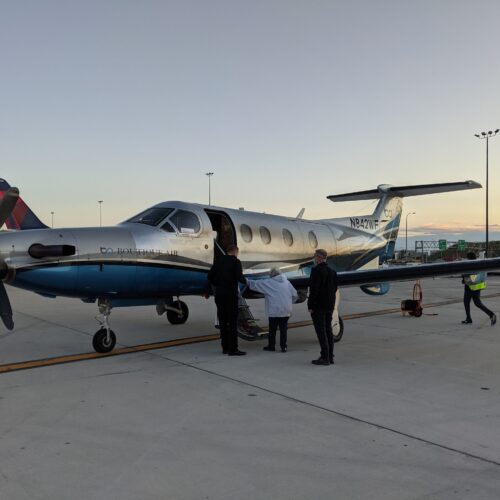 ✅ Trip Verified | This is the worst airline I have ever flown with. The customer service lady was asleep and the baggage handler) was rude to my daughter and other customers. He even made a point to loud talk a lady in a wheelchair because she didn’t get his calls. Flight delayed for 8 hours and even the chat people are rude. Save your money and time!
1/10

✅ Trip Verified | Delayed my flight last minute from Altoona to Pittsburgh due to the weather. It was a 30-minute flight and the weather was clear and sunny in both locations. I told them this would cause me to miss my connecting flight and that I'd have to rent a car. They did not even refund my $40 (petty) I was told that there was nothing they could do.
1/10

"Absolutely horrible in every way possible"

Not Verified | If you enjoy getting furious and having travel plans completely screwed then book a flight with Boutique. Standing at the airport, no notice of cancellation and customer service simply says “nothing we can do”. Absolutely horrible in every way possible.
1 to 10 of 30 Reviews