✅ Trip Verified | We had flown on Bangkok Airways from Bangkok to Krabi a fortnight before and everything was fine. In fact we were impressed by the experience. Good inflight service, tasty breakfast and on time arrival. Couldn't ask for more. Unfortunately our return journey was very different. Check in was easy and we boarded and were pushed back ahead of time. Great. Then the aircraft stopped and was boarded by a ground staff. Captain announced we were returning to the bay. No explanation, nothing. Deplaned. Meal vouchers handed out that had no ability to use at any of the vendors close by. No explanation given as to expected delay. Through questioning ground staff we found out that a technician was to be flown from Bangkok. Again, no announcement. Approx 3 hours passed and I noticed that the lounge had emptied. Questioning ground staff I found out that we were boarding, there had been no announcement on the PA system or listing on the departure gates. Prepared to forgive so long as we get there albeit 3.5 hours late. Push back. Taxi. Stop. Captain announces return to gate. Deplane. Again no announcement as to what was happening. Crowd attempts to find out from ground staff. Possibility of replacement plane coming from Bangkok so we could depart by 6.30pm. Still no announcement. Aircraft arrives and queue forms - no boarding announcement. Slow progress boarding - we find out that we will be handed a document to sign to get 1400 Baht compensation. No opportunity to read. You can sign and then board. I refused to sign. Boarded and arrived 8 hours after the scheduled time. To cap it off there was no meal / snack on the flight. A very poor experience.
4/10

"check in now by kiosk"

✅ Trip Verified | Bangkok Airways no longer has staff to help check in at Bangkok airport for domestic flights. All check in now by kiosk which don’t work well. No options for changing flights.
10/10

✅ Trip Verified | I would say that this flight felt very much like their pre-pandemic experience. Starting with check in, me and my dad both have Premier Plus status so we checked in at the business class counter very swiftly and with little fuss, we showed them our vaccination records which were no issue. All our checked bags were tagged with the priority tag. There was a considerable queue for check in - there were plenty of flights in the morning. Since Bangkok Airways provides lounge access for all their passengers, we headed there first, but being premier plus members we were able to access the business class section. We had a corner to ourselves with a very comfortable couch. The rest of the lounge can be described as a bit dark, but with a cosy atmosphere with pastries, Thai snacks, crudités and a few hot meal options made-to-order. Everything you can expect from a business class lounge. Boarding was handled quite well, and they used new boarding pass-scanning machines. This flight was near capacity, 142 seats out of 144 available on the A319. We were a family of four so we had seats 1CDE and F. There was somebody seated in 1A and the only empty seats were 1B and a middle seat in the last row. On the return the load was much lighter and I had the whole row 2 to myself, with the rest of the family in 1DEF. The first flight was operated by a slightly older plane, had a slightly tired interior but the seats were well padded, and the interior was clean. The second flight was operated by an ex-Royal Jordanian aircraft. The only indication that it used to be operated by RJ was that the door handles were in Arabic, otherwise it has been fully refurbished. The legroom was average, not unacceptable but not spectacular. This plane was relatively new and was spotless when we boarded. The service was the highlight of the flight. A hot meal was offered with a bowl of fruit. On the outbound the meal was a baked fish in white sauce with baked potatoes which was pretty good, on the return it was a very tasty chicken lasagna. The quantity of the meals is a bit small - understandable since they expect that passengers would eat in the lounge. There was a drinks cart that consisted of red and white wine, beer, soft drinks and coffee/tea. The wines were of particularly great quality. Service was quick and all the flight attendants were very polite and professional. Our bags being tagged priority meant that once we were through immigration, all our bags were waiting for us and we headed straight out. On the return leg check in was painless and the third party lounge in Da Nang airport was spectacular - different creative seating options, lots of delicious hot and cold food options, and a nice, airy feel. Overall, it’s easy to see why they have won the awards year after year. This flight in particular shows that they are willing to give passengers a great experience as if it was 2019 again. Finally, because we booked this trip a month early, we paid a similar price for the flight as a low cost competitor (flight only, no extras), so this was excellent value for money.
9/10

"a very good product for the price"

✅ Trip Verified | As others have noted, the airline is very good when it comes to being on time, which is a rarity in Thai society and life in general in the kingdom. Both cabin and ground staff conducted themselves professionally, unlike several other short-haul carriers, and it’s easy to see why Bangkok Airways stands out among them in a positive light. Somehow the aircraft was configured in a single-class configuration so everyone rode in coach. Legroom seemed to have diminished from the last time I flew with them 5 years back, so that was one sore point. Still, a very good product for the price which is just a few pennies more than what other airlines are charging.
7/10

"truly get a feeling of luxury onboard"

✅ Trip Verified | Da Nang – Bangkok 11 Sept. on an A319. Flight on time. No luggage problem, had paid a hefty 40 $ tag for extra 5 kilos as I know they can be strict. Rigid luggage allowance of 20 kg. If additional kgs are purchase beforehand it is 80 USD/20 kg, which is almost the value of an additional ticket. Wonder the price if purchased at check-in? Must be a fortune despite the flown is of short duration, an only 90 min. flight, Check-in online is impossible and depraving a lot of time for nothing as it is impossible for any international flight. Why is this no announced instead of wasting peoples time with dozens of information boxes to be filled on approximately 15 screen windows? Shame on the airline, this misleading scam has going on for at least 10 years. FFP useless. Partnership with Qatar Airways (my connecting flight) did not even allow for luggage transfer in Bangkok. Very annoying, meaning wasting 2 hours passing immigration, check-in with QR and back to airside through immigration and security. Very disappointing, exhausting, tedious, and inconvenient like on a LCC like their competitor on this route: VietjetAir. Lounge access not granted and all frills from me being QR gold FFP were ignored (lounge, luggage, etc.). So, the partnership is a joke, cant even work with luggage. Onboard, I immediately felt the good atmosphere. FAs were in a splendid mood, well rested and service minded throughout. Special Sea Food meal ordered delivered to perfection (red snapper). Ordinary hot meals were also good, given out as courtesy to those wanting. I tried a chicken pasta which was truly delicious. Plenty of food onboard, despite small portions. Plenty of drinks offered frequently with a good flow and usually given more than one unit of each. Wines were unusually good quality and I managed to get quite tipsy, which was appreciated. Coffee and tea undrinkable and subpar. Cheap fares, truly get a feeling of luxury onboard. Paid 114 USD for a 1-way ticket was a find!
9/10

✅ Trip Verified | They deserve to be called Asia's favourite boutique airline. Everything about flying Bangkok Airways was a pleasure. From efficient check-in to friendly staff on the ground and in the air. But, most importantly the comfort of the business class seats. They are from an era in aviation when comfort was king. Okay, so there was no in-seat entertainment screen - but who still needs those anyway? 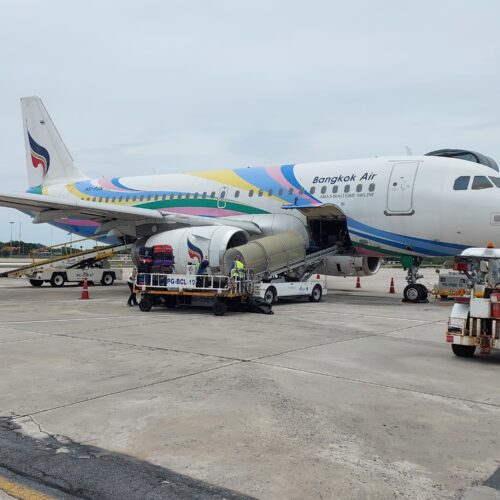 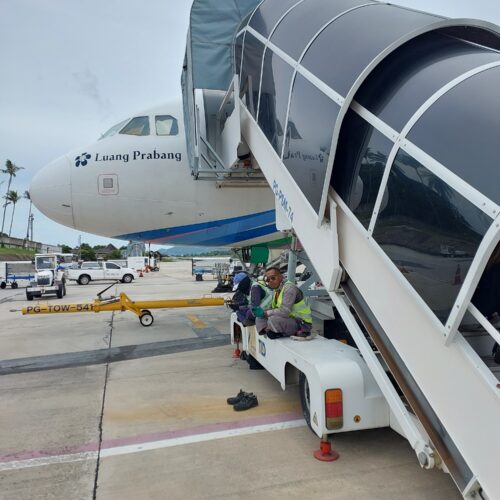 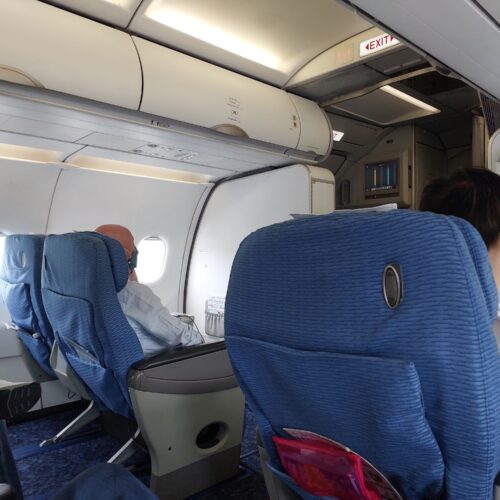 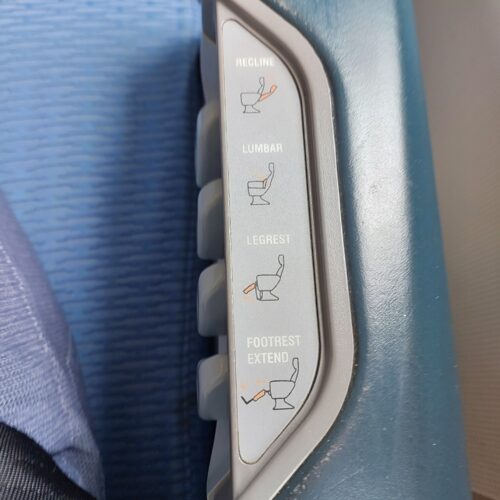 "luggage nowhere to be found on arrival in Phnon Penh"

✅ Trip Verified | All of my and my daughter's checked in luggage (3 pieces) are missing. We traveled from Brussels to Phnom Penh 24 June. Our Turkish Airlines flights to Bangkok were delayed, and we arrived in BKK at 4:12 pm and boarding for the codeshare flight via Bangkok Airways was at 4:30 pm 25 June. We made it to our flight by running and asking favours from fellow passengers to let us go first in the queue in disembarking and in the security check. However, our luggage were nowhere to be found upon our arrival in Phnon Penh 25 June around 6:35pm. I wrote to Turkish Airlines and they said this was the responsibility of Bangkok Airways. I emailed Bangkok Airways and they said they never received our luggage. Afternoon of 26 June, I received an email from the Bangkok Airways tracing team that they have located our luggage in Bangkok and that they will send it via the flight that will arrive in Phnom Penh at around 6:35 pm and that the Bangkok Airways Representative in Phnom Penh will get in touch with me. Anxiously awaiting, I tracked the flight and noted that it landed in Phnom Penh 6:32 pm. I have not heard from the representative at all. I wrote another inquiry to the tracing team at 8:30 pm and they said they have forwarded my email to their Phnom Penh Team. It is now 27 June, 9:09 am and I haven't heard from them yet. Neither have I been advised regarding what to do, in terms of securing clothing and toiletries, in the interim that our luggage have not yet been brought back to us.
10/10

✅ Trip Verified | I do like flying internally with Bangkok Airways. You pay just a small amount more, but get a more better product and service. Always on time, crew are always perfect. The on board snack was given as you left the aircraft, which was great to get a bottle of water in the red hot heat of Krabi.
1/10

"What was their standard and procedure?"

✅ Trip Verified | The flight to Bangkok was delayed around 2 hours. Then there was a new flight to Bangkok, but the ground staff rejected us to move to the new flight while other customers could get in. This was unfair. Even though we informed them that we had an important meeting and got affected from the flight delay, they insisted not to let us in. What was their standard and procedure?
10/10

"want to thank Bangkok Airways for their time"

Not Verified | I just want to thank Bangkok Airways for their time and accommodations with my flight (which was booked by agent without understanding of the specific requirements for the flights in Thailand during the pandemic) especially the manager on arrival who helped me a lot to change my flight (unfortunately I didn’t ask his name). I didn’t get the same service from Aeroflot and particularly from Finnair. The manager went toward me and helped me to change my flight for the right one, if all airlines will be working like that it will be easier to fly, specially at present time during pandemic (which already makes tourism very difficult for passengers). Besides that, everything in airport was very good organized and done for the people on arrival not like in Europe.
1 to 10 of 394 Reviews