"I was exhausted and had no one to ask for directions!"

Not Verified | Before I arrived, I called to check on parking. The last time I was there the sign pointed straight ahead for Terminal B parking. Didn't know you had to drive all the way around the airport to find Terminal B because there were no more signs. So, the operator who answered was very condescending and impatient. As if I was taking up his time. The place can be very confusing if you only use it every couple of years. I took the "shuttle" to the terminal. On the way home, in the baggage area, a sign said "shuttles" with an arrow. I walked and walked and walked with my bags to where there were buses. I asked which one to Terminal B parking. They were all buses to hotels! I was exhausted and had no one to ask for directions! They need people in booths or walking around who can answer questions!
2/10

Not Verified | I fly frequently in and out of Nashville Airport and don't really have ever any problems until today. My kids were in town and I had to take them to the airport for the return flight home. They are Minors so I went in with them to make sure they got on board the plane ok. I parked in the parking garage for less than 2 hours and was charged a full 1 day rate of 26 dollars. That rate kicks in at 45 minutes. I believe that is absurd. I don't have a problem paying to park but don't feel like I should have had to pay the full day rate. Don't get me wrong it isn't that I don't have the funds but it really the principle of it. I usually park off site because the rates are better and the shuttle service is better as well. I feel the full day rate shouldn't kick it until about 3 or 4 hours in the garage. I mean if you parked and took a flight somewhere it would take 3 to 4 hours to get there and back without really getting off a plane. So I turned in a complaint to the airport and was basically told tough luck. So my sentiment is Nashville Airport your customer service sucks. Do better. Not to mention the entire airport is a construction site inside and out.
3/10

Not Verified | I just dropped my Aunt off at the airport to catch her flight. I was parked for 5 min max with my Caution lights on in the terminal. As soon as I unloaded the car and told her goodbye, I got back in the vehicle and the traffic guy (about 60yr old) is yelling at me to move. I said I’m about to move I’m just starting my GPS, which takes 1 min. He then proceeded to come up to my window and yell and tell me “I don’t care what your doing, you can put your GPS on somewhere else. You need to move.” By this point I could’ve been done and gone if he wasn’t causing an issue over me dropping off my relative and only being there for 5 min. I know his job is important. I know it is important to try and keep traffic going so it doesn’t back up. What I don’t agree with is being rude while doing it. Everyone is there to do the same thing. It isn’t going to make things better, or traffic go any faster, by being rude and inconsiderate of others. Very disappointed and very disrespectful. He needs to be written up for this.
2/10

"Seriously BNA get your act together"

Not Verified | I have flown many times out of BNA never that much of a problem until this last flight, I would have driven to my destination had I known what a mess it is, now don't think I want to fly out of Nashville ever again. I was over 2 hrs early and only made it to the gate with 1 hr to wait. What happened to all the quick places to grab some food? Seriously BNA get your act together.
5/10

"on track to reinvent our outdated BNA airport"

Not Verified | In the heart of the South, on track to reinvent our outdated BNA airport. I have a question. Why is there no where to buy a Mountain Dew, Sun Drop, or Mello Yellow? I mean this is the South correct?
1/10

"No employees enforced the mask rule"

"there were so many people not wearing masks"

Not Verified | Although there were motivations in place and visible—there were so many people not wearing masks and the airport authority did not seem to care. I brought my own Lysol wipes and glad I did. I tried to sit in a chair but when I wiped it down the cloth showed so much grime and dirt that I ended up standing while I waited to board and I was pretty early. Cleaning crew were standing around talking on their phones while germs are having a field day on every surface of this airport. I live in Nashville and used to fly frequently. However now I’ll be seriously thinking twice about travel!
1/10

Not Verified | I thought I was in a 1970’s low budget film. This place has outdated, smelly, nasty carpet, broken seat and 2 1/2 restaurants. I may be stretching it on the 2 1/2 restaurants but what few restaurants they do have are very poor. 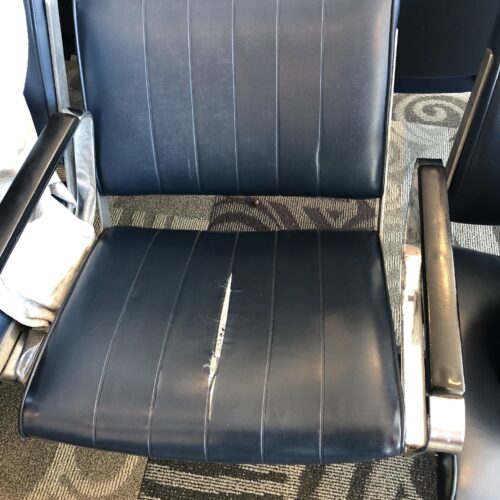 "Lack of places to eat"

"the airport is supposed to be prepared for planes to fly!"

✅ Trip Verified | We came to Nashville to visit. There was bad weather when we left, so I can understand that these may be special circumstances. That being said, all flights were cancelled little by little. They kept you in the airport for as long as possible. 1 restaurant that sits probably 30 people, 2 stores that were poorly stocked with disgusting sandwiches, 1 small bar. Al this to serve hundreds of people that are waiting to see if their flights will be cancelled or not. Finally, after 24hrs of being moved around from gate to gate and delayed, they got us on a plane. The pilot explained what led to all the delays and why we are still delayed. The Airport has only 1 Defreezer truck. It can de freeze 1-2 planes then has to go refuel, which takes 2 hrs. So, we were waiting for our turn to be defreezed. After about 20 min, the pilot gave us an update saying that the defreezer has a malfunction and the tech is coming to fix it. A little later, we got an update that said: well, I can see that there is only 1 person loading the luggage’s, so this may take a little while before we can even move the plane. In the meantime, we are still waiting on the update for the defreezer. A few minutes later, the pilot says we just found out that the mechanic is on his way and should be there in about 30 min. Damn. I’m not sure what is going on, but the airport is supposed to be prepared for planes to fly!
1 to 10 of 27 Reviews