"told me my bags were too large"

✅ Trip Verified | Manchester to Seattle. My worst connecting flight experience ever. They forced me to pay $200 extra dollars at the gate. They told me that my bags were too large to be carried on. I had just got off a connecting flight with SAS. They told me that I could have avoided the $200 bag fee if I would have checked my bags in. There was no where to check your bags in, you literally are just dropped off and go find your next gate. After paying the $200 for two bags, I board the plane and the over headbins are very empty. This is ridiculous.
6/10

✅ Trip Verified | Gatwick to Heraklion, MT 1178 (6th September 2019) left a little late, but it made up some time-the meal which I had pre-paid for arrived almost three hours into the flight, no water was offered, or wine, just a weak flavoured tea, which didn't really quench my thirst. This was very disappointing, I expected more. The aircraft seemed very cramped inside. The take off message during the safety demonstration was very mumbled. The flight was ok, it would have been nice if the flight destination screen's had been switched on. Once through passport control and having collected my case, there was a row of coaches outside the terminal, and even at 10pm, the place was very busy. On return, arrived at Heraklion Airport. Packed with people, no where to sit, as we waited for a delayed flight back to Gatwick. This time the flight destination screens were switched on and off in between an old episode of an American sitcom. I had to ask when the food was coming, as it had been several hours since my last meal. Again, no water or wine was offered, only another cup of flavourless tea. It seemed that duty free sales came first, The flight was okay. 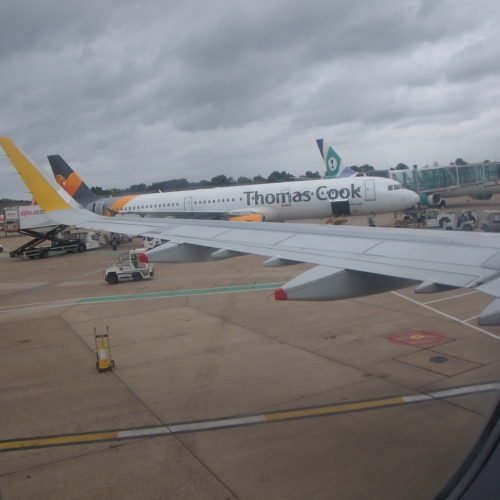 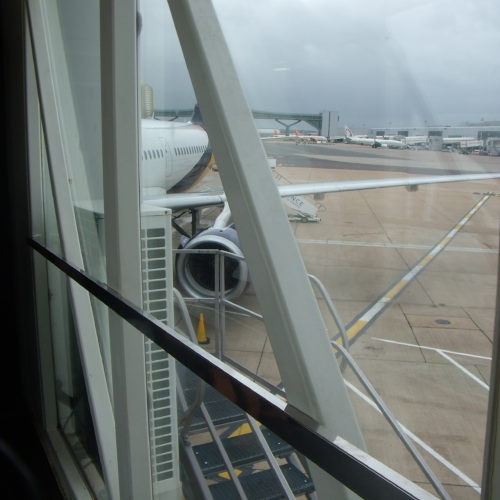 Not Verified | Zante to Glasgow. First time in 5 years flying Thomas Cook, so was unsure if it would be as bad as the previous trip, We got to Glasgow Airport two hours and a half before takeoff, to be met with a queue of hundreds at the TC Desks, two checkin desks open, utter chaos, finally got booked in after an hour and 15 mins, They had to ask people on the Corfu flight to come forward as they would miss there flight if they had stayed in the queue, We got checked in, then up and joined the queues at Passport Control, got through eventually and got into the departure lounge in time to grab a cup of takeaway tea, as the flight started boarding, Not a good start, But the Flight left bang on time, 6.30am, We had ordered pre booked meals, these were served after a drinks round, which left no where to put your meal down, utterly bizarre, We usually go with Jet 2, who serve meals first, and you get a choice, Thomas Cook just get a meal placed in front of you, no choice at all. It was Breakfast so was not too bad, and the flight was actually ok, Just need to sort out the boarding / check in procedures and maybe give people a choice of meals which you are paying for. But as for flights both were ok, home leg from Zante was 45 mins late, but no big deal.
10/10

"Excellent flight for a cheap price"

✅ Trip Verified | Orlando to Manchester with Thomas Cook Airlines. A low cost airline which provided a really good experience, especially given the very low price of the ticket. The flight departed one hour late, but caught up and arrived on time. Food was really good. The entertainment was limited, only a few movies, but good. Excellent flight for a cheap price.
4/10

✅ Trip Verified | Bristol to Larnaca. A320 of Smartlynx Airlines painted in Thomas Cook colours. 2 hours late leaving Bristol, the luggage was on board but apparently the computer had deleted it off the system. The luggage had to be unloaded and matched up to the passengers then loaded again. Seat the most uncomfortable I have ever sat in, crammed in like sardines. No hot water on the flight so no tea or coffee, also ran out of ice halfway through the trip. Cabin crew were very pleasant but oddly had a rest break halfway through the flight. I will not fly on this airline again if I can help it.
2/10

"rubbish for the amount of money paid"

✅ Trip Verified | Manchester to New York with Thomas Cook Airlines. Absolute rubbish for the amount of money paid. Uncomfortable seats that do not recline and very hard. Angle of seat causes neckache, with only a handful of movies for free (6) and old. No free beverages only with dinner:- tea, coffee (no decaf, good job I had my own) squash, pop and water. Came around twice for a long haul flight of 7.5 hours. Thought we got sandwiches before we landed - a dismal flapjack and small cup of water. I wouldn’t fly with them again nor would the people I was with.
6/10

❎ Not Verified | Plovdiv to Belfast. It was a decent airline. The seats where mildly uncomfortable though and the free food was disgusting except for the mousse you got in a pot and the lemon muffin as well. The flight staff were nice enough, they didn't talk much but there was one flight attendant who was nice. The food that was actually decent thought was expensive Seriously! £4 for a hot beverage and some shortbread, and it claims to be 'competitive prices' no way! I guess this airline is sort of 'fly us if you are broke yet want to go on a holiday.' And they also don't have anywhere to charge your phone and they don't have wifi either. Not good. Overall if you are flying this airline, bring about £15-£20 for the flight because the actually nice food is expensive. Maybe would recommend to someone who doesn't have the money to fly with other, more expensive airlines.
1/10

"spare yourself the agony"

✅ Trip Verified | Manchester to San Francisco with Thomas Cook Airlines. Absolute trash for the amount of money paid. Very hard, uncomfortable seats that cannot recline. Angle of seat causes neckache, broken handle on seat and only a handful of movies for free. Plug for headphones defective. Lack of free beverages. Absolutely unfit for a long haul flight of 10 hours. Do not fly with them and spare yourself the agony.
1/10

✅ Trip Verified | Gatwick to Larnaca. I was shocked with the treatment of staff at Gate 1 right before our departure. I had already checked in my 20kg luggage and had my cabin luggage weighted at the check in before (a cabin luggage sticker was placed on my cabin bag). Upon arriving at Gate 1, a member of staff Becca weighed our cabin luggage together with our laptop bags and the total weight for each of us was 12kg instead of 8kg. Okay, I understand that we were overweight, but she then asked for my credit card that I made my booking with. At that time I thought that she wanted to confirm my booking so I gave it to her. She then told me that she wasn’t able to get a payment from my card. She tried to charge me without telling me! She insisted 3-4 times and was very rude. She took my credit card from my hands and when I was asking her of what she was doing I didn’t get a reply! Really, is this your customer service? She told me the extra charge was 65£ but then charged me 130£ Without telling me and I saw it as soon as I boarded the plane! Why were we treated like that? As we were the last people to board the plane we payed 130£ for that extra 4kg, so that we didn’t cause any further delay of the airplanes departure. I personally felt insulted and found her behaviour impolite and disrespectful.
1/10

"such a poor bunch of staff"

Not Verified | We have just returned from Dalaman on Thomas Cook flight MT105 into Gatwick and after 50 years of flying I have never encountered such a poor bunch of staff. We paid for something called Economy Plus which the cabin manager Leanne obviously resented anyone having. Our food was late and had to be prised from the staff...apparently there was some error on the paperwork and we could not have our meals until it was sorted. On a 4 hour flight we not even offered a cup of coffee, a rude member of staff told us they were too busy after they had taken a 'compulsory break' during the flight! We asked for a cold white wine and were told there are no fridges on the aircraft and the ice had run out - in row 2 and service started from the front. In the end we decided to press attendant button and it took 7 minutes for anyone to appear from behind the curtain where the cabin crew were busy munching their food ... a good job it was not an emergency. When she appeared and we asked for our 1st cup of coffee .. some two and half hours into the flight we were told that the sale of duty frees took priority and IF they had time after we may be able to have a cup of coffee - 2 passengers sarcastically asked what the sachets of milk in their meals were supplied for. There were other passengers saying exactly the same as me, Thomas Cook never again. It just seemed like the staff were sure their jobs were going sometime soon and really couldn't care less. This great British airline appears to have given up hope and the whole experience reminds me of the last few months of Monarch airlines and look how that ended. A total disgrace and some employees of Thomas Cook need to take a long hard look at themselves after this dismal performance!
1 to 10 of 642 Reviews