✅ Trip Verified | This was my first flight on Kenya Airways. I was impressed with the service, cleanliness and punctuality at the airport as well as on flight. I would highly recommend the airline as a customer friendly choice.
2/10

"it's my worst experience"

✅ Trip Verified | I recently had a trip to Dubai on the 10th of July 2022, it was a Linking flight from Cameroon passing through Bangui to Nairobi Kenya then to Dubai. Honestly speaking it's my worst experience so far, it's been almost two weeks since I arrived Dubai but am yet to receive my luggage. Before leaving the airport on arrival I placed a complain with Dnata baggage services regarding my baggage and I was assured that I would get my luggage in less than 48 hours which have turn into two weeks have finished every penny I had on me for mobile top up and when I even call no 1 picks no get back to me, have sent emails and gotten no reply. Maybe next time you inform customers in advance that their luggage aren't safe or secured so they would know what to do with their luggage. Would never recommend this airline to anyone unless they wish to have a similar experience. what a waste of my money.
2/10

"Everything today was pathetic."

✅ Trip Verified | KQ257 from Antananarivo getting late for more than an hour causing passengers missing connections at their own costs with bad customer care and in addition, poor bag management. Passengers losing bags with bad tagging. We had to spend more than 2 hours waiting for baggage tracking. Incompetent staff on duty with no respect towards passengers. Everything today was pathetic.
10/10

✅ Trip Verified | I highly recommend Kenya Airways, their services are excellent, especially their cabin crew, very efficient. My trip to and from Bujumbura to Johannesburg was very smooth. 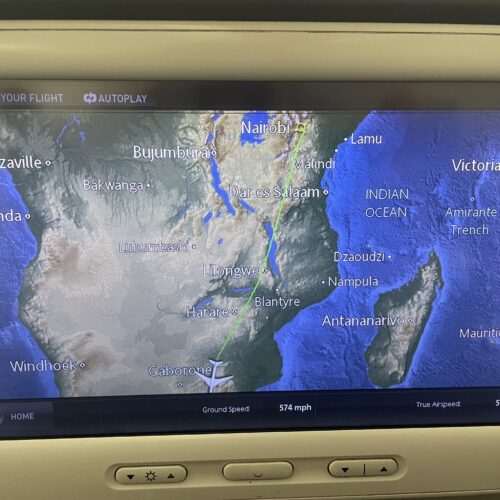 Not Verified | I have never seen such an ill-functioning airline. The airline people took 1 hour to check my documentation and after issuing my boarding pass they informed that the flight is delayed by 3 hours which left me no choice but to stay at the airport for more than 5 hours. The airline was least bothered with the inconvenience and didn’t do anything to compensate this. I will strongly suggest never fly with them.
1/10

"They treat people with absolute disrespect"

✅ Trip Verified | I have never flown on such an inconsiderate airline. I am appalled by the service. The flight from Paris to Nairobi was delayed, which meant I missed my connecting flights to Johannesburg then to Cape Town. This did not seem to worry them and they said it would be at my expense to rebook another flight to Cape Town. This is the fourth time I’ve flown Nairobi airways and all four times they were late and caused subsequent missing of flights. This airline should be shut down! They treat people with absolute disrespect!
1/10

"if you can avoid it, do not fly on Kenya Airways"

✅ Trip Verified | This is the worst airline I have ever flown. We booked roundtrip direct flights to Mauritius to and from Nairobi for our honeymoon. We planned to spend 7 days in Mauritius. The night before our flight from Nairobi to Mauritius, I was emailed (yes, emailed) at 11.19pm while I was sleeping to inform me that our flight time was to be changed from 1.00pm to 7.30am. As I was understandably sleeping at the time, I did not review this message until I woke up at 5.30am that morning. I was staying in Naivasha, Kenya at the time and so did not have time to make it to the airport. We immediately called due to the fact that we were going to miss our flight and no one was able to explain to us why this change was made so last minute to the flight schedule and why we were not informed ahead of time. I would think it would be common sense that an email in the middle of the night 8 hours prior to the new proposed flight time (for a now 7.30am flight) is insufficient notice. Even after speaking to multiple different Kenya Airways employees, I was never given a reason for the flight time change (just "operations"). Ultimately we were rebooked for a flight late that day, but this was an indirect flight through Dubai, which didn't leave until 5.10pm and involved >16 hours of travel instead of what was supposed to be a 4 hour and 20 minute flight. Because of this, we were unable to check in for our hotel that we had paid for the night of our arrival and instead arrived the next morning, exhausted, having been traveling all night and transferring in Dubai in the middle of the night. To boot, the behaviour of the passengers on the plane from Nairobi to Dubai was absurd. People were constantly standing up on the plane and blocking the aisle even after being asked to sit down by flight attendants. Kids were running around unrestrained and flight attendants had to ask over the intercom for parents to restrain their children multiple times. In the row in front of me someone was watching a movie on a tablet with nonstop gunfire with the volume on max and he was not using headphones. To top it all off, in addition to missing our first night of the trip, Kenya Airways also changed our return flight time, moving it up from 7.10pm to 1.40pm. This effectively compromised two different days of our trip (as we were unable to do much the morning of our departure and were unable to take advantage of the late checkout that we were qualified for at our hotel). On top of it all, our return flight was ultimately delayed by 40 minutes and the process to check in our bags took an absurdly long time, longer than it has ever taken for any other flight I have been on. We had all of our documents and it still took us >10 minutes to complete the check in process and this was after standing in line for one hour waiting for the check in desk. Bottom line, if you can avoid it, do not fly on Kenya Airways. You will absolutely regret it. We contacted customer service multiple times and they have absolutely refused to make amends or compensate us in any way for destroying our honeymoon.
1/10

"Worst airline I have ever flown"

✅ Trip Verified | Worst airline I have ever flown, customer service is the worst. Their agent are rude and mean, not helpful at all. Do not fly this airline, especially via Nairobi. Food is terrible, seats are nearly broken in the aircraft
1/10

✅ Trip Verified | Flying from Lusaka to London via Nairobi last month with Kenya Airways was a shocking experience. Pre-departure tests are no longer needed upon arrival to England. However, my instinct told me to check if I needed a PCR to transit through Kenya. The COVID information on the Kenya Airways website is extremely misleading. When I filled in all the details about my trip, it said nothing about a PCR test; however, when I spoke to an agent on WhatsApp they said I need a PCR test as I am not vaccinated (screenshots attached). Having to rush around Lusaka the day before I flew to London, I eventually got a PCR test. I arrived at Lusaka Airport at 23:30 on Sunday and did not get my bags checked in until 01:10 on Monday (5 minutes before baggage drop off closes) due to the airline and staff's poor customs. I knew my bags were overweight and decided to pay the additional cost rather than repack. I was told that I cannot pay using card and can only pay in Kwacha or US Dollar. I had £100, which was roughly the additional cost and it took over 45 minutes for the staff to find out whether I could pay using British Pounds and inform me. The ATM I was advised to go to outside on the bottom floor of the airport was out of service and I had to run to the domestic airport (10 minutes from the international airport if you're in shape) to withdraw cash from the second nearest ATM. The total amount was 2066 Kwacha and when I presented 2100 Kwacha, I was told they did not have any change... If you are travelling to Southern Africa, Ethiopian Airlines is a much better airline and I can see why more people prefer them over Kenya Airways. 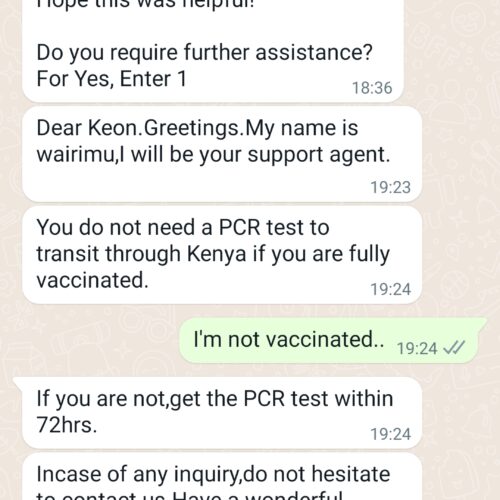 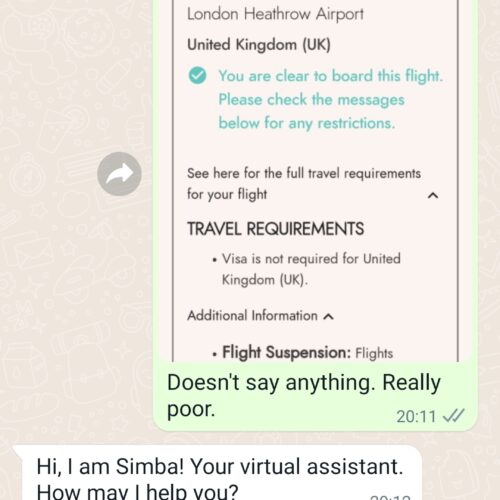 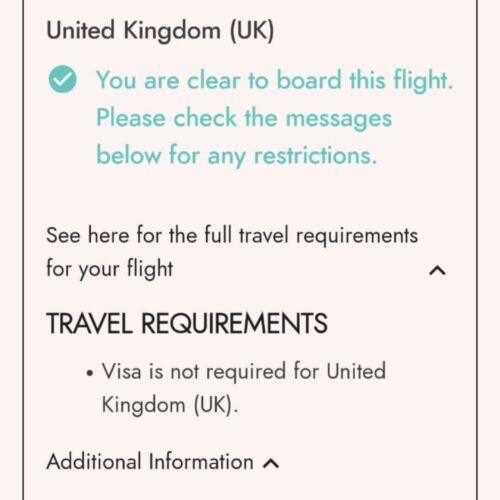 "Pride of Africa? Not by a long shot!"

✅ Trip Verified | Checked in online the evening before the flight. Aircraft depicted was a 737-800. I selected and paid for an exit row seat. A couple of hours later, I received a text message saying that the flight was going to be delayed from 0745 to 1120 for the usual ‘operational reasons’. On arrival at the airport the next morning for the delayed departure, I was issued with a boarding pass that still showed my original seat number of 19A. As it turned out, the airline had changed the aircraft to an Embraer 190 (which I discovered when we were boarding), so while I had the same seat number from the original 737, it was not in an exit row on the E190. No apology, no information at check in. Boarding was chaotic as usual. They called for Business Class and Priority passengers to board first (I have Siver Elite status), only for everybody to end up on a bus that waited until it was full before proceeding to the airplane. So much for priority boarding. Even with the delayed departure time, the flight was delayed even further, departing at 1220. KQ is a disgrace. Unfortunately, they are currently the only airline serving the Nairobi-Johannesburg route and are milking this for all it’s worth with shoddy service. Pride of Africa? Not by a long shot!
1 to 10 of 382 Reviews