✅ Trip Verified | Cebu to Dubai via Hong Kong. The flight was delayed by more than an hour in Cebu but the consolation is that we were upgraded to Premium Economy for Cebu-HKG route. I hate delayed flight, they did not provide any drinks or snacks, fortunately, I have access to the Premium Lounge courtesy of my MC. The flight was comfortable, the legroom and the seat pitch was good enough. The HKG-DXB route was not quite interesting, food served was bland and the plane cabin was not neat as expected. The handling of the crews aboard the flight is very average.
7/10

"very little to boast about"

✅ Trip Verified | Hong Kong to Washington. Transit in Hong Kong on 31st August after arrival from KUL. Premium Economy on Cathay Pacific does not allow lounge access. Boarding process was a mess. They announced boarding was about to start and pax were lining up but then delayed boarding for at least 45 minutes citing security issues. In the meantime, I was questioned by a young security staff asking me silly questions about my trip. He was rude and repetitive and cold hardly speak English. When we finally boarded, the flight was delayed and only left the gate about 50 minutes after departure time. On board, the PE seats are a fail in my opinion as they are definitely not 20 inches wide and appear no different to an economy seat in terms of width. I have flown Premium Economy on the Cathay Pacific 777-300 and although they are older type seats, they are wider. The seat pitch is good as is the recline but when the passenger in front has their seat reclined, it gets very tight. The leg rest is a bonus and as I was in a window seat, the seat is jammed right against the window leaving no space to store blankets etc. The IFE was good and very responsive. The screens are large and crisp and there are additional storage spaces below the IFE screen. The seat pocket is very low down and limited in what it can hold. Basically storage is a problem. The food is the same as economy, small portions but I ordered a kosher meal which was delicious and plentiful. The staff were pleasant and better than the KA staff o the previous flight and were present throughout the flight. There were snacks available during the flight but the offerings were limited. Deplaning was was uneventful. Overall, Premium Economy has very little to boast about when compared to economy on CX. 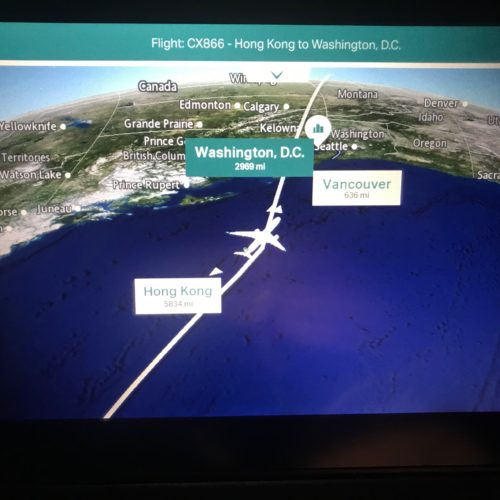 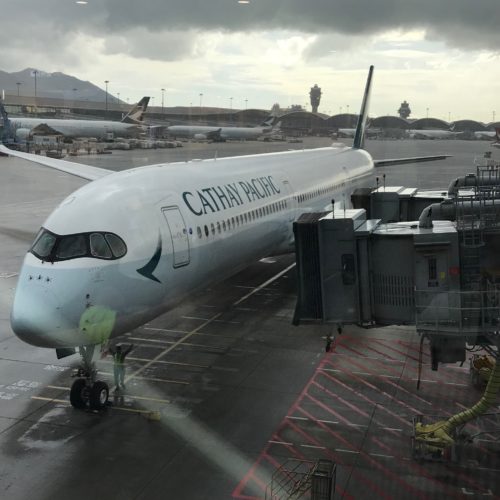 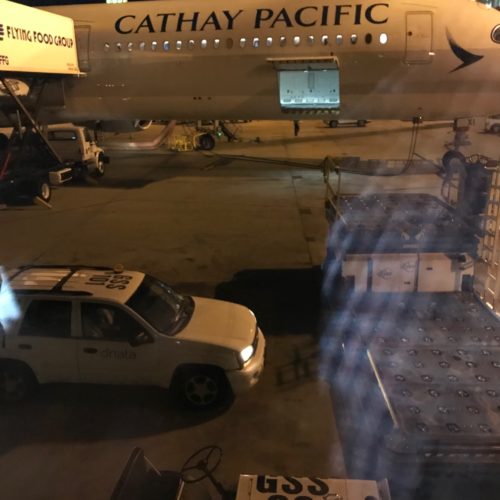 ✅ Trip Verified | Hong Kong to Singapore. The experience is nice. The premium economy seat allows me to lying down to a large angle (much better than economy seats). The space between each seats are greater. Noise cancelling headsets are provided. It's worth the price especially if traveling on long distance. However, the meal is too simple, even comparing with my economy experience on the same route a few years ago.
10/10

Not Verified | Gatwick to Hong Kong. Im a CX gold card and lounge access at BA given. Boarding fast, lovely welcome, seat in PE great, loads of space. Food really tasty, snacks, noodles delivered quickly. Captain informative and after slight delay, we arrived on time. Crew are good, a lot is expected of them and they deliver. Big negative is new 'print off your ticket and bag tags' procedure. Its not that clear how.
2/10

"most disappointed in Premium Economy"

✅ Trip Verified | My husband and I flew from London to Hong Kong using Cathay Pacific We were most disappointed in the Premium Economy seats. Our seating was at the back of the section actually in the economy cabin with a curtain drawn only after dark between us and the front row of Economy by using an angled curtain. The flight was uncomfortable because the leg rest would not fold back under the seat properly and the footplate which is minimal spun around so it was difficult to keep the feet on straight footplates. Staff did their work pleasantly but were not in evidence after the meal was served. One had to locate a remote control for being able to call a staff member and the remote control was not immediately evident being by one's thigh so it proved difficult or impossible to get staff attention without this knowledge. As a concession to Premium Economy, a fancy printed menu was received for the meal but when the meal arrived not only were they out of most options but the grey sludge which appeared as the remaining fish dish was most unappetising. As I was next to the economy passengers there appeared no difference between the meals in each cabin although I think there must have been some slight difference. Premium Economy is that only in name in Cathay Pacific. There was minimal extra room between seats and it was very difficult for the person on the window to climb over the person on the aisle to go to the toilet. We had also done the Hong Kong London sector going and the comments are the same. Premium Economy is Economy with a new name - I would not waste my money again.
3/10

"the service was unhelpful"

✅ Trip Verified | Adelaide to London via Hong Kong. After paying almost double the cost of economy I believed premium economy would just be a little better all round, not so, the seating was a little better but the service was unhelpful. By the time economy had been served the choices of courses were reduced from three to one, there was no brandy and and only one choice of wine and no champagne on boarding as offered on your website. Items on the menu were not available, and at no time did the crew approach me for drinks or snacks. I'm hoping the return flight to Adelaide on 9th August has improved.
3/10

✅ Trip Verified | London to Hong Kong. I was able to get a last minute ticket to Hong Kong with Cathay Pacific Airways and it was very good price. The pro is 4-5 flights a day from Heathrow to Hong Kong and onward to many Asian cities. Service and product is consistent. However for a premium economy passenger (I often fly their business class and find it underwhelming) I think other Asian airlines do a much better job. The seat is comfortable but very dated. On my return journey the economy class cabin had received a make over - with more seats squeezed in but also new IFE installed. Premium economy meanwhile still had the old IFE and old deco. I also found Cathay Pacific entertainment very limited. Catering onboard was not good. I always eat in the lounge when I fly with CX and skip meals onboard. Even their business class meal is not up to standard let along Premium Economy offerings. I also found service deteriorating. Most of the crew were robotic and just about to manage their tasks. Also depends on your luck. On some of the 777 premium economy you have to go to economy class to use the toilets. And when you reach there the toilets are not clean. Overall if you want a good flying time then CX is good, otherwise if you are looking for a good travel experience go with SQ, BR and CI.
3/10

"not use business class washroom"

Not Verified | Singapore to London via Hong Kong. If you are going to pay more for travel, you might as well fly business. Seems when you are in Premium Economy, you are still just another passenger. I am not a fussy flyer but to be told i could not use the business class washroom on a long haul flight albeit the closest to PE and the reason being it was for business class only. Other passengers were not stopped when they tried to use said toilets. I do not intend to fly with the airline anytime soon. Funnily enough all the other hostesses were really nice just the one hostess that screwed up the entire experience.
5/10

"was the worst inflight service"

✅ Trip Verified | Hong Kong to Cairns. Very poor premium economy service. This was the worst inflight service I've ever experienced. Took two hours for food to arrive on a relatively short 6.5 hour overnight flight. When it did arrive it was abysmal. Very small portion, bland, and overly salty tomato sauce on dried pasta. Not even three course meal. Crew very inefficient, passengers still had meal trays waiting collection three hours after take out. Then we were woken up again two hours later for "breakfast" which was a dry pastry in a box. This was my third trip on Cathay on this same route, and their inflight service has been very poor indeed each time. They are not cheap, and I would not want to fly again with them. Their seats are very comfortable but the rest falls far behind their competitors.
9/10

✅ Trip Verified | Hong Kong to London. Ground service was smooth and efficient. Though the gate was a bit far away from the immigration, the check in counter was very quick. The seat was modern and they provided a wide range of movies and TV shows in the IFE system. Two meals were served and snacks including cup noodles were served in between. Desserts were also served in the economy class. I could get my check in luggage swiftly and reached central London in an hour.
11 to 20 of 202 Reviews