"Brussels Airline does not seem to care about passenger safety"

✅ Trip Verified | During this Brussels Airlines flight, several passengers were not wearing their face mask. I looked at how a stewardess talked to a passenger who was not wearing his mouth mask for about 30 minutes. Not once did she tell him to put his mask back on. It was surreal. At the end of their discussion, I asked the stewardess if she could ask the passengers to wear their face mask. I complained to Brussels Airlines by email, got an impersonal copy/paste answer after 9 days, explaining how their filtering systems work, how flying is pretty safe, and I was also reminded with hygiene measures. Even during a pandemic, Brussels Airline does not seem to care about passenger safety. I strongly advise not to fly with Brussels Airlines.
1/10

"the staff impolite and the company a complete chaos"

✅ Trip Verified | I am not exaggerating if I say that is the worst user experience I have had in my entire life. They cancelled the flight due to corona, which is okay, but since then I am following up the refund of my ticket which still didn't happen. The service is awful, the staff impolite and the company a complete chaos which is obvious now under corona, the "corona" is a cheap excuse that airlines use to cover their disasters but now is the time when you see which are good airlines and which are horrible, in many ways.
1/10

"I do not recommend Brussels Airlines"

✅ Trip Verified | I booked a ticket for my son. Flight was cancelled due to Covid. Fair enough, I can perfectly understand. I waited until bailout came and that this airline could start reimbursing ticket. I filled up a form in June, we are in October, I still did not receive anything. Customer service never replies to calls, never replies to mails. They simply do not care at all. Living in Antwerp, I will now take all my flights out of Schiphol which offer excellent service by the way. I do not recommend Brussels Airlines at all.
1/10

"after 7 months waiting for refund"

✅ Trip Verified | Cancelled flight, ok fair enough, then refuse to answer emails, phone calls, or most social media chats. Then after 7 months waiting for refund, email to say it has been done, and will be with credit card company within a couple of days - still waiting. There is no intention of trying to rectify any problem.
1/10

"They did not even bother to reply"

✅ Trip Verified | My round trip flights on Brussels Airlines from New York to Rome (depart on May 5, return on May 18, 2020) were cancelled by Brussels Airlines due to COVID-19. I filed on their website to request a full refund for this involuntary cancellation ticket on April 22, 2020. Up till now on September 8, 2020, I have still not received the refund yet. They did not even bother to reply my last inquiry e-mail on July 24, 2020. Please avoid this company.
1/10

✅ Trip Verified | This used to be a very pleasant airline to fly with, but now we have had such dreadful experiences with them recently. Here are 3: 1. We plan to travel as a family of 4 to the United States in October 2020, flying Geneva-Munich-New York, and returning New York-Brussels-Geneva. The flight New York-Brussels is a Brussels Airlines/UA flight on October 24. We purchased the ticket online via a German travel agent. Recently, we received an email from Brussels Airlines indicating that the New York-Brussels leg of the trip had been cancelled. Despite extensive and repeated efforts on our part -- and despite very clear European Union rules in this area --, Brussels Airlines refuses to rebook us on another flight. They consistently argue that the travel agent should rebook us. However, the travel agent will charge us a rebooking fee of 49 EUR per person, a total of 196 EUR for a 4-person family. The European Union rules are unequivocal that the airline is responsible for rebooking. Brussels Airlines avoids all responsibility. A second matter concerns 7 travel legs cancelled by Brussels Airlines during the period of confinement March-June 2020, for which I am seeking reimbursement. Brussels Airlines has sent me on a repeated loop, in which the website tells me I need to contact them via Facebook or Twitter, and then Facebook tells me I need to make this request "via the website". Again the EU rules are clear: Brussels Airlines is obliged to reimburse. To date it appears that they are exclusively focused on avoiding their legal obligations. In July 2019, we flew to the US on a direct flight Brussels-New York on a saturday. Brussels Airlines did not manage to put our luggage on the plane. As our girls were starting camp on Monday, we were forced to buy replacement items on the Sunday. Our luggage arrived Monday. Brussels Airlines refused absolutely to reimburse the cost of the replacement items. Avoid this airline if at all possible.
1/10

"They did not refund them"

✅ Trip Verified | In March our tickets were cancelled. They did not refund them, although they promised to do so in writing. All further communications are simply ignored. Test aankoop (a belgian consumer protection organisation) started up a file but they also ignored that. Even when the Belgian government bailed them out due to covid-19, they keep the money and ignore us. If you book a ticket, know you enter a lottery and can only hope and pray you won't lose your money
1/10

"reluctant to give money back"

✅ Trip Verified | Gran Canaria to Catania via Brussels. They post on Internet flight that do not exist In fact After you Pay they send a mail, in my case to the agency, informing that the flight is canceled, but the flight stay on internet to make more victims when you ask a refund they are very reluctant to give money back. My flight should depart 6th of June, They say maybe give refund in November. 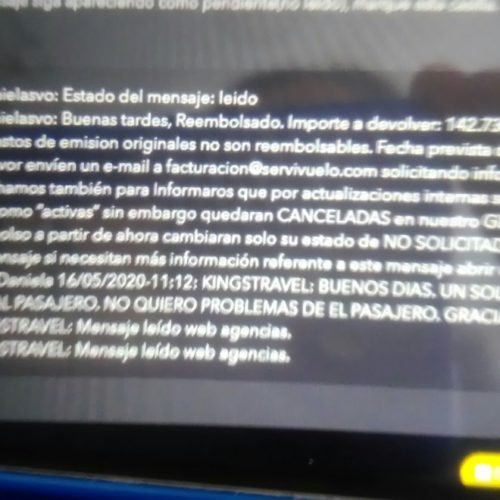 "distance between seats is small"

✅ Trip Verified | Moscow to Brussels, the plane is standard, not large and very old. The distance between the seats is small, suitable only for not tall person. Inflight they give a sandwich and drinks, although the choice is not large. The staff is good, positive.
6/10

"distance for the legs is not large"

✅ Trip Verified | Moscow to Brussels. Anold A320, in the cabin there are thin seats, it’s hard to sit on them, the distance for the legs is not large. Meals are average quality, no choice, drinks limited choice.
11 to 20 of 489 Reviews