✅ Verified Review | Booked economy class aisle seat. Aircraft quite old, seat pitch quite narrow. No inflight entertainment; no electrical outlet, however on the B737 there was wifi (return flight) which offered paid inflight entertainment. Seat is leather, on the way back I didn't understand why the B737 had an A320 safety sheet. There was a small pocket to store only thin books but not iPad and not for a bottle of water either.
1/10

✅ Verified Review | I flew from Düsseldorf to Copenhagen and back recently on an Air Berlin Dash8-Q400, which is a Turboprop. The duration of the flight was 1hr 15minutes. The flight to Copenhagen was delayed by at least 20 minutes, however having booked EconFlex, was able to retrieve my bags relatively quickly. The flight back to Düsseldorf was delayed by at least 30 minutes. The service on board was non existent, unless you paid for something. No pretzels, peanuts, water or anything. I get its a budget airline, but if your going to have 50 minutes of delays for a normally combined travel duration of 150 minutes, at least give the people a glass of water, but who am I to decide their polices. Being a larger person, its not uncommon for me to have some issues with leg room and so on, but never has it been as unacceptable as it was during this flight. I'm aware a small turbo prop isnt going to have the same room as a jet. My knees were a solid 2 inches (5.08cm for the rest of the world) in the seat back in front of mine. So all in all, sure I made it to Copenhagen with Air Berlin, would I choose them again, not really no. If I would be able to give 0 points I would have.
2/10

"worst of the industry"

✅ Verified Review | Air Berlin Economy has extra seats in Economy which you pay for, or it is offered to Elite members. This offer should be extended to One-World partners but it is not so: could not book it on web check in anyway. The ordinary seat is the worst of the industry, most squeezed, almost no recline. Will avoid this airline if flying Etihad Airways. 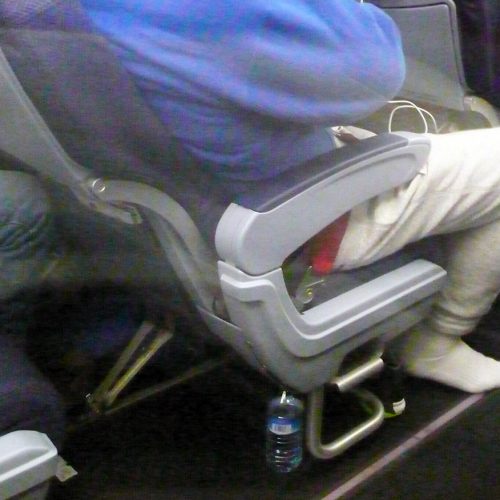 "was plenty of legroom"

I flew AirBerlin on an A319. The plane is all one class, economy. There is plenty of overhead storage. I felt for a discount airline there was plenty of legroom. Short flights so not much to write about. Seats were comfortable. For a short flight I would recommend Airberlin. As part of a codeshare though, they are difficult to work with. I could check in online on my outbound flight because it was the first leg, on my return flight though I couldn't do it because Etihad was the first segment.
1/10

"tripping over one another"

✅ Verified Review | Passengers are tripping over one another due to the tight quarters on this A330. I saw several people who had to put their feet and let's into the aisle as they simply do not fit where they are supposed to fit. Air Berlin offers terrible service at top prices.
1/10

"Seats the worst I have experienced"

Few from Los Angeles to Bologna via Düsseldorf with Air Berlin. Poor entertainment system. Seats were the worst I have experienced in many years of transatlantic flying. My hard shell Luggage was broken on the outgoing and I had to buy a new one on return flight and I am still sending emails back and forth to be compensated.
4/10

"will try and avoid this airline"

I have flown with AA miles in this airline 3 times in a year. Superb service, reasonably good food, but seats are terribly tight. I am 6.2", even so on a 9 hour flight, there is no possible position you can adopt and feel slightly comfortable for over an hour. Iberia definitely is a lot better, same planes I think. I will try and avoid this airline in the future. 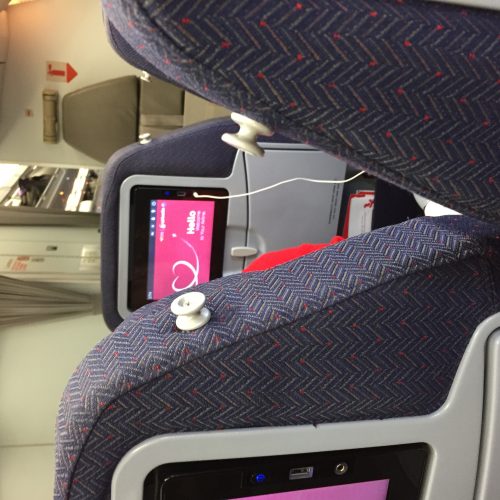 Legroom was non existent in economy - I wished I had spent the extra money on an XL seat. I'm 1.77cm and was pretty uncomfortable in my seat - the guy next to me would have been slightly taller maybe and had to spread his legs out wide to fit which made my flight even more uncomfortable. I saw a lot of people with the same problem - the width is also pretty tight. I'm tall but slim and found that I had to fold my arms to not actually touch my neighbour's shoulders for the entire flight. The young boy in front of me reclined his seat at the first opportunity for the entire flight and I had the screen literally in my face and had in turn to recline my seat to make do. I'd not fly Air Berlin again just based on the space issue - their tickets were not cheaper than the other airlines I usually fly so it's not like that would explain it.
2/10

Flew from Boston to Düsseldorf on an A330. Standard service, food not bad and a very good entertainment system. Unfortunately, the rows are so close together that the whole flight was very uncomfortable. After such a claustrophobic experience I would not fly Air Berlin again.
10/10

Good airline, on time and the cabin crew were very helpful. Leg space satisfying. Ground services excellent. Flew from Bucharest to Nuremberg with a layover in Berlin. Return from Berlin to Bucharest and a crew who made you feel at home, the captain described the cities we flew over as the clouds made it impossible to see anything. For those who are afraid of losing luggage especially on a trip with stopover in Berlin, by all means, arrive as early as possible at the departing airport and do not choose a very short layover. Tegel may be small but there are thousands of bags that need to be sorted out.
1 to 10 of 23 Reviews