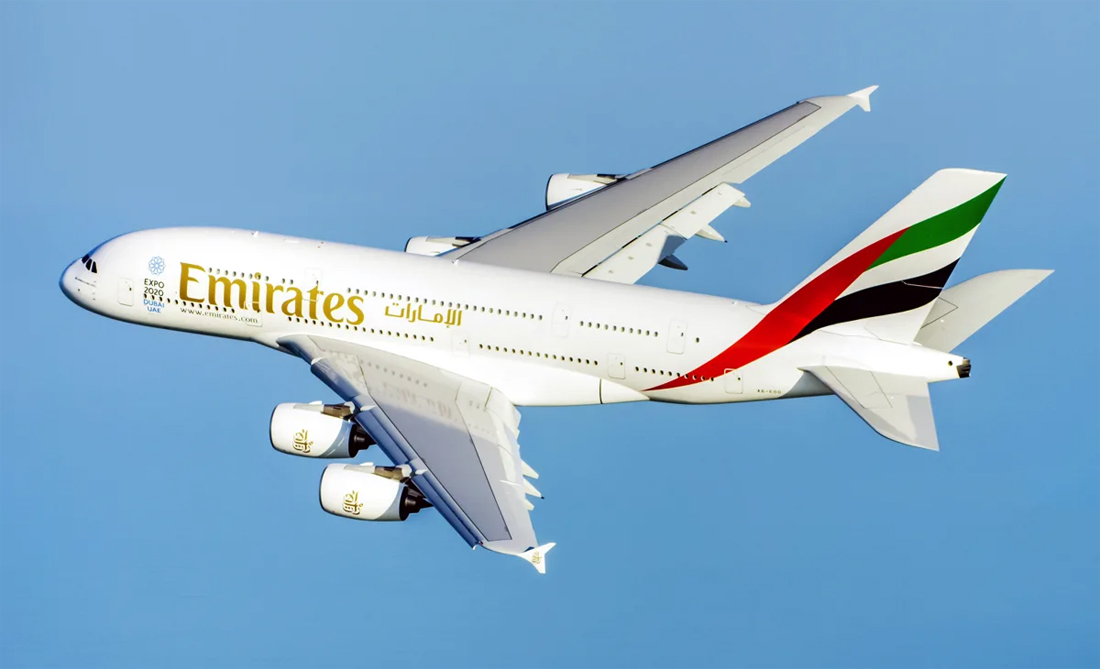 Kansai Airport is located on a man-made island and is the main international airport that serving the cities of Osaka, Kyoto and Kobe. As always in Japan, there are various efficient transportation links. A 50-min train journey from the airport serves Osaka City but there are plenty of buses that serve the vicinity and beyond. The main international terminal, where Emirates is within close walking distance of the train and bus stations. Emirates check-in is easily found with a clear layout and by virtue of the fact they occupy an entire row of counters. Check-in at 2.5-hours before take off has no passengers despite the flight being full. The queue signage was clear with well-arranged roped queue systems for online check-in, economy and at furthest end, but lacking any real premium touch is the combined First and Business Class area. I had already selected my seat and only needed to check my bag-in. Japan Airlines staff offer a pleasant welcome with service being straightforward and fast. There though was no directions as to which gate, which would have been helpful given Kansai airport has two different wings within the international departures area that requires different trains to transport you to them. Fortunately, signage is clear past immigration on where to go.

Check-in at 2.5-hours before take off is empty, despite the flight being full. The queue signage was clear with well-arranged roped queue systems for online check-in, economy and at furthest end, but lacking any real premium touch is the combined First and Business Class area. I had already selected my seat and only needed to check my bag-in. Japan Airlines staff offer a pleasant welcome with service being straightforward and fast. There though was no directions as to which gate, which would have been helpful given Kansai airport has two different wings within the international departures area that requires different trains to transport you to them. Fortunately, signage is clear past immigration on where to go.

One of the older A380s of the three versions that Emirates offers is used on this route. Flight time was 11 hours and 16 minutes. My seat is located in the front section of economy class in the second row, close to the staircase and cockpit.

Emirates offers a baggage allowance of up to 35kg in Economy Class, with only one bag, with a 7 kg limit of hand luggage. Some passengers at the boarding gate appeared to have two bags so this is not strictly applied.

The seat (44A) of the second row offers one of the more generous pitches at 34-inches. There is a good recline and for resting the comfort level is adequate offering a decent width of 18-inches. There is also an adjustable head rest with firm side wings. 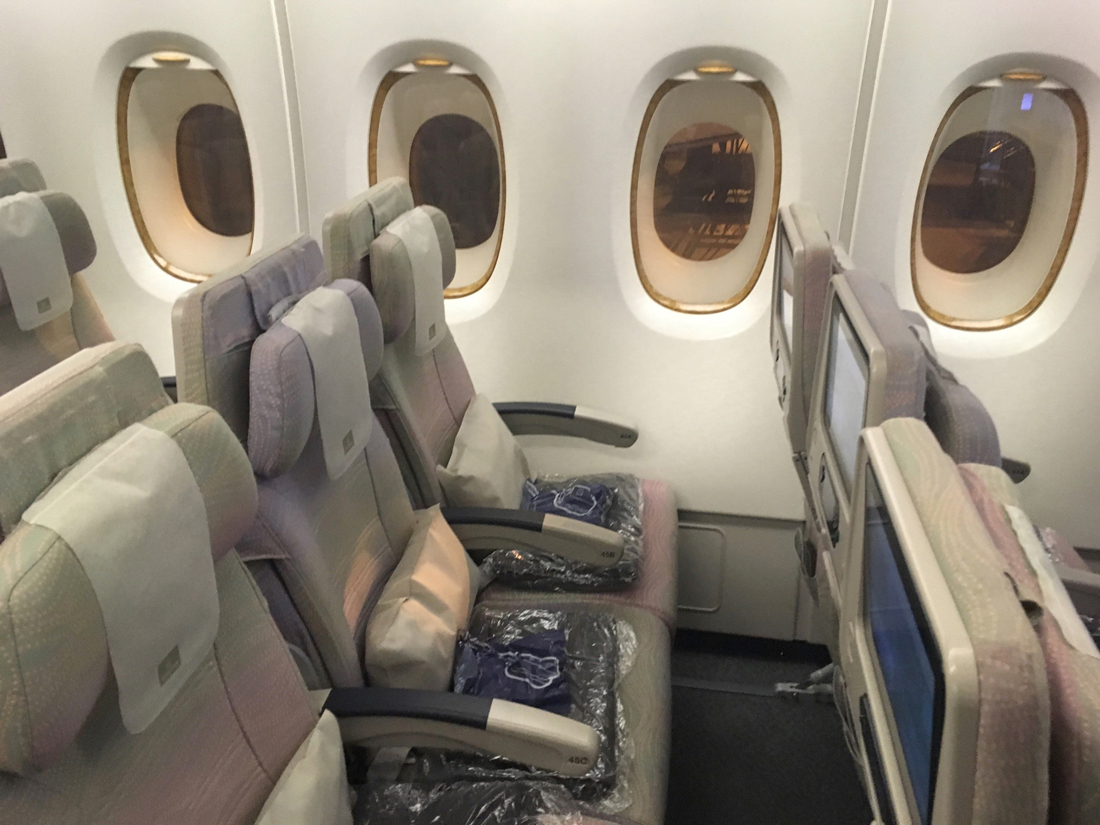 Each seat offers a 12-inch touch control PTV with a separate controller. Clarity is excellent with Emirates offering one of the largest screens for economy passengers. In addition, there is an international power socket and USB on the other. However, my seat power outlet did not work. Cabin crew advised to use the neighbouring empty middle seat. On this version of A380 all A and K seats have no power sockets, other than USB. The central aisle only has sockets every other seat. Worth considering if one needs mains power.

The seat offers a decent size pocket with storage size that could just about stow a 15-inch laptop. The upholstery has a slightly faded and dated look with very light blended colours and a colourful dotted pattern overlay. The table also folds out sliding back and forth with a drop-down cup holder offered when table is stowed.

The cabin walls match the seat colours with a pastel effect, creating a refreshing light image but the highlight of the décor is the wooden finish around every window rim, unique to Emirates. Emirates also use well utilised coloured mood lighting with each stage of flight adjusted gradually to the cabin conditions. Another unique feature to Emirates economy is the central aisle ceiling star light offered during the black-out phase. Impressive as this is normally seen in premium cabins on other carriers. This feature and the mood lighting creates a relaxing and exciting ambience during the varying stages of the flight.

The 10-abreast seat layout felt spacious on the A380 and given the position near the front staircase this allowed adequate room to walk around and stretch. Emirates also close each economy cabin with partition curtains, making this huge economy class feel well contained and smaller in each area. Each seat offers manual air vents, and these are fully opened during boarding which seems consistent on all Emirates flights. This is acceptable from hot destinations such as Dubai but from Japan during is not always comfortable. However, the aircraft does warm up inflight since most passengers appear to seal them off.

Within this front cabin, there are five washrooms offered on either side of the staircase, and three located on the offshoots to the cockpit. They never appear busy. A generous offering of White Company branded eau de toilette and hand lotion are available in addition to cups, tissues and paper towels.

Boarding is completed on time but there is a slight delay to pushback due to engineers trying to fix a mechanical issue. This resulted in only a minimal delay of less than 15 minutes. On the ground, staff distribute amenity kits, which are only offered on the overnight long haul flights.

The menu for this 23.30 departure offers two entrees, a Japanese meal or a western option for dinner and breakfast. The menu product is route specific and has translations in Japanese, English and Arabic. Each meal option is shown clearly but drinks are generalised to broad groups with exception of mini bottle of Moet and Chandon offered to buy at 20USD. 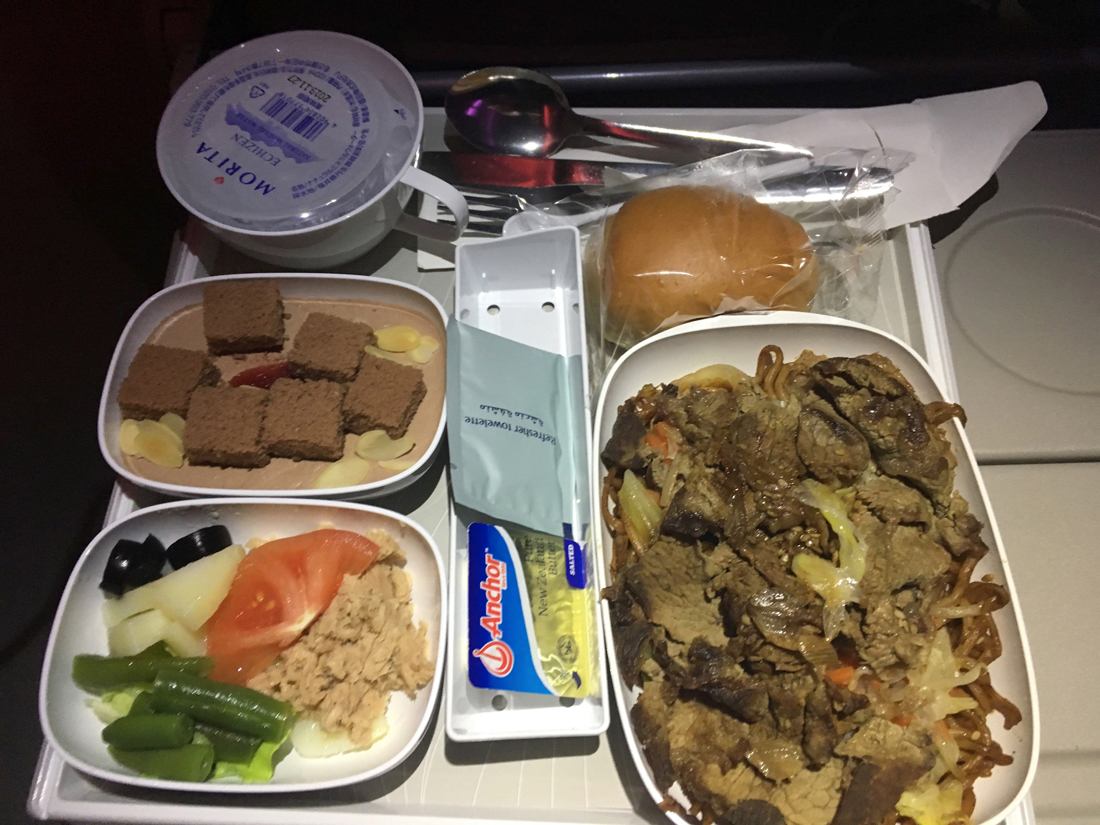 The catering out of Japan is of mixed quality which is generally not the case with other carriers.

The Niçoise salad is impressive but the Japanese entrée, Beef Yakisoba on the other hand is disappointing. Not so much the thinly sliced beef but the noodle base that is greasy and salty. However, the temperature is good and the flavour of beef is enjoyable but overcooked. It is of a lower standard than previous flights with Emirates. The chocolate mousse dessert has good presentation but is lacking in any flavour and has poor texture. The bread roll is fairly fresh but with a sweet flavour. The same roll seemed to be offered for breakfast.

For mid-flight, the menu states pot noodles are on request and there are a few drinks runs but these are sporadic and around every 2-hours. Around 2.5-hours prior to landing the breakfast service starts. There is an option of Chicken Congee or Japanese Tamagoyaki with chicken hambagu. The meat in this dish is again incredibly salty. The fruit product on the tray is also weak in quality. When compared to some other non-Asian airlines that depart from Japan the food is slightly disappointing, and the items lack much balance of flavour.

There is a large selection that includes Hollywood and various foreign content from multiple countries. Vast and extensive and across multiple genres that there is something for everyone. Emirates has won multiple awards and is recognised as the leading provider in this area. The system menu is easy to navigate and offered in 12 languages, one can read news from six outlets such as Reuters, BBC, view the full duty-free catalogue or play one of the 100+ games on offer. There is a function to send SMS and email directly from screen or use the hand controller as a satellite phone (at a charge). 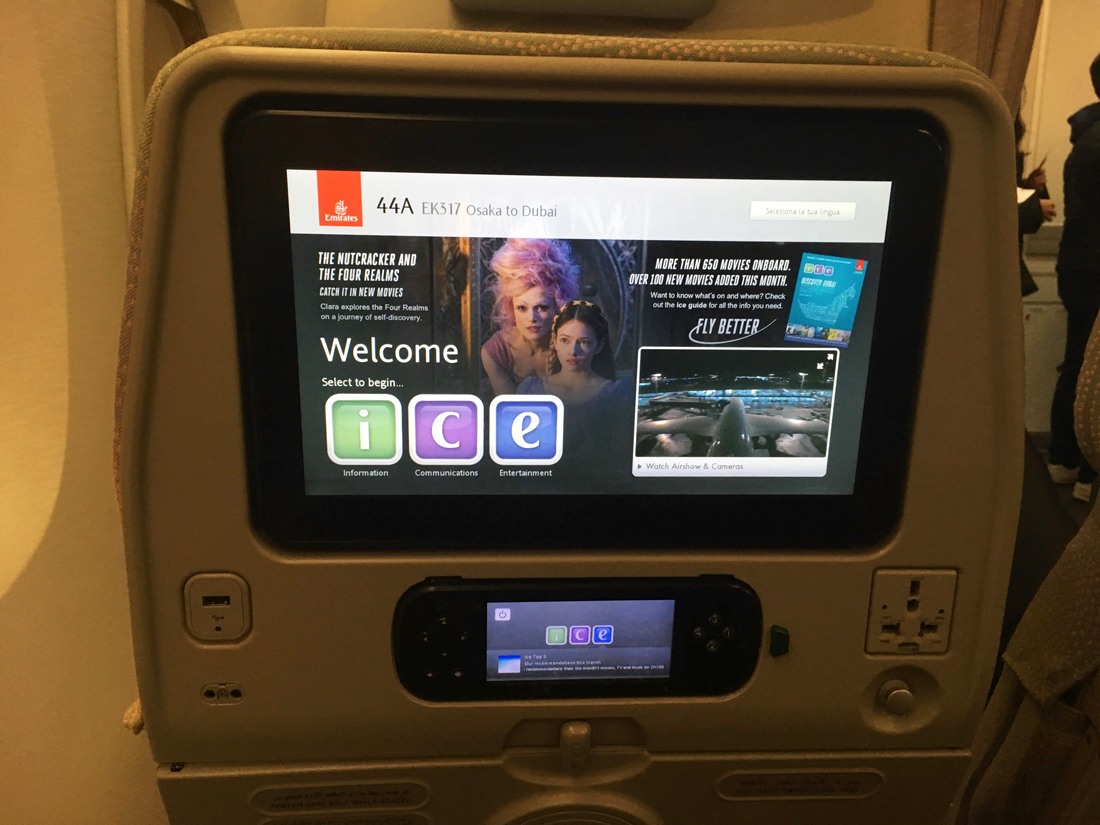 Free WIFI is also offered for economy passengers up to 20MB for a 2-hour time frame which enables a quick check of emails or use of messaging apps. Be wary though if you are flying over India where there is no coverage. The time frame starts from initial login, regardless if you pause or turn It off to use later.

The headset offered is unique, well branded but rather uncomfortable on the ears to use for long periods, due to the poor ergonomic design of rectangular ear pieces that after a few movies start to hurt the ears. Volume also needs to be adjusted high to hear the features clearly. It is disappointing these are collected 30-minutes prior to landing which removes the gate-to-gate experience that many major carriers allow, although if one has their headphones they can be continued to be used since the system is not shut down.

A generous amenity kit is given before take-off on this overnight flight. Contents include a matching eye mask, long socks, dental kit and ear plugs. In addition, there is a sticker system included for do not disturb, wake for meals. 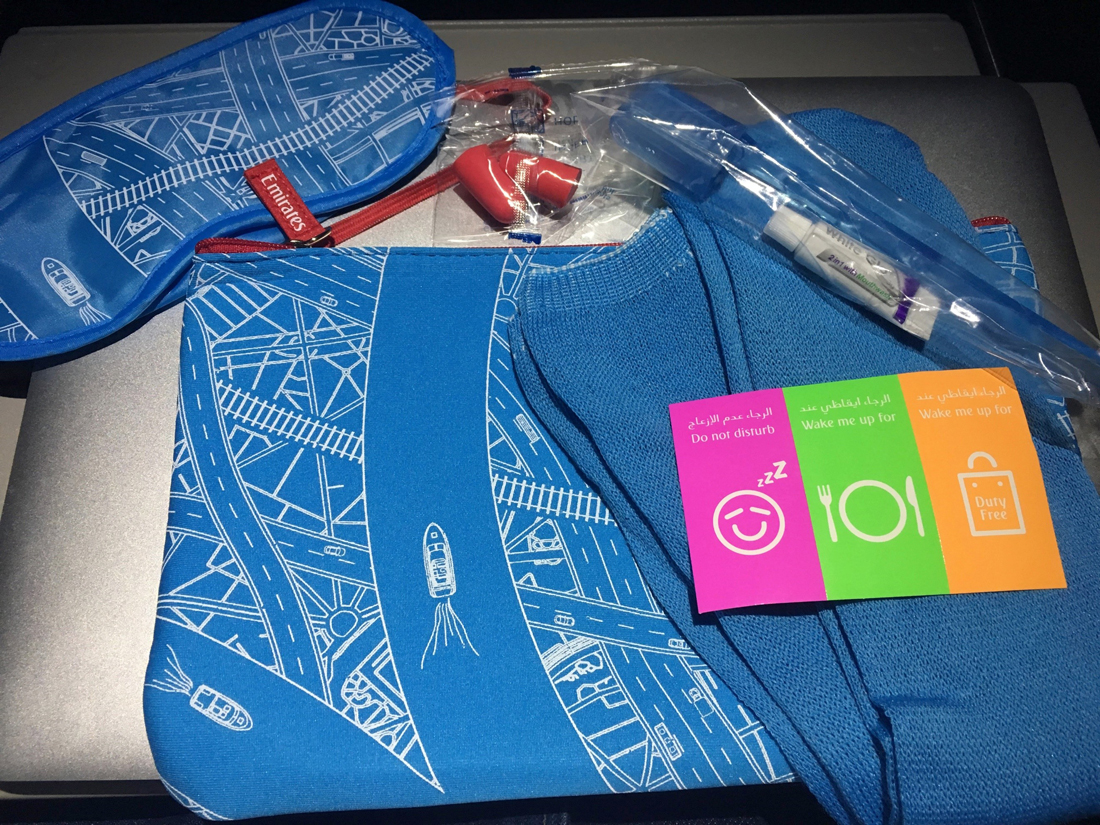 The pillow is rather old fashioned in design with scratchy hard pillow case covers, uncomfortable but adequate in support for the lower back. A blanket is offered in plastic, presented clean but rather plain and thin of fleece design.

In general staff on board this flight are lacking attentiveness and efficiency. The robotic approach for the most part is lacking warmth with interactions that come across as quite aloof.
Staff storm thru the cabin so fast that one can barely get their attention, especially when sat at the window. Staff are hard to get hold off with their avoidance of eye contact.

Drinks are also poorly filled to only half a cup during bar runs and the effort feels bare minimum. Call buttons took close to 30-minutes for a reaction and even then when they approach they assume you have accidently turned it on.

Cleanliness is a major issue, toilets are rarely checked. Empty cups are ignored, and they pile up. Even politely asking if they can clear, one is ignored despite saying they will return

Regardless of nationality, staff were consistent in their lack of effort to offer a good service. This is by far the most disappointing aspect of the Emirates experience of which is unfortunate as the hard product is at a reasonably high standard. It seems the main effort is pre-landing when collection of blanket and headsets is very important and is overly assertive. Staff demand unopened blankets and one feels they are concerned passengers will steal them.

Emirates have a good clear guide to transfer that is shown on the PTV’s during descent. This aircraft did not offer the connecting flight information for gates, which is experienced on the previous inbound flight. However, there some helpful guides to what is on offer at the airport as well connecting flight procedures.
Due to congestion, the plane lane 20-minutes from the schedule arrival time. However, the connections area and into security is quite empty and whilst there is a train connection, it still meant is in adequate time to be at the gate for my connecting flight within 25-minutes of deplaning.

The Emirates experience is mixed. Amenities, entertainment and ambience all contributed to a great offering by the airline for economy passengers. On this route the food product, whilst generous is lacking quality.

The main let down though is the staff service, disappointing in almost all areas. Lack of warmth, pro-activity and overall brought down the flight experience and worryingly noted on all recent Emirates flights. However. the ground service in Kansai as well as Dubai were meeting an efficient service and transfers worked well.