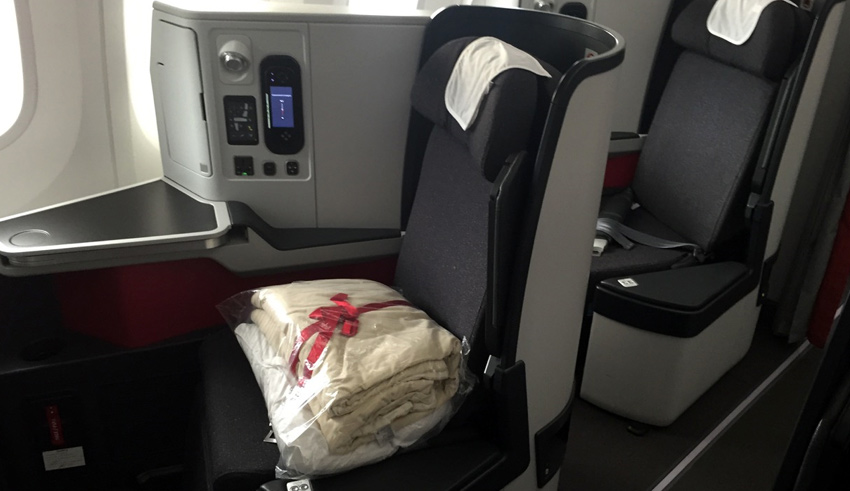 DEPARTURE AIRPORT
Arrived into Bogota from Quito and remained in transfer for this flight to London. On arrival ahead of schedule and having parked on the domestic apron, customers were bussed to the International arrivals area, which took about 10-minutes. Staying in transit for an onward flight to London, there was no need to pass through immigration and customers can proceed to the transfer security area. At this time (approx. 1930) the airport was at peak operations – the immigration and the transfer security area was very busy and from aircraft to departure hall took around 50 minutes.


AIRPLANE & CABIN FLOWN
This flight to London Heathrow was in Business Class on one Avianca’s newer Airbus A330-200 aircraft.

THE SEAT
Business Class on this Avianca A330-200 is split into 2 cabins with flatbed seats laid out in a spacious 1x2x1 configuration. This provides excellent privacy and personal space – there are various storage spaces including a small cupboard on the central console as well as a most useful armrest storage space that could easily accommodate a 13-inch laptop, tablet computer and various chargers. An ottoman / footrest area can be found under the television screen, and this provides a further large storage area. The IFE screen size is comparable to most other International airlines (approx. 15-inches) and functions with both touchscreen and hand held controls.

Avianca still have some older A330 aircraft with angled flat seats going into Europe, so it is something of a lottery as to what product you may experience. 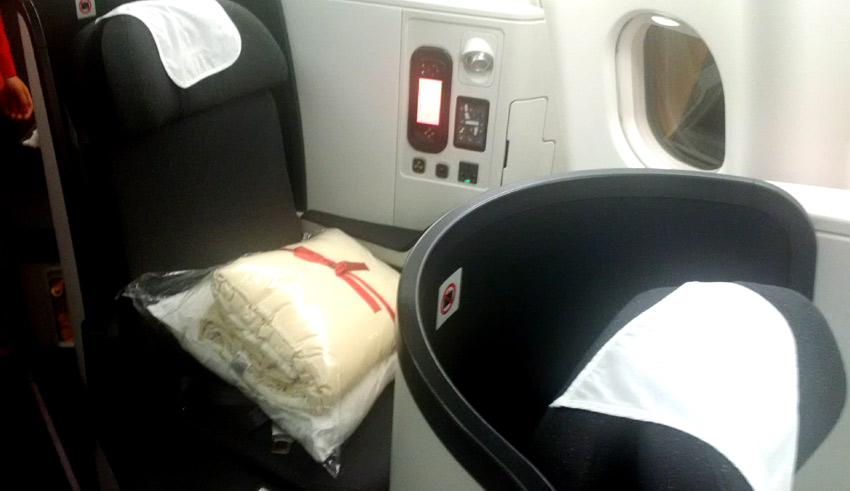 CABIN & TOILETS
The cleanliness and presentation of the A330-200 was generally good and this newer cabin layout gives the cabin a modern and fresh ambience. The Business Class cabin offered 3 toilets, 1 in the middle galley and 2 at the front. The toilet is standard size and offered L’Occitane moisturising cream. The washrooms remained clean during the flight but this seemed to be more to do with the customers rather than staff service as the paper towels ran out mid-flight and were never replenished.

SCHEDULE
After a late pushback, the flight departed Bogota about 20-minutes late – despite this, the 9h 25m flight arrived 40-minutes early.

FOOD AND DRINK
Boarding drinks were offered from a tray shortly after being seated. Champagne, coconut lemonade or water were available with a selection of mixed nuts. A food menu was distributed whilst the aircraft was still on the ground.

After take-off, a small canape is served – a chicken style soup in an espresso cup, which is tasty although only lukewarm. There is no pre-order service for the beverages or meals and these are served from a bar cart after take-off. The meal tray is delivered with everything other than dessert (which is served later). On the one hand, as this is a late night departure (2300), the speed and efficiency of this style of service might be appreciated by some customers, however, if you are expecting more of a course-by-course, leisurely dining service, you may be disappointed.

The meal tray is served with a blue cheese and pear salad, a plate with a selection of cheese, olives and prosciutto as well as the Moroccan chicken and couscous entrée. Following the meal, a nice dessert was served with a good selection of coffee or tea. The salad and appetiser were most flavoursome, as was the dessert, however, the main entrée was lacking in terms of flavour.

2 hours before arrival a similar service is conducted for the light breakfast. There was a cold choice of fruit, cereal and yoghurt (the muesli is not served with milk) or a hot omelette (which is all this dish is – no bacon etc). A basket of warmed breads or pastries is also offered. The same coffee and tea choices were available for this arrival service. Whilst the quantity of food may be a bit light for some customers, the actual quality of the omelette was good, but the fruit was slightly dry and disappointing, as was the strange package muffin. 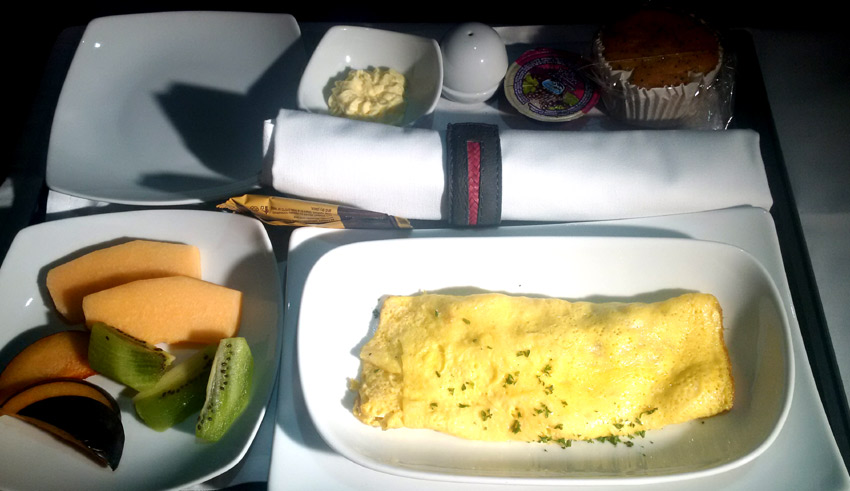 ENTERTAINMENT
Avianca offers a decent selection of Hollywood, European and other movies. There is also a good array of TV series from the US and Europe, with a wide range of music on offer too. The noise cancelling headsets were easily usable and worked well.

COMFORTS
On boarding, a blanket and pillow is available on the seat. The pillow was a large and soft, whilst the duvet was good in terms of the texture and comfort. Hot towels were served twice, once before the dinner service and again before the breakfast. The amenity kits are delivered before take-off, and contain the essentials, such as toothpaste and toothbrush – the TUMI branded case is easily the best part and offers good re-use potential.

STAFF SERVICE
The staff service is primarily based around efficiency and one cannot really complain about the speed of service for this late night departure. As mentioned, if you are expecting something more leisurely or restaurant-like you might be disappointed as this does not appear to be factored into the service design. English language skills are generally good, however, you will find that most conversation is initiated in Spanish and even after establishing you are an English speaker the staff will still address you in Spanish which can be frustrating. Overall, the staff are fairly attentive during the meals and the service is performed well to the current design format.

ARRIVAL SERVICE
Arrival into Terminal 2 at London Heathrow was ahead of time. The arrival gate in the satellite building was a 15-minute walk to immigration, which saw 3 passport checks. With hand luggage only it was approximately 25-minutes to landside after leaving the aircraft.

VERDICT
For long haul, the new flatbed seats are the highlight of the Business Class offering – this is a truly competitive product that stands well against other national carriers and the IFE content has enough to keep most customers happy. Whilst the catering product and service design might lack the complexity of other airlines, one cannot fault the efficiency of the service in terms of maximising customer rest time.