Not Verified | Due to low staff and poor management skills it took us almost 6 hours to complete our process of Check in, Immigration and Customs. They charged an exorbitant price of Rs 3500 for Rapid Covid test which can be done at Rs 100 anywhere in the country. The prices at Duty free are even more expensive than high street stores.
1/10

"took me 90 minutes to get through security and passport control"

✅ Trip Verified | Of all the 150+ airports in the world that I have used, Delhi airport is by far the worst in terms of handling passengers, let alone 'surge' periods. Despite traveling Business Class and using every privilege that I have, it took me 90 minutes to get through security and passport control. I pity others who don't have such privileges, they're bounced around in long-lines, and indefinite waiting times. Even showing up 4 hours before your flight isn't enough anymore. The first issue is with 'line-jumpers', those who brazenly disregard lines. They either are unaware, or just play dumb. There are also jumpers who jump in front of other line-jumpers, which requires you to have a sharp elbow, a cold stare, or a sharp rebuke ready and available. The second is lane discipline - there is none. Most of the people in the 'dedicated' business class lane didn't belong there, and there's no one checking if they belong there or even sending them to other lines. Essentially, everyone is everywhere, leading to total chaos. There's always the official guy (with a prominent badge, of course) who's escorting a couple of privileged people to the front of the line. Add to that airline crews, who don't bother with lines. All of the above could be handled if the airport authorities understood when surges happen; instead, there was only one passport reviewer for business class (while there could have been a max of 4). Security screening is another nightmare - those thin divider ropes are hardly respected and stops no one. In the end, we were just glad to get out of there, swearing 'never again'. On the way to the plane, a large banner reads "Delhi Airport - voted best airport in Asia" to rub it in. Even someone who's deaf and blind can see it's quite the opposite.
1/10

"Staff were not accommodating at all"

Not Verified | Very poor customer service. I came here via Dubai and as that flight was late, I had to race to catch my flight in Delhi. I went to the luggage drop off just to find out that the plane had already left! I stayed the night in a hotel and came back the next morning after booking a different flight. Again, I was told that the gates were closed. Staff were not accommodating at all. Would not recommend this place. Never coming back here again.
5/10

✅ Trip Verified | The airport receives many flights in the second half of the day. Our Air India flight from Malaysia touched down at 8.30 pm, and the conveyor belt number to collect the luggage was announced. The initial delivery was quick and most of the pax went away. Suddenly there was a break in the delivery of luggage. Pax patiently waited for well over 20-25 minutes but no action seemed to be happening. Efforts by many pax to alarm the setup through the Information Counter failed to result in any improvement. Finally some concerned executive arrived at the belt but showed a total lack of involvement and was very reluctant to call up the luggage delivery management setup. This was very unprofessional on his part, further delaying the delivery and aggravating the disgust for the pax. Other flights were landing at regular interval thus delaying the priority for our flight. It was at least one extra hour of wait before the luggage arrived. It highlighted a dismal management of the ground duties as well as total absence of accountability, since there was no public announcement about the reason of delay to deliver the luggage nor the concerned ground staff showing any concern about the system breakdown. Poor show - total unprofessional approach in spite of 4-5 staff observing the situation but making no effort to resolve. Would the out-sourced agency for ground duty management wake up and acknowledge this review.
2/10

""It is a pain to pick and drop passengers"

Not Verified | The main issues: 1) Airport private security and CISF lack basic courtesy. 2) Airport is overall cramped with no basic planning done for expansion so no connection with different terminal. 3) It is a pain to pick and drop passengers as airport parking lot is poorly designed and lack quick turn around. 4) Airport security is useless, almost lost my documents with no help in sight despite having so much armed security personnel.
3/10

✅ Trip Verified | Highly disappointed experience. GoAir had approx 15 counters for baggage drop but only 4 were working, though the staff at my counter were helpful other staff members I found were very lazy. Only one entry point for security check after baggage drop. Huge queues. Final call was made at 8:00 whereas on the boarding pass it was mentioned to be done at 8:15, due to this we had to leave our food. The final gate staff very casually said we can wait for 10 more mins if we want as fuelling was being done after we boarded the flight which was after the final call. Don't understand why cant it be done in advance and give more room to passengers.
5/10

"Terminal 2 was crowded even at 1am"

Not Verified | This was my first time into Delhi International airport. Flew in from SFO. Was told we would need to show negative covid test results upon arrival. No one asked for one on landing. Since United checked us I guess there was no point doing it again. The two employees supposed to check for temperature were checking their phones instead. On the way out I was able to walk to terminal 2 without too much hassle. The free wifi doesn't work and the OTP pin doesn't work unless you have a local number. Terminal 2 was crowded even at 1am. Didn't try the food as the eateries place was crowded. I was surprised to see that the airport had 'Best Airport' in South Asia displayed. On return to SFO I landed in Terminal 3. Indigo. Had a tough time figuring out directions to the International Departures. The seating area was crowded. Not enough seats. Hot and muggy too. There are very few food places in the departure area. Tried a couple of items. Terrible food. Not enough tables to stand and eat either. Once I got past the immigration and security the inside of Terminal 3 was decent. Not in any way award worthy. Can't wait for airports in South India to open up so I can avoid Delhi.
1/10

"some basic safety protocols should be implemented"

✅ Trip Verified | Worst experience of any airport in recent time. I know its pandemic time and we shouldn't expect things to be as smooth as earlier but at least some basic safety protocols should be implemented. It looks that no one was interested in the safety and comfort of passengers. The whole arrival process was completely messed, mismanaged and pathetic. Before immigration have some documents verification and different process for different passengers, those with personal test, without PCR test like that but no one was there to guide, everyone was going everywhere, no social distancing. Complete chaos. Then comes immigration, in normal days when there were more flights immigration was far smoother, now when there are very limited flights it took more. Reason for that was the immigration staff was updating each passengers address and mobile number which we had already updated on self declaration form before the journey, what a waste of time and man power. Then comes custom, earlier they randomly check baggage but after covid they scan all baggage and have only 2 scanners, another half hour. After that at arrival hall another document verification before exit, another mess I won't be using this so called World class airport in the near future for sure. 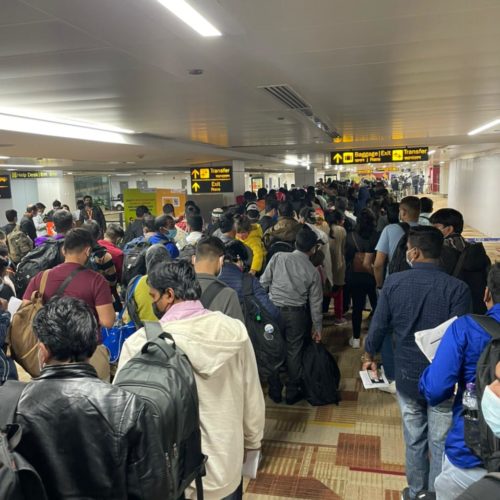 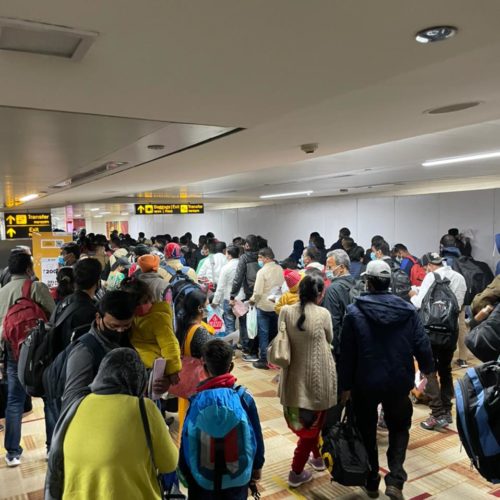 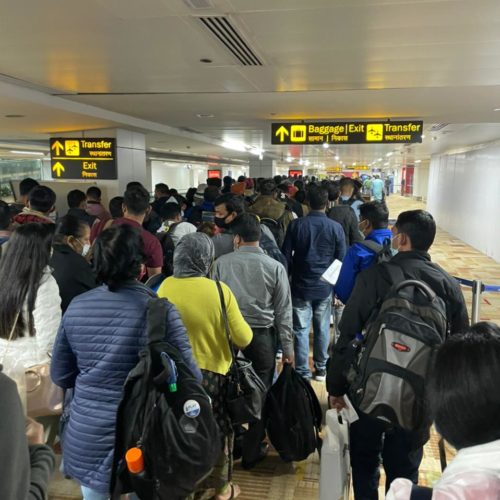 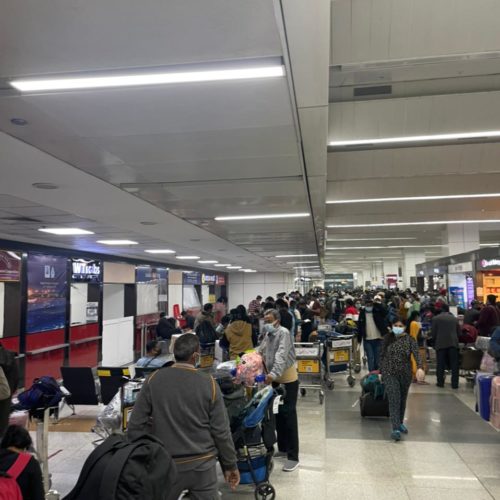 "the staff were very unhelpful"

✅ Trip Verified | The airport is well maintained but the staff were very unhelpful. This is my first time traveling to the airport and I had a connecting flight. I kept asking before and after customs if there was a drop off kiosk for my baggage. Nobody was even listening. I even asked in Hindi. They had no idea of what I was talking and told me to go out of customs and look into it. When I came out and asked, they told me I should have done before coming out. As such for other help too - very very poor customer service. No knowledge of things. Very bad experience. I generally don’t write any bad reviews but it has left me with a traumatic experience that I decided to write one. In future I will do my best to avoid connecting through this airport.
6/10

"Management of Airport is consistently shabby"

✅ Trip Verified | Management of Airport is consistently shabby in some areas. 1) Upon Arrivals, the luggage trolleys are usually stacked together at one end of the huge arrivals hall. 2) Upon exiting the airport, cars are parked for long periods of time in the passenger pick up area - the whole space is polluted by smoke of parked cars with their engines on, chaotic and intimidating to any visitor. Police deployed either don't care or ware happy to oblige for some incentives. 3) Security seems pretty good as is immigration and check in management. 4) Overall the airport can be very pleasant for departing, arriving is always a pain.
1 to 10 of 310 Reviews