"my issue is the dirt"

Not Verified | London Heathrow to Tunis Carthage. Plane was at least over 2 hrs late from departure but our return flight was on time. Service was ridiculously slow. Had 2 ask a few time the same staff member for some water. Food was not tasty, however my issue is the dirt and bacteria from a seating position is absolutely disgusting. Filth is not acceptable on that level, especially at the cost of their tickets. Tunisair you should be ashamed of yourself.
1/10

✅ Trip Verified | Over 4h delay on a 1h 45 min flight from Tunis to Barcelona. What’s more frustrating is the lack of information. No Tunisair representative knows what’s going on, what’s causing the delay, or when we will take over. Do not take this airline unless you want to be stranded.
9/10

✅ Trip Verified | Tunis to Lyon. Having read negative reviews, I was sceptical. However, I found the experience to be excellent. Although the plane was not new, it was clean and well presented. Boarding was organised and easy, cabin crew were very friendly and went out of their went out of their way to help. Meal was very tasty, for plane food and a gluten free option was available, even although I had not ordered one. The plane was busy, however, compared to many British short haul flights, pax were helpful, polite and quiet. I would not hesitate to fly them again.
1/10

✅ Trip Verified | Cairo to Frankfurt via Tunis. I booked flight via tripair with Tunisair to Frankfurt, the flight cancelled and gave me another flight in same day so I accepted, then it was cancelled again and gave me two days late flight. I refused this alternative, it was only 15 days before flight and prices got crazy and they refused to pay any compensation. In addition they sent on mail amount of refund which is less than what I payed( 233 Euro and I payed 344 euro) and I am keeping for 5 days and no clear answer how much will be the refund. Beside Tunisair is not replying at all.
1/10

"allow kids at take off in the cockpit"

✅ Trip Verified | Dakar to Tunis. We had low expectations when we booked Tunisair. They offer cheap fares and generous baggage allowance but you have to put up with delays - one hour and a bit in our case and a lot more - the captain allowed his children to sit in the cockpit during takeoff and landings, and the crew was only interested in catering to them and other crew's relatives, placed in three rows at the back. Allowing anyone into the cockpit is a serious security breach but unfortunately the norm at this state airline - you can imagine in case of an evacuation the crew would mainly care out their relatives. Also the AC didn't work, food was lousy and the crew generally crude but the main reason I won't be using them is the security breach. Tunisair is a loss-making state carrier controlled by labour unions which oppose reforms such as scrapping of free tickets for employees - other airlines offer similar benefits but I doubt they allow kids to take off in the cockpit. Also the captain upgraded passengers to business class after takeoff, probably his relatives or friends so why would anyone pay business class ?
1/10

✅ Trip Verified | Our first flight from CAI to TUN (# 814) on Aug 31, 2017 was delayed with initially no delay notification. We were delayed for this flight in the airport for over 4 hours with no food. Once on board the plane, we did not get the vegetarian meal that we requested when booking our tickets. Upon arrival in Tunis a representative told us that our meals, a hotel and transportation to and from the hotel would be provided to us free of charge. We were denied our request for a dinner voucher (after not having eaten all day), shops were closed so we didn't eat dinner. We talked with a representative who confirmed in the computer that we had selected the vegetarian meal option when we reserved our flight but somehow the request had not gotten through the system and he was unable to correct this for our next flight because of late notice to the caterers. So we went on another flight without food. Our flight from TUN to MAD on Sep 1 was again delayed and initially, we were not told how long we would have to wait. During our long wait in Tunis airport, we were given a single meal voucher. The meal that was provided didn't have anything we could eat and it took numerous difficult conversations, and over an hour, and requests from multiple people to get something that we could eat, and only then were we given a very small serving of vegetables, far less food than the equivalent standard meal. The flight 606 from TUN to MAD was delayed, again, past the rescheduled time. No new vouchers or meals were provided. Our flight didn't end up departing until at least 5 hours after the original departure time. We have a photo of the flight announcement board showing this. On the plane, again, the vegetarian meal we had ordered was not provided. Our plan was to be picked up by our friends who drove 3 hours from Portugal but since the flight was so delayed so long, and we were not given information about the delay, even though we asked, that we arrived Madrid past midnight, they had to pay for a hotel to sleep for the night. We were told to wait by the customer desk at Tunisair's counter in the airport, and we waited there for an hour and no one showed up. We had to pay for a taxi into the city, struggled to find something we could eat (having eaten so little in the past days) and pay for a hotel to stay that night. We told our experience to a Tunisair representative in Madrid who said that she would take care of it if we emailed her our experience. We did so, and she never responded. We also emailed several other places in the organization and no one ever responded. We filed a complaint report on one of our return flights, which no one ever responded to as well. In January, I continued to make calls to speak with a person on the phone. I spent hours on different lines, being referred from one place to another with every staffer I spoke to "not having the authority" to do anything about it, nor able to transfer me to someone in their department who could. On January 19th I finally found an agent in your office in Montreal who said that they would be able to resolve the situation, and would respond soon. No one got back to me until I had to reach out again on Feb 26th asking about the status of the claim, and only then did the agent ask me for my home address. After weeks of continued attempts, eventually a response from customer service, addressing none of my complaints was sent.
1/10

✅ Trip Verified | Tunis to London. On the plus side the flight was cheap and left broadly on time. In all other ways this was a truly dismal experience. Check-in was surly to say the least and, given how empty the plane was, very slow. Tunis airport is in serious need of some TLC. It feels cramped and hot and there are remarkably few areas to sit down airside. Onboard the seats were filthy, old and disgusting. Perhaps once the blue leather might have seemed like a good idea, but not any more. The seatback table was filthy. The food, when it came, was delivered with the same surly disinterest as the rest of the service. And it was disgusting. The aircraft was kept at an uncomfortably high temperature. But most shocking was the incapacity of the crew to contain the passengers. On departure there were children in the aisles, window shades down and seats reclined. the moment we landed people were pulling things out of the overhead bins without any intervention from the crew. Baggage took ages to arrive and Tunisair operates into T4 at LHR which meant a twenty minute wait to cross the runway on the way in and a long wait to get a train back to the central area. I've flown on many airlines and I love Tunisia, but this experience was not a fitting end to our holiday. 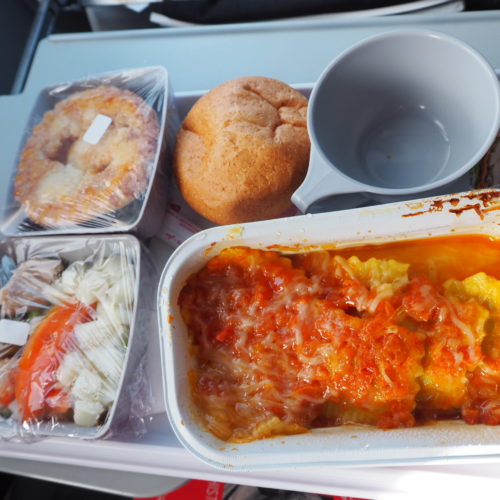 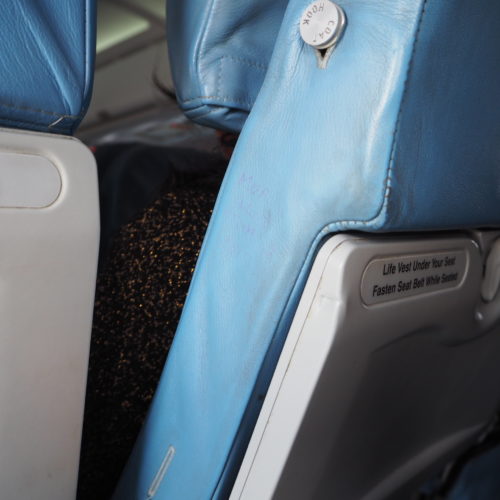 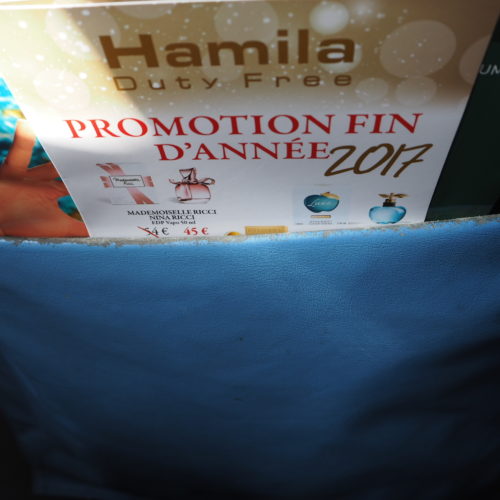 "offered no other options"

✅ Verified Review | I booked a Lyon to Tunis, Tunis to Madrid a week or so before travel and the trip was 5 days in length. About 5 day after booking, TU sent me an email about a 3 hour schedule change on the return. This was not acceptable to us and TU offered no other options. I tried cancelling the return but the LYS manager asked how could a 3 hr change effect it and that TU does not have to follow EU rules. Recommend you book on another airline.
7/10

✅ Verified Review | Tunis to Barcelona. Check in was long even with "dedicated" business desk. Despite online checkin you still have to get a boarding pass at the counter. No fast track possibilities for security checks / customs. Both flights were delayed (20mins and 90mins). Airplane was a bit oldish but legroom was above average. Staff is polite and available. Catering services are cheap. Overall average experience, being on time, catering and inflight entertainment could be improved.
6/10

"the flight was good"

Nice flight on Tunisair from Bologna to Tunis. Can't do online check-in so got to the airport early and got a window seat. Check-in lady was funny so that is always nice. Plane boarded on-time via bus and took off early. Flight attendants were friendly and served a nice lunch on the 1 hour 25 minute flight. Plane was Boeing 737-600 and it was old! Tray table was broken in 1/2 and the overhead lining was coming down the back of the plane. So I wasn't sure about Tunisair maintenance practices. But the flight was good and we landed on-time and bags were off quickly. 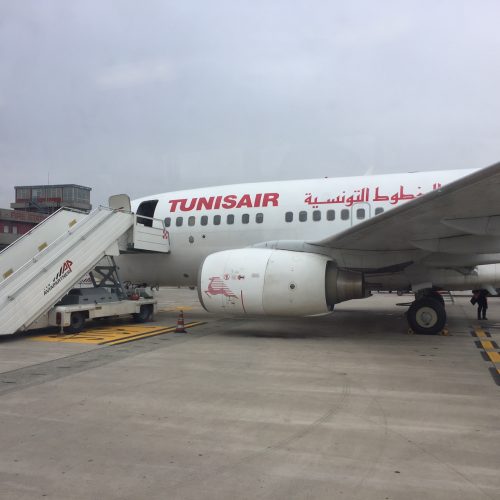 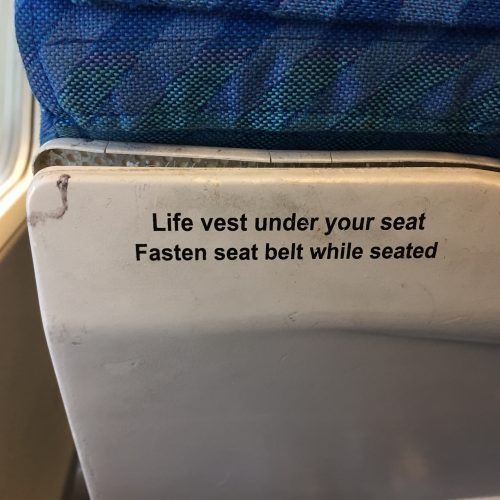 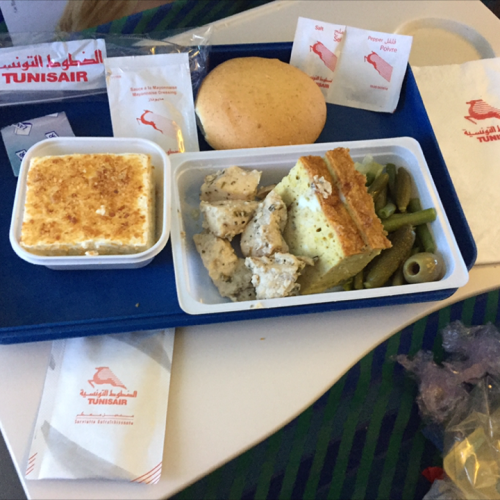 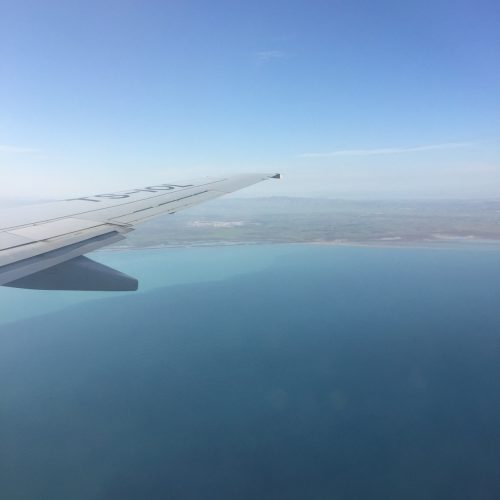 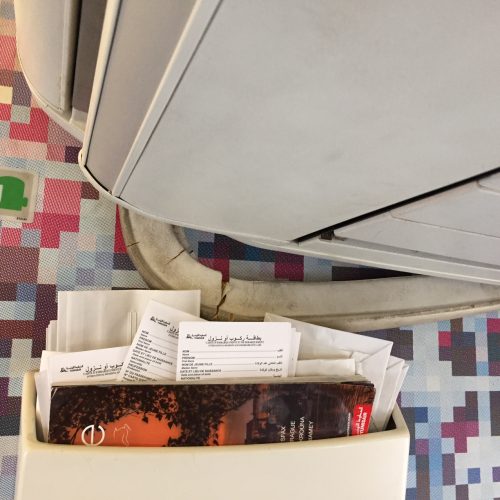