Flight from Manchester to Palma de Mallorca. Never heard of Small Planet Airlines before, but the flight went smoothly. No delay on my flight, crew was ready to help. Of course, will see about that when coming back from my holidays with the same airline.
10/10

Brilliant flight with Small Planet Airlines from Manchester to Faro on 18 August and return trip home on 25 August. The check in staff at the airport were great, the flights both left on time and we had a good flight. Cabin crew were friendly and helpful. Kids got a free inflatable airplane and they gave out sweets just before landing which were nice touches.
1/10

Manchester to Rhodes. Flight delayed by 14 hours due to 'operational reasons/technical issues'. Leg room poor on the aircraft. Staff tried hard to be pleasant but the effective loss of a days holiday (arrived in Rhodes at about 3 pm rather than 00.30 having had only about 3 hours sleep) out of a total of 6 days.
1/10

✅ Verified Review | I haven't even got words to describe Small Planet Airlines. 39.5 hour delay flying from Manchester to Corfu, no communication as to why, not the first time I have flown with this airline. Customer services is horrendous and now having trouble getting my compensation from them. 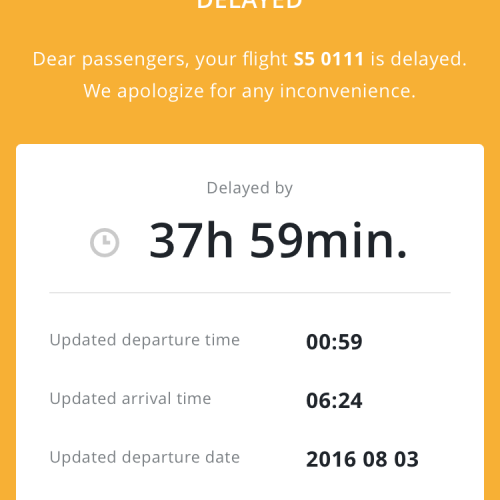 "not a great experience"

London Gatwick to Preveza . First time travelling with this airline and was looking forward to it after looking at the Small Planet Airlines website. What a disappointment, the aircraft used was Atlas Atlantique, an A320 that had seen better days. the interior was extremely shabby and the legroom was the worst I had ever experienced. Luckily there was a spare row of seats at the back of the plane which we moved to, which made it slightly more comfortable. The toilets had no water in them and were in a dreadful state. Small Planet - if you are going to lease in an Aircraft make sure its up to the standard of your own. The only good thing about both sectors was the on time performance. Not a great experience, will not use again.
4/10

"not impressed to say the least"

Due to fly at 14.20 on Sunday 7th August from Manchester to Zante eventually took off at 12.35am Monday 8th August a delay of 10.25 hours making a 7 night holiday only 6 nights. We were taken to a hotel and given rooms and food but by the time we had landed at 03.45 (5.45am Greek time) on the Monday we were all tired and it wiped Monday out. They don't seem to have enough planes. When asked what the delays were, being told "just be grateful you're not on the Kefalonia flight as there delay is 23 hours!". Not impressed to say the least. The captain was very pleasant and tried to make sense of it all. The flight back was delayed by 1.5 hours no notification by anyone. We figured out we were still waiting for the plane to land in Zante from Manchester before we could fly home.
1/10

"a 14hr delay with no information"

Flying from Rhodes to Manchester with Small Planet Airlines, flight S5224, departure 1.30 on the 18th. Flight finally took off at 15.30. A 3hr or 4hr tech problem (no one could decide) and then the crew went home to their nice comfy beds leaving us with a 14hr delay with no information. Well if thats customer care I would hate to see what happens when they don't care.
1/10

"a disgrace and should be replaced"

Kefalonia to Manchester. Do Small Planet Airlines only have one plane that flies from Manchester to the various Greek Islands? So if it is late on the Skiathos run on a Friday it will also be late on the Kefalonia run on a Saturday. Why dont GIC/Sunvil and Ionion and Aegean Islands Holidays do something about the problem which has been going on all summer? Olympic are not the only tour operator using Small Planet - they are using a common broker to source the flights. Not surprisingly they charge less for Manchester departures on their holidays than Birmingham or Gatwick. We were booked back from Kefalonia to Manchester on 7th August but as my son was 18 we were put on a Norwegian flight to Gatwick and then had a 6 hour taxi ride - finally getting home 12 hours late. If you had young children you got put on the Birmingham flight and therefore got back earlier. Small Planet Airlines are a disgrace and should be replaced. Shame the refunds claimed by the tour operators are not passed to customers who have to claim on insurance and pay excess.
1/10

Manchester to Rhodes return. We travelled with Small Planet Airlines through Olympic holidays the beginning of August 2016, we will never fly with them again. On our way home the flight was delayed for 8 hours with no explanation from either Olympic or Small Planet Airlines which was frustrating as we had our 8 year old daughter with us - we arrived into our home at 3am instead of late afternoon. On the way to Rhodes one member of staff looked like she was struggling and her cabin crew just kept shouting at her, doesn't look good to the travellers, I felt quite sorry for her. On the way home staff members were just rude, I appreciate that they were run off their feet with quick turn a round's but, they should have been more sympathetic the fact we were delayed for such a long time and we had to change more money to pay for extra drinks and food, we were offered nothing by Olympic or Small Planet Airlines.
8/10

"staff on the plane were lovely"

Manchester to Faro. I have to say I was worried after all the negative reviews before my holiday. We couldn't check in on line so had to queue at the airport and only allowed to take 5kg hand luggage. Well there was no queue, we all sat together and luggage was even under 5kg. We were not delayed going out but was 60 mins coming home. However the planes were clean and the ground staff and the staff on the plane were lovely. Thank you Small Planet Airlines.
31 to 40 of 85 Reviews