"Not a welcome experience at this airport"

Not Verified | Not a welcome experience at this airport. Queue for security over 2 hours. Only 2 checking lanes and huge queues. I think many people will have missed their flights. Also police definitely unfriendly, authoritarian attitude. 'you go there when I tell you to!'. Maybe they forget that passengers are the paying customers who give them a job. I know well that UK is not perfect but still much better than this. I would avoid this airport in future.
3/10

"I am very disappointed in the German organisation"

Not Verified | Long long queue, 1.5 hours waiting directly inside, for checking in. They put all the departing flights (Mallorca, Bastia, Canaria, Greece, another Mallorca) together at the same counters B3-B8! Chaotic! 500 people on each other. 1.5 meter distance? Not possible! No safety at all. Very stressed people. Not relaxed. I am very disappointed in the German organisation. My flight was EW652 to Thessaloniki. 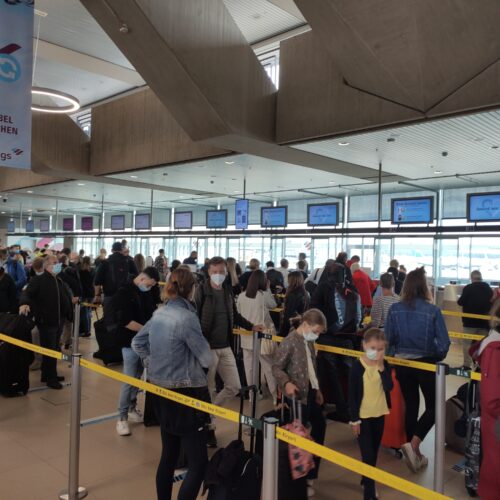 ❎ Not Verified | Most terrible customs clearing, 45 minutes in a line! Tip focus on domestic flights so you can handle it. For me this airport is the worst in Germany.
3/10

✅ Trip Verified | Firstly, my daughter and I (after arriving early, so we could eat!) encountered the stationary baggage queue (courtesty of BA) and despite joining the queue before it opening (2 hours before flight) we waited 45 mins to deposit cases. We complained and were told, there had been a problem. Secondly, immediately afterwards, we queued again for security, and I remembered a disposable bottle full of water (approx. 1 litre) in my bag. Already well into the queue, I assumed there would be somewhere to dump the liquid at some point (as is in UK and USA), I found a bin with plastic bottles in it and attempted to empty water into it. An extremely rude member of security (aisle 5) shouted at me for some minutes in German, much to my surprise and upon realising I didn't understand a word, told me to "do as I would at home"! I was doing exactly what I would have done in the UK and was then told either to exit the queue to dump the water in a toilet (which evidently would have resulted in my missing my flight) or that I had to drink the whole lot! I figure this was an exercise in humiliation, and one I had no choice in assuming I wanted to catch my flight. Immediately after this horrible episode I sought a place to complain and found a friendly guard who attempted to mediate to no avail and then suggested I formally complain. As I was speaking to him (10 mins) my daughter saw our flight was boarding and dragged me off to get in that queue. Passport control again and another 30 minute queue, which resulted in us running through the gate as they were closing it, 3 minutes before scheduled flight. I attempted to mention my concerns to the the same BA stewardess who had handled our baggage, only to be told that "it wasn't her fault"! I was in a complete state by the time I boareded and had been convinced (through no fault of our own) we were going to miss our flight. We had queued for the whole 2 hours - no duty free, no meal, no way I will ever visit Cologne again. A lovely BA stewardess explained that this is a new route (6 weeks), but there is no excuse for this kind of treatment, it leaves the bitterest taste from our 5 days away.
3/10

Not Verified | The security and immigration staff are appalling. When we were there they had two immigration booths. One was shut so everyone was queueing for the open one. They then opened both booths for approximately 3 minutes so people spread across the 4 queues and then shut the first queues they had open. Why? If they want to change staff over why not do it in the same booth! Once you go through security the amenities are very poor. There are no visible screens providing flight information, no charging points for phones and only one refreshment shop. Completely random there is a solitary table football table. So best reserve if you think there will be a queue.
5/10

✅ Trip Verified | This is quite a small airport, there is plenty of seating around the gates in Terminal 2. There is not a large selection of food and drinks, in the non-Schengen gates, there is only one store which is quite expensive. The terminals are linked landside only. The most annoying part of the airport is that gate calls are played across the entire departures area, so every minute there is a call for a flight, which can get frustrating. There are very few charging points, you will find some in the cafes, however they are under the tables usually. Strange for such a modern terminal to not include hardly any plug sockets. Good views of the runway from most of the airport. No queues at security or passport control. There are indoor smoking booths near the gates (airside).
4/10

Not Verified | There are many nice cafes and shops on the non airside, but the airside services are very inefficient. We waited over 30 minutes at B02 baggage carousel for our luggage from a Eurwings EW397 flight from Dublin in Friday July 27. The first group of bags appearerd after 25 minutes wait. There was then a gap of 6-7 minutes until they started to load the second (and final) group. Very slow and no staff or service desk available.
9/10

✅ Trip Verified | Arrival and departure from this airport . Inbound the queue for immigration was perhaps 10-15 minutes but at least it was a spacious area in T2 unlike Manchester T3. Airport clean and spacious. Inbound today at the same terminal security was a pleasure with perhaps a 3 minute wait max. Facilities airside are excellent as are the transport links landside. If only Manchester was up to a similar standard than flying would be a pleasure.
2/10

"rudest check in and security staff"

✅ Trip Verified | The rudest check in and security staff. You end up just wanting to leave as fast as possible. Impolite, tough, non English speaking in an international airport and not making any effort to facilitate the issues or help. They could try harder given the not small amounts of airport taxes!
3/10

❎ Not Verified | Next time I’ll visit Cologne, I’ll drive there by car or by train. I came there from Hamburg, this airport is a complete disappointment and the worst thing this great city has! To be fair, it’s well connected by train, suburban and regional trains in the direction of Cologne Central Station and Troisdorf/Siegen/Frankfurt arrive there, mostly on-time and it has a station for coaches. The queuing times are also good but inside the building there is a lack of shopping facilities, especially behind the security scanners. I couldn’t find a single restaurant in the terminal area and outside the gate area it is expensive. The terminals aren’t even clean, there is a lack of (uncomfortable) seats and the wifi is just very slow. At least the staff is good because they’re friendly (such as most of the Cologne-citizen), organized and they definitely know how they can help you.
1 to 10 of 48 Reviews