"a lack of shopping choices and amenities airside"

Not Verified | I was quite shocked by the lack of immigration checks and also the crowd at the airport. It was a hassle to retrieve our luggage as there was only one baggage track at arrival. There is also a lack of shopping choices and amenities airside but the items were so expensive, more than twice the price in Malaysia or other places even though the rupiah is cheaper than ringgit. But I'm pleased with the fast internet connection and the free computer services.
4/10

"have to give it a low rating"

✅ Trip Verified | Bandung Airport is a quaint airport in the middle of the city (used to be the HQ of. Indonesia’s domestic aircraft industry, meanwhile non-existing). It served a number of domestic and international destinations and was a real asset to the city. Then the government decided to build a grand new airport in Majalenka, about 60 or so kilometres north of Bandung, which had to cater for a growing population in the Bandung area and East Jakarta. It was opened pretty much on schedule, which is rare in Indonesia, but in the middle of nowhere; far away from current populations and with poor connections. Since no airlines wanted to move there, the government forced the move of 56 domestic flights from Bandung to the new Kertajati airport. This included the popular Bandung- Bali routes. The result is that it now takes longer to get to the new airport (about 3 hours), than it actually takes to fly to Bali. Some people now prefer to drive all the way to Jakarta, for more choice and cheaper flights. Efforts are made to reinstate some domestic flights in Bandung, but that does not include the Bali route for the time being. Overall, such a shortsighted decision to move all these flights from Bandung to Majalenka.:. So; for as long as Bandung Airport remains an ‘empty shell’ in terms of domestic flights, I will have to give it a low rating.
7/10

❌ Not Verified | The new airport is much better than the old but the issue with taxis remains. The military controls the airport and hence which taxis are used. No meters and extortionate fares. Better off walking 5 minutes south on road outside arrivals (right angle to airport terminal) and pickup a bluebird or AA cab from there. Clean and metered. Pity the Government does not stop in and do something about this as it is a horrible welcome to what is otherwise a friendly and interesting city and region.
8/10

The new Bandung airport terminal is very different to the old terminal. Cleaner, more space, more shops, and more toilets. Less delays, good lounges, some of the shops like Starbucks are incomplete. Good terminal cleanliness. Overall, good but could use more luggage belts in the arrival terminal and more parking spaces.
8/10

"doesn't look as bad as it used to be"

✅ Verified Review | I've come across old reviews of Bandung's Husein Sastranegara Airport and I have to say that the airport today doesn't look as bad as it used to be. The new terminal building is a welcome addition for an airport that handles nearly 90 flights a day. There is a security check for both international and domestic passengers before the check-in, and another one at the entrances to the international and domestic departure halls. Checks were quick and cleared the immigration checkpoint in less than a minute. Apparently most of the shops after the security area are in the domestic departure hall. The new international departure hall consists of only one gate (Gate 3i), a tiny magazine stand, a kids playground and a food kiosk that looks more like a mini warehouse. There is free wi-fi to keep people occupied, charging points for mobile phones, as well as plenty of seats. Since there are few international flights the international departure area doesn't feel crowded. As the airport is tiny there are no aerobridges, so you have to walk to the plane rain or shine. While this can be annoying for some, it is pretty great for aviation enthusiasts (you can get really close to planes that are taxiing to the runway). Would be happy to use Bandung Airport again. 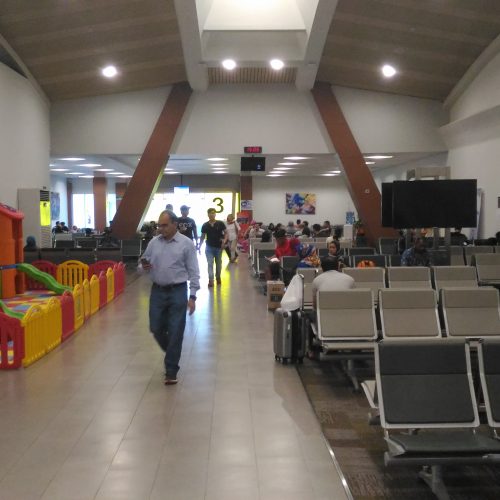