Not Verified | I wanted to fly by Air NZ. After finding out the Perth route was now going to be flying with WAMOS Air, I researched. I nearly canceled with all the negative 2-star reviews. Wamos Air is the best airline I have ever flown, service was fantastic, and the seats comfortable. Everyone was given a blanket and pillow, the food good for airline food. You could get extra drinks and food if wanted, and periodically, they would come around with water. On return to Perth, it was the same. The plane was not dated. The lady next to me, on returning, was quite ill, and the cabin crew couldn't do enough for her. They even reseated me so I wouldn't be concerned and they could access that traveller in case of added complications.
7/10

"I had a good flight"

✅ Trip Verified | Milan to New York. The airline I bought the ticket from went bankrupt and the first flights after bankruptcy, as mine, were operated by Wamos Air. Despite horrible reviews, the company is normal. Airplanes and services are just slightly inferior to those of other renowned companies such as Alitalia and American Airlines. I noticed that the blankets and perhaps also the meals had been provided by the other company, so I cannot really tell about the quality. However the crew was smiley and kind. Entertainment was sufficient, with about 30 movies to choose from. The toilets were as clean as those of major airlines. Nothing to complain about. I had a good flight.
3/10

"one has to buy the food/drinks"

✅ Trip Verified | Chicago to Gatwick flight with Norwegian was operated by Wamos Air and was absolutely horrible. At the check-in that we couldn't complete online we had to wait forty minutes. One of the employees wasn't very focused and got confused with our luggage as well as the boarding passes/passports. We did not know one has to buy the food/drinks. All staff spoke a lot of Spanish and avoided the contact with the passengers as much as possible. One stewardess was so rude that even passengers next to us complained. You can only pay with credit card - no other paying method is available. The staff didn't distribute water for several hours and said that we had to go back and ask them. Earpods weren't included and cost 3 Dollars a pack. The tv program didn't offer a wide range of programs and my touchscreen hardly reacted. I changed seat because the one I got first was even more uncomfortable.
1/10

"worst flights I have been on"

✅ Trip Verified | Gatwick to Chicago. I have flown this airline twice now and these were the worst flights I have been on. I booked through Norwegian and the flights were operated by Wamos. I'll never make the mistake of ignoring that again. To begin with, the seats are massively uncomfortable. I wasn't expecting luxury, but I could actually feel how the plastic fit together through the seat cover on this flight. Additionally, the cost of food was $45, so I chose not to order food, opting instead to bring snacks on the plane. Both flights I took were transatlantic, so around 8-9 hours. If you had not paid for food, they would not allow you to have even water. actually saw the flight attendants laugh in other passengers' faces when they asked for a cup of water on an 8+ hour flight! One of these flights didn't even allow passengers a chance to purchase snacks or drinks, either. The gate agents weighed passengers carry-on baggage when they felt like it (in other words, arbitrarily), so some people with overweight luggage were allowed on regardless of weight, while others had to pay £80 to check their luggage at the gate. My flight from London to Chicago took off over 2 and a half hours late and nearly caused me to miss my next flight. The crew were in no rush to help passengers move quickly off the plane, even knowing that there were people with layovers who would now need to make connecting flights with drastically less time (including going through customs, awaiting baggage, transferring to domestic terminals, and going through security again.) I would rather pay a massive last-minute ticket price than ever ride with this airline again and if I ever find myself in a position to fly with them again, I would either spend the money for a different airline, or just stay home.
1/10

"Would not recommend Wamos"

✅ Trip Verified | Denver to Gatwick. Wamos Air was used by Norwegian Air during my trip home to the UK in December. They contacted me by e mail informing me of this change. I was rather annoyed as I had flown Norwegian in the Summer as was very pleased with the service. I called Norwegian whose agent assured me it would be exactly the same service including my seat reservation and ordered vegetarian meal. The flight out from Denver was ok, despite my vegetarian meal being some inedible dried up pasta dish. Breakfast was a barely thawed hard bread mozzarella sandwich. There were no TV'S in the seats and one had to log on onto Wamos Air which I was not prepared to do as I only had Cellphone and did not want to use my batteries. In the return journey to Denver the flight was delayed by half an hour. In both directions I was placed in a middle seat not an aisle seat as booked. One lady was kind enough to swap with me. Fortunately on the way back the aisle seat next to me was vacant. By moving one seat over and informing the flight attendants I had done this, must have caused great confusion for them. I did not receive my vegetarian meal at all. I asked three times to various attendants which proved quite annoying to them regarding their passive aggressive facial expressions. Finally they told me they had run out of vegetarian hot lunches and brought me a cheese sandwich and a free beer, probably to appease me. I was not at all complaining at the time but their general attitude towards me was aloof and unfriendly. I went to the galley to ask for a cup of tea x interrupting three attendants happily chatting away in Spanish. I wondered why they could not have such cheery dispositions towards the passengers. One girl very much put out it appeared, gave me a cup of tea. The annoyance on her face was very apparent. I am shocked that a reputable good airline such as Norwegian would contract such a sub standard company to replace them. I paid my money and it was not that cheap for a service that made my journey uncomfortable and unfriendly. I have read other negative reviews of Wamos Air, so I am joining the throng of a large number number of very dissatisfied customers. Would not recommend Wamos to anyone. Grubby old plane hostile crew seemingly in a constant state of confusion.
7/10

"The staff were so great"

✅ Trip Verified | Gatwick to Denver. I was placed on a Wamos flight by Norwegian, and almost cancelled due to all the terrible reviews, but I didn't find it that bad at all. We brought our own movies to watch, and our own food (which I normally do on a flight anyway as I like healthy stuff). I've had worse legroom on other flights, and the staff were more friendly and helpful than many others I've known (and I fly a lot). The plane was pretty old, but perfectly functional. The staff were so great that I told them I'd write a review because I felt that the pasting they're getting online is unfair, and makes us travellers look rather spoilt to be honest.
1/10

✅ Trip Verified | Paris to Los Angeles. My flight was originally supposed to be operated by Norwegian. They replaced their plane with one from Wamos at the last minuter. Everything you read on Wamos is true: probably the worst airline I have flown with. The only good thing I could say about them is that the plane was clean, and the staff was courteous (most of them). Everything else needs a red flag. No electric or USB plugs for your devices, no entertainment monitors: you have to use your own tablet or device by downloading their app before taking off and connecting to their network, which means if you don't have any of these devices or if you are an older person who has a hard time with the new tech, you're sidelined and have no movie for the whole flight (12 hours sitting in a tight seat doing nothing is a long time). Not even mentioning if your computer is not compatible with their app (that was my case). I had to watch their programs on my small iPhone. And the connectivity/functionality of their app is appalling: if you have to rewind even once, good luck! Now, regarding their entertainment program: 10 old movies, nothing else. I had seen most of them, and the ones I had not seen sucked. Finally, about a major matter on a plane: the food. Norwegian is a low-cost airline that makes it confusing by having to pre-order your meals when you book your ticket. But the thing is, it's kind of really not clear, and when you book your ticket, you tend to automatically assume that meals are included. I pre-ordered mine without knowing . But many people don't. The next available option is to purchase on the plane, but they only sell food to the other passengers way after they serve the pre-ordered meals, and it takes for ever, because of how many passengers are in that situation. I will never use your services again, unless I have no other choice!
1/10

✅ Trip Verified | JFK- London (Wamos Air, operated for Norwegian). This was easily the worst experience I've ever had on an airplane, and I've been around the block for a while. Whilst the two hour delay can be excused, there was little understanding for the lack of any form of customer services. There were no screens/entertainment devices (which for an 8h flight is understandably frustrating) and no service whatsoever (as in, no food or drinks). When I asked for water for the 3rd time, I was supplied with a 1/4 cup of brown-ish water, that certainly did not taste right. The stewardesses did not provide any helpful services and spent most of the flight talking to each other. Most members of staff were rude and did not accommodate any of the request of my fellow travelers. Do not get me started on the airplane itself - the seats were as uncomfortable as they get, and small. The air conditioning did not work and it was stuffy and hot throughout the entire flight. Again, for an 8 hour flight that is just not bearable. I advise to not ever fly with Wamos Air .
1/10

✅ Trip Verified | Gatwick to New York on Wamos Air operated flight. Ancient airplane. Seats so crowded a fight literally broke out when a woman near me tried to recline her seat. Food was average. Staff was extremely young, badly trained. Older staff did better but were clearly stressed by passengers who were appalled at the lack of space. Video screens were also very old; many did not work and the ones that did showed only one old movie. No programming.
1/10

"was the worst plane"

Not Verified | This was the worst plane we ever flew on. Very little leg room with a fold up footrest that presents an injury hazard in up or down position even at low impact. Inflight entertainment non functional. Some toilets out of order, one with the toilet seat on the floor. We flew out 1 hour 45 minutes late with no explanation. We were put on this plane by Norwegian Air and we will not use Wamos or Norwegian again. 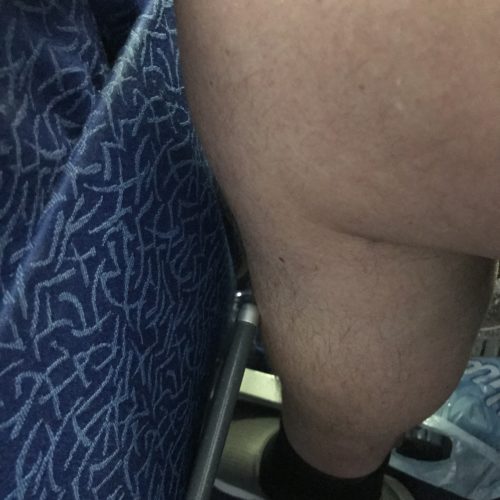