✅ Trip Verified | Bangkok to Yangon with Myanmar Airways. The ticket was quite expensive compared to other airlines on this leg, but paid the amount as I wanted to try them out. Arrived at the airport with literally no line with ground staff asking for details regarding my visa and return flight as I would leave the country via another airline. Flight was delayed by about 40 minutes upon departure. The cabin crew were very friendly and the cabin itself was nicely decorated with some xmas decorations. The legroom however was very very poor and definitely less than most LCC carriers. On board wifi available to use their app and some content on their app, but very limited. Complimentary drink and snack which was passable for a short flight. Luggage took a while to be on belt.
10/10

✅ Trip Verified | Bangkok to Yangon. What a pleasant surprise. Clean aircraft. Pleasant, professional and efficient crew. On-time performance. Tasty snack for the short flight. Even the pre-flight service was great - email requests for special requests were answered within an hour. True 5-star service.
6/10

"it did not disappoint"

✅ Trip Verified | Bangkok to Yangon retjurn in mid-May. This is my first experience with this airline and it did not disappoint. The check-in at the airport for both flights were uneventful, efficiently handled and most notably, having little or no queues, which is always a welcomed sight when there are snaking queues at neighbouring counters for other airlines. The boarding for the outgoing flight started a little after the scheduled time. The planes do not have any seat-back entertainment units but for the outgoing flight, there was onboard wifi which allow you free access to a selection of movies and TV shows on the MAI app which can be pre-loaded onto phones, Ipads, etc. The selection was limited. For a 65-70 min flight, it is impressive that the cabin crew is able to come round with wet tissues followed by a meal and drinks service. The cabin crew were polite and cheerful. The captain made announcements regularly which were spoken in clear English. 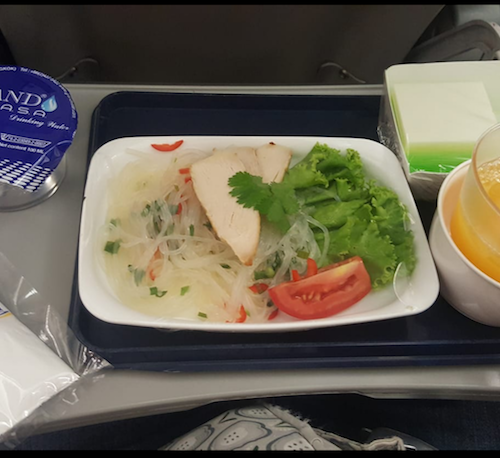 ✅ Verified Review | Flew Myanmar Airways from Mandalay to Yangoon on an A319 on 8 March 2017. Initial flight, which was on an older ATR72, was delayed 1 hours and 20 minutes. I was informed about this instantly when arriving at check-in in MDL. Upon request, I managed to board an earlier flight (a more modern and quicker aircraft) after a bit waiting at check-in. Service impeccable. Less than 20 passengers. Full catering service including food, beer, softdrinks and hot-drinks. Clean aircraft, observant and fast working staff. Arrived 40 minutes prior to schedule with the original flight which was said to be “likely further delayed”. They accept special meals and my seafood meal. The meal was confirmed but I had, upon consent, to forsake it as I took an earlier flight. Very nice airline and quick operations.
9/10

✅ Verified Review | Flew Bangkok to Mandalay return in November 2016. Faultless, punctual travel on a A319. Huge business class seat extremely wide and well upholstered. We were 5 passengers in business class which had 2x2 seats in two rows. Pre-departure Moet champagne, thereafter frequent drink rounds. Exotic, cultural, intense, truly kind, and focused service. Good food and snacks. FA apologised (!) for the food being loaded in Bangkok and this could not keep fully up to their expectations. Special meal accommodated and reconfirmed by check-in staff. Food good. No IFE. Pleasant trip. Rebooked free of charge on a discounted business class ticket. Misleading info on homepage on Visa on Arrival in Myanmar cost me time and money. Lack of ability to accomplish purchases of business class tickets directly online is a big fault letting me into the arms of OTA’s. This pulls 1 point back. Otherwise 10/10.
9/10

Very clean aircraft. The cabin crew were very attentive and nice. Seat pitch was good, aircraft cleanliness was OK, but could use improvement. The inflight meals were sufficient for a one hour flight, I was served a chicken sandwich. The presentation of the food was good, and it also tasted nice as well. Overall, I would recommend this airline to anyone who is trying to visit Myanmar for a cheap price.
na

NYU to RGN. First told flight would not be direct then 1 hour delay then flight cancelled. They book us on the evening flight with another airline. Story of operational issues with plane seemed less than truthful. Airline needs to improve reliability if they wish to serve and attract international passengers. Airline website lacks any real time flight status. At checking everything done with paper and pen. I noticed a number of passengers whose reservations they could not find. Good idea to print out receipt when you book and have it with you. Staff were helpful as they could be under the circumstances.
8/10

RGN to Mandalay. Airfare considerably less than other airline. Flight was on a new airbus. Check-in while chaotic went well. Lots of airport staff. Everything was done manually with paper and counters. Cabin crew well dressed and pleasant. Flight was comfortable and on time.
5/10

Flight RGN-TVY-MGZ on an old ATR. Plane very worn from the inside and outside. Cabin crew very friendly and efficient. Small snacks and drinks offered on each sector. Recommended.
7/10

BKK-RGN all economy flight. Short connection from our late arriving EK flight from DXB was made easier by a meet and greet at the arrival gate to the transit MAI check in. Easy boarding for a 60% full flight changed seat row after takeoff fairly elderly A 319 showing its age light snack and drink on the short 1 hour flight. To our surprise all our luggage made the short transfer and arrived after BHX/DXB/BKK/RGN first on the carousel.
1 to 10 of 27 Reviews