"they changed the airline to Egyptair"

✅ Trip Verified | Flight from Cairo to Hurghada was cancelled and they sent me an email at 10:00 pm, 8 hours before the flight time and what I didn’t realize that they also changed the airline to Egyptair. So it’s not the same terminal in Cairo, Terminal 3 instead of terminal which is 18 minutes by car. So I didn’t catch the flight and had to buy a new one way ticket for a flight after 3.5 hour! So after checking in to Hurghada airport for the return flight & everything was fine until the flight is delayed for 19:00 instead of 17:30 and my original booking was for 14:00 but they sent me an email 4 days ago that this flight is cancelled &amp. They chose to give me the sm 63 flight at 17:30. Conclusion: If you have any work on the day of the flight with this airline company be sure that you will not reach on time. Or maybe you will not reach the same day.
1/10

"deception, lies and lack of communication"

✅ Trip Verified | I will forever regret not treating the bad reviews seriously before traveling with Air Cairo. Their flight from Hurghada to Prague turned out to be by far the worst traveling experience of my life. First problems arose when we were notified in Hurghada that our flight was delayed by five hours. I discovered on flightradar24.com that the reason for the delay was the plane having been diverted to Skopje on a flight from Hurghada to Belgrade earlier that day. This was our first warning sign, foreshadowing what was to come next. When we finally took off and headed to Prague, the captain announced that our flight was diverted to Leipzig, Germany due to "bad weather" in Prague. The crew also told us that no planes were allowed to land in Prague for this reason whatsoever. When we confronted them with the fact that we were the only plane being diverted, they suddenly changed their story and claimed that our aircraft was not suitable for landing in low visibility. When we proved this to be a lie as well, they changed their story once more and told us that the pilots were inexperienced and therefore not trained for landing in foggy weather. What the real reason for the diversion was and how their side of the story would have developed had we pushed on them further, I have no idea. When we were finally allowed to leave the aircraft in Leipzig, we received no information about future plans whatsoever and the crew simply went to bed. The staff at Leipzig Airport were unable to help us either since the only people who knew at least something about our situation were asleep. At least that is what they said. Furthermore, they denied us access to our check-in luggage in spite of some passengers being in urgent need of their medication. On the plus side, Leipzig Airport provided us with beds and blankets to survive the night, for which we were thankful. Air Cairo, on the other hand, did nothing. The following morning was a disaster as well. A substitute flight from Leipzig to Prague was scheduled first for 5:30am, then for 11:00am. However, we still had no specific information as the airport staff was unable to reach the crew and the management of Air Cairo refused to communicate with us. The airport staff claimed that the only thing for which we were waiting was the crew, who were asleep at the hotel. Yet when the management of Air Cairo finally started answering our questions, they told us that the crew were already waiting at the hotel in their uniforms, not knowing themselves why they were not able to fly. What was the reason for the waiting, then? Were we waiting for the fog in Prague to disappear? We had no idea because no one bothered to tell us. After many hours of stressful waiting, during which we were again given misinformation multiple times and several passengers burst into tears, the crew finally arrived with no further explanation at 12:45pm and we took off at 1:30pm. To sum up, our landing in Prague was delayed by 20 hours. There are, however, two aspects of our situation that are most annoying. Firstly, it was argued that our issues were caused by fog. Yet we were the only plane on that day which had this problem and dozens of other aircraft were perfectly capable of taking off and landing in Prague. The problem was therefore clearly on the side of the airline and their pilots. And secondly, what I consider even more disgraceful was the arrogance with which the airline treated us and all their deception, lies and lack of communication.
1/10

"The worst service ever"

✅ Trip Verified | The worst service ever. After I paid for my tickets on their official website I got shocked in the airport that they didn't list my name in the list of passengers nor 10 other passengers. While the economy seats were all booked by other passengers already. Moreover they refused to upgrade our seats to business class although it was available and we didn't catch the flight. After many calls the company finally told me to go to another terminal to catch another flight after 4 hours of my original booking. Very unprofessional.
4/10

"Delay of more than 4 hours"

✅ Trip Verified | Aswan to Cairo. Delay of more than 4 hours without any representative available to apologise or communicate any details. When buses were taking passengers to the flight they started asking if anyone like to have a snack in order to reduce cost clients around losing sightseeing tours and connections without anyone to care even apologize through airport public announcement. 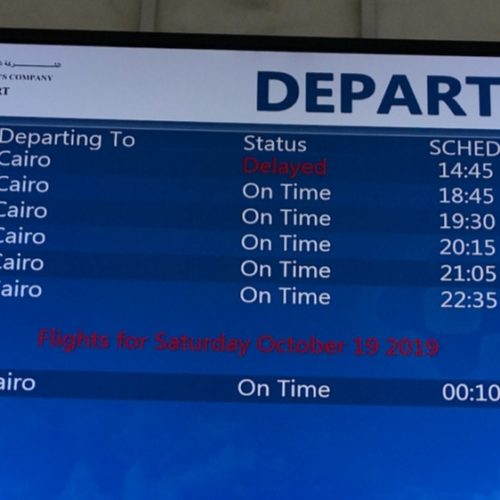 Not Verified | Warsaw to Marsa Alam. Although the flights weren’t delayed, I had a bad experience. The staff wasn’t friendly. The planes are old and worn, which makes the seats extremely uncomfortable. Legroom doesn’t exist. Food was terrible. It’s not a good airline
1/10

✅ Trip Verified | The flights of Air Cairo starting from Hurghada were all delayed apart from one national flight. Our flight was marked "delayed" without any further information. Boarding started 5 min before the estimated departure. Passengers were driven to the Aircraft by bus and had to wait in the bus for 15 min. Then the bus drove back to the gate without any information and there was no staff at the gate. Passengers had to wait for almost 4 hours until boarding started again. Again no official information. The flight was redirected to Cologne instead of Dusseldorf. Therefore there a bus transfer to Dusseldorf was offered, which took a lot of time again. In total the arrival in Dusseldorf was delayed 5.5 hours and the only information we got was unofficial: A passenger said the pilot told him, the airline has failed to get a landing permission for the aircraft in Dusseldorf.
10/10

"both flights were comfortable"

✅ Verified Review | I had a fantastic week of holidays in Hurghada and to review a hotel is a must but I also think it is very important to acknowledge the airline which makes it all happen by bringing you over and back in safety. I flew with Air Cairo for the first time there and back after a week and both flights were comfortable and I felt very welcomed. The staff both on the flight on 24 June (Prague to Hurghada) as well as on 1 July (Hurghada to Prague) were friendly, smiley and professional. At one point there was strong turbulence and the staff were supportive. Next time I fly to Egypt I will go for Air Cairo.
1/10

✅ Verified Review | Doha to Alexandria. Flight cancellation without notification and a very rude attitude On the 13th May I had a flight from Doha to Alexandria Borg El Arab airport at 11:30 pm (Doha time). I was travelling with my 1 year old baby. I was in the airport at 9 pm and check for our counter station but couldn’t find the flight and it was scheduled. I started visiting travel and info offices at the airport to check the flight but they told me it is not registered on the airport screens as it is not scheduled in the first place and they guided me to visit the airlines offices next day at Ras Abou Abboud Street at 8am. I was shocked as I had to return back to my office next day. I spent the night in Doha and next morning and they refused to book me daytime and insisted to travel on the same time 11:30 pm on another airline after a two hours debate The country manager of the airline was very rude and had a terrible attitude and didn’t even bother to be a good marketer for his company and was upset to book another flight. This is a cheap low profile airline.
10/10

✅ Verified Review | Dusseldorf to Hurghada with Air Cairo. The crew were friendly and professional, they even offered me 2 meals as I was so hungry. The flight had no turbulence and we reached Hurghada safely and on time. Great experience. Compared to the german company I flew back with the staff with Air Cairo was way more friendly and offered more food and drinks free of charge.
7/10

Istanbul to Sharm El Sheikh and Cairo to Istanbul: The planes were new clean Airbus 320. They didn't serve us a hot meal only refreshments (butter cookies and a drink). Even the flights have been delayed for 2 hours on both ways I recommend Air Cairo.
1 to 10 of 12 Reviews