"The seat was wonderful"

✅ Trip Verified | During this pandemic - I actually travelled Virgin Atlantic on the first trip after lockdown here in the UK that they had with passengers. Hiccups on the way were expected. The seat was wonderful, the leather is really soft and the crew are just brilliant. I had a bulkhead seat on 21A and there was plenty of legroom. Cabin Crew bring through these items that you can put your foot on, like a leg rest but it is moveable due to the bulkhead. My only downside would be that the screen is on the side of you and can get stuck when you try to stow it back to its original position.
1/10

Not Verified | Dreadful, nasty old 747. Cramped, old fashioned, outdated IFE, very narrow seat pitch, dreadful livery. Truly an awful experience, never again. In fact, the whole aircraft was crammed to the rafters. Felt like cattle by the end of the Manchester to Orlando flight. The word ‘Premium’ should be removed under the Trade Descriptions Act.
5/10

"seats are so small and tight"

Not Verified | I just boarded my long flight (in Atlanta) for London and am unhappy already! We paid for more legroom (I believe it’s called comfort/premium) and can’t believe that the seats are so small and tight. We flew from Florida to Atlanta in Delta comfort, and the seats and they were very nice. This was a waste of money! 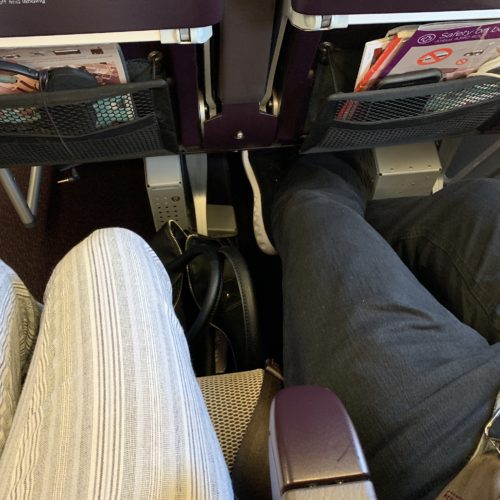 ✅ Trip Verified | The movable head rests are awful, they are intended for comfort but I just found myself sitting with my back to the chair and my head uncomfortably forward, this leaves no room for me to use my neck pillow and get a decent night sleep. The recline on the seat isn't great either.I am of average height 5'10 I can only imagine how uncomfortable these seats are for the taller person.
8/10

"not looking forward to flight home"

Not Verified | Staff excellent. Meals much improved. Overall very pleased, but the reclining seat in front nearly broke my kneecaps! I’m just over six feet tall, which is not exceptional, and travelling Premium Economy in hope of extra room. More space please, it spoilt an otherwise enjoyable flight - not looking forward to flight home now.
4/10

"Was too narrow for my taste"

✅ Trip Verified | Extra legroom seat which is a plus however the Boeing 747-400 seat itself is very narrow. Virgin Atlantic have shrunk the size of the economy seats to 17.3 inches which is the narrowest seat of any full service British carrier out there. Was too narrow for my taste.
4/10

Not Verified | Out bound journey to Cancun was perfect 4 seats together as a family should travel. The flight home on the other hand was upsetting to say the least. Checked in on line as soon as check in opened to discover we were given seats scattered all over the plane. Thought we would be able to change our seats as we were checking in as soon as it opened but not so. Apparently after a web chat with the customer advisor was told the seating plan was locked and we would have to speak to the Virgin check in desk. Did manage to get 3 & 1 seats but very poor inconsiderate and upsetting seating arrangement by Virgin Atlantic. Sad end to our holiday and would think twice about booking with Virgin Atlantic again as just felt like we were fodder.
2/10

✅ Verified Review | Only issue with the Virgin flights on this and previous occasions is seating (e.g legroom and headrests) I'm 6'7' (2m) and I could only just squeeze my legs in behind the seat in front and my head and shoulders stuck up above the top of the seat back. I spent most of my time with my knees in the aisle where the stewardesses rammed them with trollies and they were a trip hazard to other passengers. The head rest at its highest was between my shoulder blades so left me with no option but to lean my head forwards to sleep. Chap in front slammed his seat back and thumped my head. Managed to force my knees down to get my feet under the seat in front but finished up playing footsie with the chap in front. Also, TV screen on flight out to US was fixed (couldn't pull base outwards) so when chap in front reclined his seat all I could see was a 1 inch high screen. In my view, Virgin want to make tall people so uncomfortable they'll pay for extra leg room. Why are they allowed to get away with it?
3/10

"could not recommend flying with Virgin"

✅ Verified Review | We were looking forward to our trip to India and our first time flying with Virgin Atlantic. Sorry to say we were very disappointed. The staff were mainly helpful and pleasant and the meals adequate but our complaint was with the comfort (or lack of) regarding the Boeing 787 aircraft. Everything seemed very cramped; seating, legroom, aisles etc. And I am probably a small average. The lady in front of me had difficulty reclining her seat but after being helped to do this by the hostess, I felt that the seat was about six inches from my nose! But I think the most dangerous thing was the food tray which kept slipping and sliding over the small table. I had to keep one hand on the tray while trying to do everything else with the other. We didn't take hot drinks with our meals in case of an accident and perhaps injuring our neighbouring passenger. During our stay in India we took an internal flight from Delhi to Jodhpur with Air India. A much shorter flight of course but the A320 aircraft was far superior in comfort,space and a great deal quieter. I could not recommend flying with Virgin.
6/10

❎ Unverified | I flew New York to London return in premium economy. The seats are essentially like US domestic first class seats, a bit more comfortable and roomy than coach, leg room is better than coach but not amazing or anything like business class. The service was pretty good, pre flight drink, amenity kit on the overnight flight but not the day time flight. Food was a little better than coach I hear but cant tell because I didnt try a coach meal. Served on glassware and a menu was provided in advance. It wasnt a huge amount of food as I expected so I had a few nibbles I had brought on board to supplement. The wines were the same as coach, little bottles of plastic provided. After dinner there was an offering of two liquors if you were in the mood. I was somewhat annoyed that the plane on either trip lacked a plug or usb for in seat power. When I asked the crew brought some sort of adapter which I suppose you could get if not too many asked. The in seat tv quality was poor on both flights, the display was low quality and frankly hard for me to see or hear via the headphones. The entertainment options were broad but the quality of the display and audio not so good. I did appreciate the over head individually controlled vents which seem rare on Airbus wide body jets. This ticket cost about 500 more dollars than an economy ticket since it was pretty close to booking and travelling. Maybe not worth much more than that given coach seemed quite empty and you could spread out. People were in middle seats in premium economy but not in coach. I downgraded to a full row towards the middle of the plane and slept much better than I could in the prem economy chair. I enjoyed the food and movie in the front, slept in the back.
1 to 10 of 121 Reviews