✅ Trip Verified | My wife and I recently flew from Manchester to Banjul and return with Thomas Cook (Condor) airlines, a 6.5 hr flight each way. I am 6ft 3 ins and both of these flights were absolute torture - I could not sit with my legs straight and actually got my knee wedged between the seats when the passengers in front reclined their seats. I tried to book extra leg room seats but was told there were none available. However on the return journey some passengers sat in allocated seats for take off then later were moved to economy plus seats at the front. I asked the cabin staff why they had moved, I was told they had pre-booked the seats. Why were they not sitting in these seats at take off, no explanation was given. I will never fly with Thomas Cook again and advise any one over 5ft 6ins to think a lot more than twice. They just want your money and disregard your comfort.
2/10

"the seating is just the worst"

✅ Trip Verified | Just flown back from Lanzarote today. Flight attendants were very good but the seating is just the worst I have ever encountered. I am not exactly tall at 6ft but I have never suffered a 3 hour plus flight in such an uncomfortable position. The seats are wafer thin and I spent the whole flight with my knees against the seat in front. When the passenger reclined that seat the pain became even worse! Bring on Easy Jet who have this type of travel off to a tee! Take my advice and avoid this airline at all cost if you want to arrive at your destination able to walk.
3/10

"the seats are so close together"

✅ Trip Verified | Avoid this airline like the plague if you want a comfortable flight. 4.45 hrs from Paphos to London of sheer hell, I am only 5’10 and slim so by no means a large traveller. The person sat next to me was also slim, we were continually banging elbows as the seats are so close together. No legroom, my knees were touching the seat back in front, no storage big enough to keep anything but a slim wallet, table too small to fit meal and drink on and be able to eat. Best of all the seat in front reclines to give you even less room, let alone be able to get up to go to the loo. Fantastic clean new planes and excellent staff but this cannot make up for the sheer lack of room, it’s a joke. First and last time with Thomas cook, makes other budget carriers feel like business class 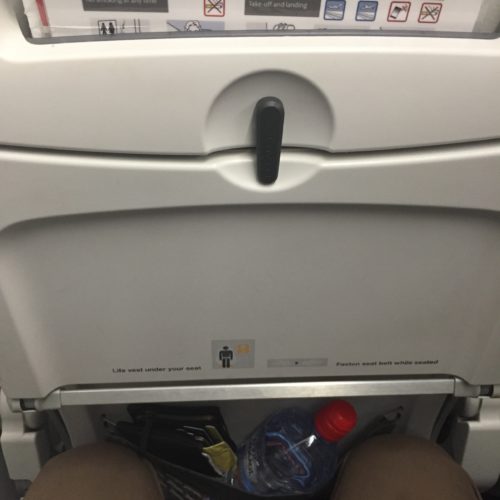 ❎ Unverified | This is the most uncomfortable airline I've ever flown. 5 hrs with my legs rammed up against the sea in front. Very unpleasant. This airline charges more per seat than the low cost airlines and enjoys a higher occupancy. Great for profits, not so good for passengers. Avoid if at all possible.
1/10

"changed our seats without notification"

✅ Verified Review | Four times this year over different flights Thomas Cook Airlines have changed our seats without notification moving us from paid extra leg room seats to normal, with a simple "you will have to claim your money back". Will not be flying with them again, customer service extremely poor.
1/10

✅ Verified Review | Watch out for flights between New York and Manchester! If you have a ticket operated by Condor, I would recommend avoiding like the plague. I was stunned at just how awful this airline is. There are no screens on the backs of seats so forget about any in flight entertainment. As for the in flight service, this was pretty much non existent. I was promised a meal in advance by Thomas Cook, however as its operated by Condor, no luck. Drinks cost money which, again, shocked as its a long haul flight and these are advertised as included on the Thomas Cook website. To top it off the seat was tight and uncomfortable, avoid like the plague.
6/10

✅ Verified Review | Seat padding was good and I liked the fact the seat backs are rigid plastic so you don't feel when someone goes into the seat pocket. Leg room very tight, no good if you were tall. Also I'm very small and with the tray table down I had no room to move whatsoever.
10/10

❎ Unverified | We flew long haul to Cuba seats 2H/K. Plenty of leg room and didnt feel blocked in. Service was very good and staff were friendly. Staff always offering drinks nothing was to much bother. Booking again next year and definitely book premium class again. Would recommend all of row one as you have a lot of extra room there. Well worth prebooking your seats so you get what you want
5/10

✅ Verified Review | Economy was the only choice on our recent trip from Lanzarote. We reserved seats 1B and 1C. The bulk head was in front of us. Especially in seat 1B it was impossible to stretch legs. You could put your legs under the curtain in the aisle seat, but run the risk of tripping someone up. The flight was around 4 hours and fine, other than the leg room, which, had the flight been any longer, would have been unbearable. Don't choose seat 1B (or 1 A which has the same problem. The other seats also looked very crammed in. I'd only go on the airline again on an extra leg room seat. The James Martin meal (pre-order only £10) tasted very nice (chicken curry) but it was very small. Pretty much a starter/ kids meal size with 3-4 small pieces of chicken (and we aren't big eaters). I haven't been on a 'package holiday' style flight before (though we are regular long and short haul travellers). I'd say it is on a par with Ryanair, slightly less favourable than easy jet & Monarch (though meal tasted better) and sub par compared to likes of Iberia and BA. Some of the cabin crew were very nice, there was lots of chit chat and sandwich eating going on though (informal). If the flight was in with a package as a cheap deal, I'd say it would be fair enough. If this were some kind of treat or you wanted to work, then I'd say not.
3/10

✅ Verified Review | Do not bother going Premium Economy on Thomas Cook Airlines A330. A modicum extra of room. Extremely uncomfortable. Sitting virtually upright. No sleep for 8 hours overnight. Spoilt the end of a wonderful holiday. The seats were truly uncomfortable.
11 to 20 of 57 Reviews